Trovebox was a digital photography sharing and management platform. As of March 31, 2015, the service has shut down.

Trovebox was initially started by Jaisen Mathai as a Kickstarter project [1] and launched in December 2011. [2] Trovebox was originally known as OpenPhoto until being rebranded in January 2013. [3]

Trovebox consisted of a platform API, [6] web application, iOS application [7] [8] and Android application. [9] A unique feature of Trovebox was the ability to connect to various cloud storage services including Dropbox, Box, Amazon S3, Dreamhost Dreamobjects and Trovebox's own storage.

Trovebox's server-side, Android app, and iOS client source code is available on GitHub under the Apache open source license for users who prefer to install Trovebox themselves. [10]

Jitsi is a collection of free and open-source multiplatform voice (VoIP), video conferencing and instant messaging applications for the web platform, Windows, Linux, macOS, iOS and Android. The Jitsi project began with the Jitsi Desktop. With the growth of WebRTC, the project team focus shifted to the Jitsi Videobridge for allowing web-based multi-party video calling. Later the team added Jitsi Meet, a full video conferencing application that includes web, Android, and iOS clients. Jitsi also operates meet.jit.si, a version of Jitsi Meet hosted by Jitsi for free community use. Other projects include: Jigasi, lib-jitsi-meet, Jidesha, and Jitsi.

Pebble is a discontinued smartwatch developed by Pebble Technology Corporation. Funding was conducted through a Kickstarter campaign running from April 11, 2012 to May 18, 2012, which raised $10.3 million; it was the most funded project in Kickstarter history, at the time. Pebble began shipping watches to Kickstarter backers in January 2013. Pebble watches can be connected to Android and iOS devices to show notifications and messages. An online app store distributes Pebble-compatible apps from many developers including ESPN, Uber, Runkeeper, and GoPro.

Kivy is a free and open source Python framework for developing mobile apps and other multitouch application software with a natural user interface (NUI). It is distributed under the terms of the MIT License, and can run on Android, iOS, Linux, macOS, and Windows.

Surespot is an open-source instant messaging application for Android and iOS with a focus on privacy and security. For secure communication it uses end-to-end encryption by default.

TextSecure was a free and open-source encrypted messaging application for Android that was first released in May 2010. It was developed by Open Whisper Systems and used end-to-end encryption to secure the transmission of instant messages, group messages, attachments and media messages to other TextSecure users. In November 2015, TextSecure was merged with an encrypted voice calling application called RedPhone and was renamed as Signal.

This article contains a list with gratis satellite navigation software for a range of devices. Some of the free software mentioned here does not have detailed maps or the ability to follow streets or type in street names. However, in many cases, it is also that which makes the program free, avoid the need of an Internet connection, and make it very lightweight. Very basic programs like this may not be suitable for road navigation in cars, but serve their purpose for navigation while walking or trekking, and for use at sea. To determine the GPS coordinates of a destination, one can use sites such as GPScoordinates.eu and GPS visualizer. 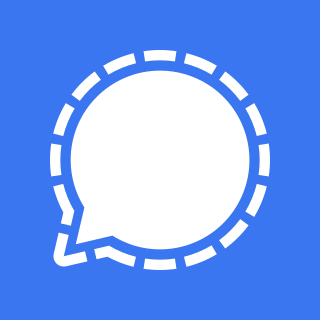 Signal is a cross-platform centralized encrypted messaging service developed by the Signal Technology Foundation and Signal Messenger LLC. Users can send one-to-one and group messages, which can include files, voice notes, images and videos. It can also be used to make one-to-one and group voice and video calls, and the Android version can optionally function as an SMS app.

Eddystone is a Bluetooth Low Energy beacon profile released by Google in July 2015. The Apache 2.0-licensed, cross-platform, and versioned profile contains several frame types, including Eddystone-UID, Eddystone-URL, and Eddystone-TLM. Eddystone-URL is used by the Physical Web project, whereas Eddystone-UID is typically used by native apps on a user's device, including Google's first party apps such as Google Maps.

NativeScript is an open-source framework to develop mobile apps on the Apple iOS and Android platforms. It was originally conceived and developed by Progress. At the end of 2019 responsibility for the NativeScript project was taken over by long-time Progress partner, nStudio. In December 2020 nStudio also oversaw the induction of NativeScript into OpenJS Foundation as an Incubating Project. NativeScript apps are built using JavaScript, or by using any programming language that transpiles to JavaScript, such as TypeScript. NativeScript supports the Angular and Vue JavaScript frameworks. Mobile applications built with NativeScript result in fully native apps, which use the same APIs as if they were developed in Xcode or Android Studio. Additionally, software developers can re-purpose third-party libraries from CocoaPods, Maven, and npm.js in their mobile applications without the need for wrappers.

Firefox Focus is a free and open-source privacy-focused mobile browser from Mozilla, available for Android and iOS smartphones and tablets. Firefox Focus was initially a tracker-blocking application for mobile iOS devices, released in December 2015. It was developed into a minimalistic web browser shortly afterwards. However, it can still work solely as a tracking-blocker in the background of the Safari browser on Apple devices.

LineageOS is an operating system for smartphones, tablet computers, and set-top boxes, based on Android with mostly free and open-source software. It is the successor to the custom ROM CyanogenMod, from which it was forked in December 2016 when Cyanogen Inc. announced it was discontinuing development and shut down the infrastructure behind the project. Since Cyanogen Inc. retained the rights to the Cyanogen name, the project rebranded its fork as LineageOS.

Flutter is an open-source UI software development kit created by Google. It is used to develop cross platform applications for Android, iOS, Linux, Mac, Windows, Google Fuchsia, and the web from a single codebase.

MicroG is a free and open-source implementation of proprietary Google libraries that serves as a replacement for Google Play Services on the Android operating system. It is maintained by German developer Marvin Wißfeld. MicroG allows mobile device users to access Google mobile services with less tracking of their device activity compared to Google Play Services. In a presentation, Wißfeld described microG as "the framework to create a fully-compatible Android distribution without any proprietary Google components".

There are many apps in Android that can run or emulate other operating systems, via utilizing hardware support for platform virtualization technologies, or via terminal emulation. Some of these apps support having more than one emulation/virtual file system for different OS profiles, thus the ability to have or run multiple OS's. Some even have support to run the emulation via a localhost SSH connection (letting remote ssh terminal apps on device access the OS emulation/VM, VNC, and XSDL. If more than one of these apps that support these protocols or technologies are available on the android device, via androids ability to do background tasking the main emulator/VM app on android can be used to launch multiple emulation/vm OS, which the other apps can connect to, thus multiple emulated/VM OS's can run at the same time. However, there are a few emulator or VM apps that require that the android device to be rooted for the app to work, and there are others that do not require such. Some remote terminal access apps also have the ability to access Android's internally implemented Toybox, via device loopback support. Some VM/emulator apps have a fixed set of OS's or applications that can be supported.

Fyne is a free and open-source cross-platform widget toolkit for creating graphical user interfaces (GUIs) across desktop and mobile platforms. Fyne uses OpenGL to provide cross-platform graphics. It is inspired by the principles of Material Design to create applications that look and behave consistently across all platforms. It is licensed under the terms of the 3-clause BSD License, supporting the creation of free and proprietary applications. In December 2019 Fyne became the most popular GUI toolkit for Go, by GitHub star count and in early February 2020 it was trending as #1 project in GitHub trending ranks.