Cloud storage is a model of computer data storage in which the digital data is stored in logical pools. The physical storage spans multiple servers (sometimes in multiple locations), and the physical environment is typically owned and managed by a hosting company. These cloud storage providers are responsible for keeping the data available and accessible, and the physical environment protected and running. People and organizations buy or lease storage capacity from the providers to store user, organization, or application data.

Cloud storage services may be accessed through a colocated cloud computing service, a web service application programming interface (API) or by applications that utilize the API, such as cloud desktop storage, a cloud storage gateway or Web-based content management systems.

Cloud computing is believed to have been invented by Joseph Carl Robnett Licklider in the 1960s with his work on ARPANET to connect people and data from anywhere at any time. [1]

In 1983, CompuServe offered its consumer users a small amount of disk space that could be used to store any files they chose to upload. [2]

In 1994, AT&T launched PersonaLink Services, an online platform for personal and business communication and entrepreneurship. The storage was one of the first to be all web-based, and referenced in their commercials as, "you can think of our electronic meeting place as the cloud." [3] Amazon Web Services introduced their cloud storage service AWS S3 in 2006, and has gained widespread recognition and adoption as the storage supplier to popular services such as SmugMug, Dropbox, and Pinterest. In 2005, Box announced an online file sharing and personal cloud content management service for businesses. [4]

Cloud storage is based on highly virtualized infrastructure and is like broader cloud computing in terms of accessible interfaces, near-instant elasticity and scalability, multi-tenancy, and metered resources. Cloud storage services can be utilized from an off-premises service (Amazon S3) or deployed on-premises (ViON Capacity Services). [5]

Cloud storage typically refers to a hosted object storage service, but the term has broadened to include other types of data storage that are now available as a service, like block storage.

Companies are not permanent and the services and products they provide can change. Outsourcing data storage to another company needs careful investigation and nothing is ever certain. Contracts set in stone can be worthless when a company ceases to exist or its circumstances change. Companies can: [20] [21] [22]

There are several options available to avoid such issues. One option is to use a private cloud instead of a public cloud (there are as well providers that offer private cloud storage). Another option is to ingest data in encrypted format where the key is hold within your on premise infrastructure. Access is often by use of cloud storage gateways that are on premise. Such gateways have options not only to encrypt and compress the data prior of transfer but as well mirror the storage across multiple cloud storage providers and remove the risk of a single providers shutdown. Gateways offer as well the option to cache data on a most recently used algorithm on premise. Along with data analytics data is cached and fetched on a most valuable form instead of recently used only form. 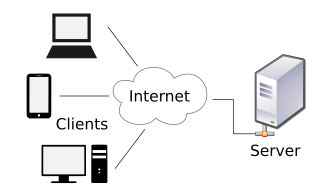 Client–server model is a distributed application structure that partitions tasks or workloads between the providers of a resource or service, called servers, and service requesters, called clients. Often clients and servers communicate over a computer network on separate hardware, but both client and server may reside in the same system. A server host runs one or more server programs, which share their resources with clients. A client does not share any of its resources, but it requests content or service from a server. Clients, therefore, initiate communication sessions with servers, which await incoming requests. Examples of computer applications that use the client-server model are email, network printing, and the World Wide Web.

In telecommunication, provisioning involves the process of preparing and equipping a network to allow it to provide new services to its users. In National Security/Emergency Preparedness telecommunications services, "provisioning" equates to "initiation" and includes altering the state of an existing priority service or capability.

Db2 is a family of data management products, including database servers, developed by IBM. They initially supported the relational model, but were extended to support object-relational features and non-relational structures like JSON and XML. The brand name was originally styled as DB/2, then DB2 until 2017 and finally changed to its present form.

A file hosting service, cloud storage service, online file storage provider, or cyberlocker is an internet hosting service specifically designed to host user files. It allows users to upload files that could be accessed over the internet after a user name and password or other authentication is provided. Typically, the services allow HTTP access, and sometimes FTP access. Related services are content-displaying hosting services, virtual storage, and remote backup.

A remote, online, or managed backup service, sometimes marketed as cloud backup or backup-as-a-service, is a service that provides users with a system for the backup, storage, and recovery of computer files. Online backup providers are companies that provide this type of service to end users. Such backup services are considered a form of cloud computing.

Edge computing is a distributed computing paradigm that brings computation and data storage closer to the location where it is needed, to improve response times and save bandwidth. 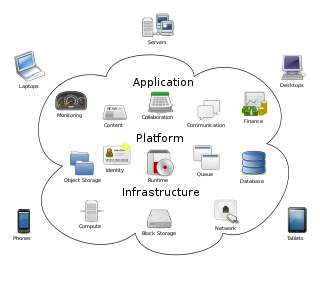 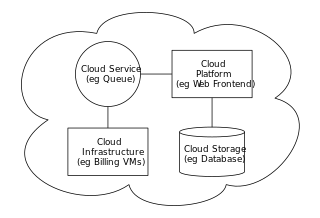 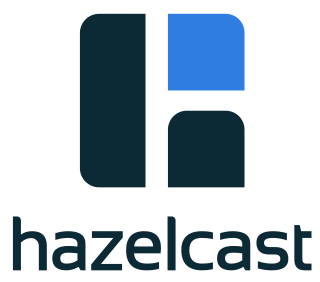 In computing, Hazelcast IMDG is an open source in-memory data grid based on Java. It is also the name of the company developing the product. The Hazelcast company is funded by venture capital and headquartered in San Mateo.

Google Cloud Platform (GCP), offered by Google, is a suite of cloud computing services that runs on the same infrastructure that Google uses internally for its end-user products, such as Google Search, Gmail and YouTube. Alongside a set of management tools, it provides a series of modular cloud services including computing, data storage, data analytics and machine learning. Registration requires a credit card or bank account details.

A personal cloud is a collection of digital content and services which are accessible from any device. The personal cloud is not a tangible entity. It is a place which gives users the ability to store, synchronize, stream and share content on a relative core, moving from one platform, screen and location to another. Created on connected services and applications, it reflects and sets consumers’ expectations for how next-generation computing services will work.

Cloud computing has become a social phenomenon used by most people every day. As with every important social phenomenon there are issues that limit its widespread adoption. In the present scenario, cloud computing is seen as a fast developing area that can instantly supply extensible services by using internet with the help of hardware and software virtualization. The biggest advantage of cloud computing is flexible lease and release of resources as per the requirement of the user. Other benefits encompass betterment in efficiency, compensating the costs in operations. It curtails down the high prices of hardware and software Although, there are numerous benefits of adopting the latest cloud technology still there are privacy issues involved in cloud computing because in the cloud at any time the data can outbreak the service provider and the information is deleted purposely. There are security issues of various kinds related with cloud computing falling into two broader categories: First, the issues related to the cloud security that the cloud providers face. Secondly, the issues related to the cloud security that the customers experience

Cryptographic splitting, also known as cryptographic bit splitting or cryptographic data splitting, is a technique for securing data over a computer network. The technique involves encrypting data, splitting the encrypted data into smaller data units, distributing those smaller units to different storage locations, and then further encrypting the data at its new location. With this process, the data is protected from security breaches, because even if an intruder is able to retrieve and decrypt one data unit, the information would be useless unless it can be combined with decrypted data units from the other locations.