Troy Beebe (born January 5, 1962) is an American former professional auto racing driver. He competed in the NASCAR Busch Series from 1990 to 1997.

Beebe was born in Modesto, California. He made his debut in the premier NASCAR series in 1989, running one race at Sonoma in a car owned by his father. He put the No. 93 Taco Bell Buick into the field in 32nd. From there, he completed all but two laps en route to a 24th.

Beebe would run four races in the series in 1990, switching between his family-owned car and those owned by D.K. Ulrich. He could not top his '89 running, only managing a best finish of 30th at Sonoma. His other three finishes were 37th, 31st and 35th. However, he did record his best career start at Michigan, starting in the 28th slot.

Beebe moved his team to the Busch Series, where they ran 23 races in 1991. He made his debut in the No. 9 Taco Bell car at Richmond, where he put his car in the field in 31st. He would finish that race 24th. The very next race at Martinsville, Beebe managed an 11th place, and shortly afterwards, he earned his season-best qualifying effort of 4th at Hickory. Beebe was more consistent at the end of the year, topping off eleven top-20s in the year with his first career top-10, a 10th-place finish at IRP. It was the highlight of the year that ended with Beebe 22nd in points.

Beebe only managed fourteen starts in 1992, racing his No. 24 Banana Boat Ford. In those starts, Beebe struggled. His best finish of the year was a 15th at Daytona and his only other top-20 finishes were a pair of 16ths. This could largely be explained by seven DNFs, meaning he did not finish half his starts.

Beebe only managed eight more starts in 1993, once again with poor results. His best finish was a 17th place at Orange County. He failed to finish five races that season.

As a result, Beebe only attempted one race in 1994. He managed a 39th place start at Dover, and finished in 32nd after an engine change.

Beebe only ran two races in 1995, which would be the final time he would run a Busch race. He was 36th at Darlington and 43rd at Rockingham. He crashed out of both events and then moved to the Craftsman Truck Series.

Beebe started the inaugural season in 1995, running the No. 10 Chevy at Phoenix, starting 24th and finishing 30th. He managed four more starts on the season in the No. 89 Chevy, recording a best finish of 12th at Saugus. His best start was also at Saugus, which was 13th.

Beebe's last start in any NASCAR series came in 1997, driving the No. 06 Farris Racing Chevy. Beebe started 24th, but only lasted two laps en route to a 39th-place finish at Las Vegas. 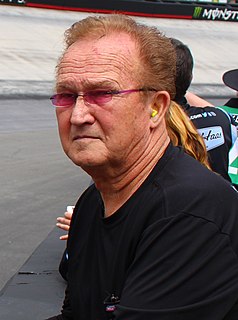 Morgan M. Shepherd is an American semi-retired professional stock car racing driver and current team owner. He last competed part-time in the NASCAR Xfinity Series, driving the No. 89 Chevrolet Camaro for Shepherd Racing Ventures. He currently owns Shepherd Racing Ventures and has Landon Cassill as a full time driver. He is a born again Christian who serves as a lay minister to the racing community. He competed in NASCAR for over 50 years, having one of the longest careers in the sport. Shepherd became the second-oldest race winner in 1993, when he won the spring race at Atlanta at the age of 51 years, 4 months, and 27 days. He holds the record for oldest driver to start a race in a Sprint Cup race at the 2014 Camping World RV Sales 301 at age 72.

Jeffery Purvis is a former race car driver in the NASCAR Xfinity Series. He is a 15-year veteran with four wins and 25 top-five finishes. He suffered a massive brain injury after a 2002 crash and has not run a NASCAR-sanctioned race since 2004. He currently races crate late models at Golden Isles Speedway.

Scott Allan Wimmer is an American professional stock car racing driver. He has a total of six wins in the Xfinity Series. His brother Chris Wimmer competed in the Busch Series. Wimmer co-owns State Park Speedway in Wausau, Wisconsin.

Ashton Lewis Jr. is an American former stock car racing driver who competed in 226 races over 11 seasons. Lewis earned a degree in mechanical engineering from Old Dominion University in Norfolk, Virginia. After his racing career, he earned his MBA from the Fuqua School of Business at Duke University. As of March 2013, he is chief operating officer for First Team Automotive Group in Chesapeake, Virginia. 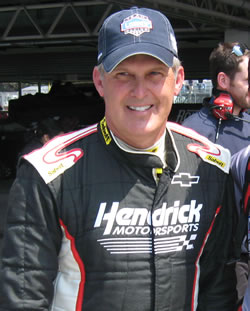 David A. Green is an American former stock car racing driver, who currently works as a NASCAR official. While driving, he won the 1994 NASCAR Busch Series championship. His two younger brothers, Jeff and Mark have also competed in the NASCAR circuit.

Kertus Davis is a NASCAR driver. He is currently the competition director for JD Motorsports.

Ronald Lee Hornaday Jr. is an American former professional stock car racing driver. He is the father of former NASCAR driver Ronnie Hornaday and son of the late Ron Hornaday Sr., a two-time Winston West Champion. Hornaday is a four-time champion in the Camping World Truck Series, his most recent coming in 2009. He was a long-time driver in NASCAR's Winston West Series and is a Featherlite Southwest Tour Champion. He was noticed by Dale Earnhardt while participating in the NASCAR Winter Heat on TNN.

Jeffrey Lynn Green is an American retired professional stock car racing driver and crew chief. He most recently worked for RSS Racing as the crew chief for their No. 28 car in the ARCA Menards Series, driven by Kyle Sieg, and also competed part-time in the NASCAR Xfinity Series as a start and park driver for the team.

Stewart-Haas Racing is an American professional stock car racing team that currently competes in the NASCAR Cup Series, the NASCAR Xfinity Series, ARCA Menards Series West, and eNASCAR Coca-Cola iRacing Series. The team is co-owned by three-time NASCAR Cup Series champion Tony Stewart and Haas Automation founder Gene Haas. It was founded in 2002 as Haas CNC Racing after Haas, whose company was a sponsor of Hendrick Motorsports, elected to form his own team. In 2009, Stewart, who had been driving for Joe Gibbs Racing, made a deal with Haas to drive for the team and in return receive a 50% stake in it. 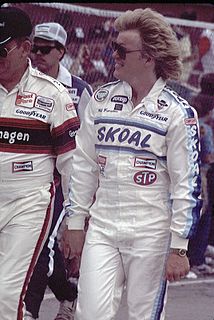 Phillip Parsons is an American former professional stock car racing driver, team owner, and current analyst for FOX NASCAR. He is the younger brother of the 1973 Winston Cup champion and former NBC/TNT commentator Benny Parsons, and the father of current stock car driver Stefan Parsons. After years racing in NASCAR Winston Cup, he returned to the Busch Series where he enjoyed modest success.

Ken Schrader Racing is an American professional stock car racing team that currently competes part-time in the ARCA Menards Series, fielding the No. 52 for Natalie Decker. The team is owned by longtime NASCAR driver Ken Schrader. Over the years, Schrader has also fielded his team in the NASCAR Cup, Xfinity, and Truck Series in addition to in ARCA.

Joseph W. Bessey is a former NASCAR owner/driver. He won one career Busch Series race before heading back to the Busch Grand National North Series in 2001, where he continues to field teams. In his driving career in that series in the mid-1990s, he won 21 races and two championships. Bessey is also a businessman, having started his own trucking companies in his 20s.

Mark Green is an American professional stock car racing driver. He is the brother of drivers, Jeff Green and David Green.

Gary Arnold Bradberry is an American professional stock car racing driver. He raced in the NASCAR All-Pro Series, and had top-ten points finishes from 1990–1993. After that, Bradberry made the jump to major NASCAR leagues. His younger brother was fellow NASCAR driver Charlie Bradberry, who died in an automobile accident in 2006.

Lloyd Doth "L. D." Ottinger is an American former professional stock car racing driver. He raced occasionally in the NASCAR Winston Cup Series during his career. Driving the Black Diamond Coal No. 2 Chevy, he was a Champion in the NASCAR Late Model Sportsman series, predecessor of the Busch Grand National Series.

Mark Day is an American former professional stock car racing driver, racing for a number of years in NASCAR's Busch and Southeast Series, as well as the ARCA Re/Max Series. In addition, his family used to own Day Enterprise Racing, which fielded entries in the Busch Series and ARCA Re/Max Series from 1989 to 2011.