Trumpet tree or trumpet bush may refer to:

Cecropia is a Neotropical genus consisting of sixty-one recognized species with a highly distinctive lineage of dioecious trees. The genus consists of pioneer trees in the more or less humid parts of the Neotropics, with the majority of the species being myrmecophytic. Berg and Rosselli state that the genus is characterized by some unusual traits: spathes fully enclosing the flower-bearing parts of the inflorescences until anthesis, patches of dense indumentums (trichilia) producing Mullerian (food) at the base of the petiole, and anthers becoming detached at anthesis. Cecropia is most studied for its ecological role and association with ants. Its classification is controversial; in the past it has been placed in the Cecropiaceae, Moraceae, or Urticaceae. The modern Angiosperm Phylogeny Group system places the "cecropiacean" group in the Urticaceae.

Cecropia obtusifolia is a species of plant in the Urticaceae family. It is found in Colombia, Costa Rica, Mexico and Panama. Common Names include trumpet tree, pop-a-gun, tree-of-laziness, and snakewood tree. In Central America it is known as Guarumo. Though impressive silhouetted against the sky, it is an invasive species in the islands of Hawaii.

Cecropia peltata is a fast-growing tree in the genus Cecropia. Common names include trumpet tree and snakewood. It is listed as one of the world's 100 worst invasive alien species.

Angel's trumpet may refer to:

Trumpetflower or trumpet flower may refer to several plants:

Campsis is a genus of flowering plants in the family Bignoniaceae, native to woodland in China and North America. It consists of two species, both of which are vigorous deciduous perennial climbers, clinging by aerial roots, and producing large trumpet-shaped flowers in the summer. They are reasonably hardy and do well with the support of a wall, preferring full sun.

Bignoniaceae is a family of flowering plants in the order Lamiales commonly known as the bignonias. It is not known to which of the other families in the order it is most closely related. 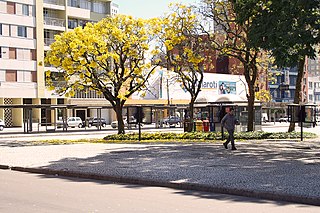 Handroanthus albus, the Golden Trumpet Tree, is a tree with yellow flowers native to Argentina, Paraguay, Bolivia and the Cerrado of Brazil, where it is known as ipê-amarelo-da-serra.

Handroanthus impetiginosus, pink ipê, pink lapacho, or pink trumpet tree is a native tree of family Bignoniaceae of the Americas, distributed from northern Mexico south to northern Argentina. Lapacho is the national tree of Paraguay, and it is also a common tree in Argentina's northeastern region, as well as in southeastern Bolivia. According to Native Trees of Trinidad and Tobago, this tree is not indigenous to Trinidad, it is introduced.

Tabebuia ochracea is a timber tree native to South America, Cerrado and Pantanal vegetation in Brazil. It is very similar and closely related to and often confused with the Golden Trumpet Tree, Tabebuia chrysotricha. It is a seasonal flowering tree, blossoming only during spring (September). During this time, all leaves fall and only flowers remain in the crown.

Handroanthus chrysotrichus, synonym Tabebuia chrysotricha, commonly known as the golden trumpet tree, is a semi-evergreen/semi-deciduous tree from Brazil. It is very similar to and often confused with Tabebuia ochracea. In Portuguese it is called ipê amarelo and is considered the national tree of Brazil.

T. alba may refer to:

Five finger is a common name for various plants, including:

Handroanthus is a genus of flowering plants in the family Bignoniaceae. It consists of 30 species of trees, known in Latin America by the common names poui, pau d'arco, or ipê. The latter sometimes appears as epay or simply ipe (unaccented) in English. The large timber species are sometimes called lapacho or guayacan, but these names are more properly applied to the species Handroanthus lapacho and Handroanthus guayacan, respectively.

Roseodendron is a genus of flowering plants in the family Bignoniaceae. It consists of two species, Roseodendron donnell-smithii and Roseodendron chryseum. The type species for the genus is R. donnell-smithii. Both species are cultivated as ornamentals for their numerous, large, yellow flowers.

Ekmanianthe is a genus of flowering plants in the family Bignoniaceae. It is most closely related to Tabebuia and has sometimes been included within it. It consists of two species of trees, neither of which is especially common in any part of its range. Ekmanianthe longiflora grows to 18 m (59 ft) in height and is native to Haiti and the rocky uplands of central Cuba. Ekmanianthe actinophylla is a smaller tree, to 10 m (33 ft) in height, and it occurs in western Cuba where it is known as "roble caimán", for the resemblance of its trunk bark to the hide of a caiman. "Roble" is a Spanish name that is also applied to Tabebuia. Neither of the species of Ekmanianthe is known in cultivation. The type species for Ekmanianthe is E. longiflora. The wood of Ekmanianthe has been variously described as "soft" or as "very hard, heavy, and strong". Despite this, like many other Tecomeae species, it is rarely cultivated.

Pink trumpet tree is a common name for several plants and may refer to: