Tsatsu Tsikata (born 1 October 1950) is a Ghanaian academic and lawyer. He is also a former Chief Executive of the Ghana National Petroleum Corporation. He is a notable affiliate and legal counsel to the National Democratic Congress and regarded as one of the leading members of the political party. [1] [2]

Tsikata was born in Keta in the south of the Volta Region of Ghana. [3] He was however brought up in Adabraka, a suburb of Accra, the capital of Ghana. He started school at an early age because he wanted to follow his older brother Fui to school. He first attended Additrom Preparatory School and then Mrs Sam's Preparatory School, a school also attended by former President of Ghana Jerry Rawlings. He was again moved to Accra Newtown Experimental School, where he was jumped from Year 2 to Year 3, catching up with his older brother Fui. [4] He won a United Africa Company (UAC) scholarship in 1960 to start his secondary education at the age of nine at the Mfantsipim School where his father and his elder brother, Fui Sokpoli Tsikata also attended. [4] [5] On completion of his five-year course, he gained admission into the University of Ghana, Legon, at the age of 14, where he obtained an LL.B First Class degree at the age of 18 years. Only one other 18-year-old had completed a degree programme at that time. His lecturers included Professor Ofosu Amaah and Dr. Obed Asamoah, a former foreign minister and Attorney General of Ghana. [4] He then won a post-graduate scholarship from the University of Ghana to Oxford University where he again obtained first class honours in Bachelor of Civil Law which is equivalent to a master's degree at other British universities.

Tsikata held a Junior Research Fellowship at Oxford University where he also served as a tutor. [6] On his return to Ghana in 1974, he was appointed a lecturer at the law faculty of the University of Ghana. Some of his students included Kwamena Ahwoi, Alban Bagbin, former majority leader in the Parliament of Ghana and current speaker of the 8th parliament of Ghana, almost all the justices of the current Supreme Court of Ghana including Justice Victor Mawulom Dotse, the Chief Justice Kwasi Anin-Yeboah, Justice Yaw Appau [4]

Tsikata has served as counsel to a number of notable personalities over the years. These include Captain Kojo Tsikata, his cousin, Kofi Awoonor and President Jerry Rawlings in 1979. During the era of the National Redemption Council/Supreme Military Council military regimes of Acheampong, he defended Samuel Okudjeto and William Ofori Atta who stood trial for political reasons. After the May 15 Uprising in 1979, he was counsel for Jerry Rawlings during the treason trial that came to an abrupt end when the SMC military government led by Fred Akuffo was overthrown on 4 June 1979. [6] He was the lead Counsel for the ruling National Democratic Congress (NDC) in an electoral petition in Ghana. He was the lead counsel for the NDC during the first ever electoral petition trial filed by the opposition New Patriotic Party challenging the results of the 2012 elections. [7] The NDC filed a joinder to be the third respondent of this case. [8] He was the lead counsel for John Mahama in the 2020 election petition against the electoral commission and the president. [9]

Tsikata was appointed the Chief Executive of the Ghana National Petroleum Corporation (GNPC) from October 1988 to December 2000 by the then ruling NDC led by Jerry Rawlings.

Tsikata was tried for causing financial loss of GH¢230,000 to the state whilst CEO of Ghana National Petroleum Company after a trial through the Accra Fast Track Tribunal, one of many set up by the Kufuor government to try such cases. The trial started in 2002 and lasted for six years. He was pronounced guilty on 18 June 2008 by Mrs. Justice Hernrietta Abban. [10] The length of the trial is reputed to be the longest ever involving a former government official in the history of the country. Those loyal to President Kufuor's New Patriotic Party government hailed this as a triumph for the judicial system while Tsikata's sympathizers and National Democratic Congress supporters saw the trial as politically motivated. [11] This led to the formation of the "Free Tsatsu Movement". [12] He was granted an unconditional pardon by the then President John Kufuor on his last day of office after his party, the New Patriotic Party lost the Ghanaian presidential election, 2008. At the time, he was on admission at the Korle Bu Teaching Hospital under prison guard following a severe bout of asthma. [13] Tsatsu Tsikata rejected the presidential pardon and announced at a forum later that he felt the pardon was not in good faith and that he would fight through the court system to clear his name. [14] [15]

After rejecting the presidential pardon, by 13 January 2009, Tsikata was granted bail by Justice Edward Amoako Asante at an Accra Fast-Track high court pending appeal meaning he was no longer required to be in jail although he was still admitted at the hospital due to his asthmatic attack. [16] [17] [18] After 8 years of being charged with causing financial loss to the state, on 30 November 2016, he was declared innocent by an Appeals Court presided over by Justice Dennis Adjei and his 5-year jail term was quashed. [19] [16] [20] [21]

Tsikata is Christian and an elder of the Asbury Dunwell Church in Accra. [6] He is a known asthmatic and this appears to have limited his extracurricular activities and school attendance as a child. After he was jailed in 2008, he had an acute asthmatic attack that took him from the Nsawam prisons to intensive care. Tsikata has been a keen cricketer in the past.

Tsikata is one of seven siblings. [1] His father was Godwin Kwaku-Sru Tsikata, a retired Textiles Sales Manager with the United Africa Corporation (UAC). He is married to Esther Cobbah [22] [23] and they have three children. Award-winning Ghanaian musician, M.anifest, is one of his children [24] [2] [25] [26] His older brother Fui Tsikata is also a well known lawyer in Ghana as is his sister Doe Tsikata. [27] He also has another brother Dotse Tsikata.

John Kofi Agyekum Kufuor GCB is a Ghanaian politician who served as the President of Ghana from 7 January 2001 to 7 January 2009. He was also Chairperson of the African Union from 2007 to 2008.

The New Patriotic Party (NPP) is a centre-right and liberal-conservative political party in Ghana. Since the democratisation of Ghana in 1992, it has been one of the two dominant parties in Ghanaian politics, with its leading rival being the centre-left National Democratic Congress (NDC). John Kufuor of the NPP was President of Ghana from 2001 to 2009. At the elections held on 7 December 2004, the party won 129 out of 230 seats. The NPP candidate was Kufuor, who was re-elected as president with 52.75% of the vote. The New Patriotic Party symbol is the African elephant and the New Patriotic Party colours are red, white, and blue. 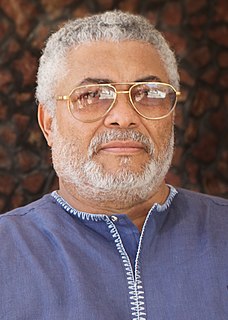 Jerry John Rawlings was a Ghanaian military officer and politician who led the country from 1981 to 2001 and also for a brief period in 1979. He led a military junta until 1992, and then served two terms as the democratically elected President of Ghana.

John Evans Fiifi Atta Mills was a Ghanaian politician and legal scholar who served as President of Ghana from 2009 until his death in 2012. He was inaugurated on 7 January 2009, having defeated the governing party candidate Nana Akufo-Addo in the 2008 election. He was previously the Vice-President from 1997 to 2001 under President Jerry Rawlings, and he contested unsuccessfully in the 2000 and 2004 presidential elections as the candidate of the National Democratic Congress (NDC). He was the first Ghanaian head of state to die in office.

Nana Addo Dankwa Akufo-Addo is a Ghanaian politician who has served as the president of Ghana since 7 January 2017. In 2020, he was re-elected for his second term, which will end on 6 January 2025. Akufo-Addo previously served as Attorney General from 2001 to 2003 and as Minister for Foreign Affairs from 2003 to 2007 under the Kufuor-led administration. He is currently serving his second term as the chairman of the Economic Community of West African States (ECOWAS). 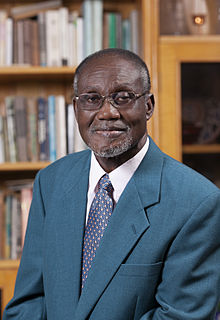 Obed Yao Asamoah is a Ghanaian lawyer, academic and politician. Asamoah was the longest serving foreign minister and Attorney General of Ghana under Jerry Rawlings from 1981 to 1997. Asamoah was educated at King's College London and at Columbia University.

Edward Kwame Wiredu was the Chief Justice of Ghana between 2001 and 2003. He was the tenth since Ghana became an independent nation. He is noted for introducing the Fast Track High Courts in Ghana as well as Alternate Dispute Resolution and the Judicial Institute.

Samuel Azu Crabbe was a Ghanaian barrister, solicitor and jurist. He was the fifth Chief Justice of Ghana since it became an independent nation.

Enoch Teye Mensah is a politician. He was a Minister for Education and a Member of Parliament in Ghana from January 1997 till January 2017. He is popularly referred to as E. T. Mensah. 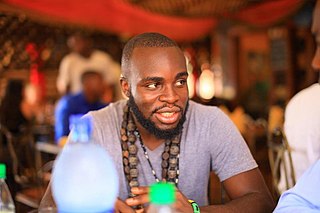 Joachim Amartey Quaye was a Ghanaian politician. He was found guilty of involvement in the murder of four Ghanaian citizens and executed by a firing squad in 1982.

Joe Ghartey is a Ghanaian lawyer, academic and politician. He is a former Attorney-General of Ghana (2006-2009), Second Deputy Speaker of Parliament (2013-2017) and Railways and Development Minister (2017-2021). Joe Ghartey hails from Shama, in the Western Region of the Republic of Ghana.

Joshua Alabi is a Russian-trained Ghanaian academic and politician, who served as the first Vice-Chancellor of the University of Professional Studies, Accra (UPSA) from 2012 to 2016. He previously served as the Rector of the same institution from 2009 to 2012 and Pro-Rector from 2005 to 2008. In Ghanaian politics, Alabi was the National Democratic Congress (NDC) Member of Parliament for the Krowor Constituency in the Greater Accra from 1997 to 2001 and Minister of State for the Greater Accra and the Northern Regions respectively from 1997 to 2001.

Kojo Tsikata was a Ghanaian military officer and politician, who served as the Head of National Security and Foreign Affairs of the Provisional National Defence Council (PNDC). He was listed as a retired army captain in the Ghana Army.

Daniel Ohene Agyekum is a Ghanaian diplomat and politician who is member of the National Democratic Congress (NDC), who served as the former Ambassador to the United States of America during the John Evans Atta Mills government between 2009 and 2013. He has served as Regional Minister for Eastern, Ashanti and Greater Accra regions in the past. He also served as Minister of state in charge of Chieftaincy and State Protocol during the Jerry John Rawlings Government from 2000 to 2001.

Nana Ato Dadzie is a Ghanaian lawyer and politician who served as Chief of Staff during the Jerry John Rawlings administration from 1997 to 2001. He is an expert and a United Nations consultant on peace building and political transitions.

Victor Lawrence Kwashie Selormey was a Ghanaian economist and politician. He was a member of the National Democratic Congress and served as deputy Minister of Finance during the Jerry John Rawlings government.