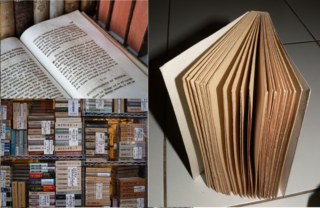 As a physical object, a book is a stack of usually rectangular pages oriented with one edge tied, sewn, or otherwise fixed together and then bound to the flexible spine of a protective cover of heavier, relatively inflexible material. The technical term for this physical arrangement is codex. In the history of hand-held physical supports for extended written compositions or records, the codex replaces its immediate predecessor, the scroll. A single sheet in a codex is a leaf, and each side of a leaf is a page.

A review by Frank Pfenning called it "probably the single most important book in the area of programming languages in recent years." [1]

Frank Pfenning is a professor of computer science, adjunct professor in the department of philosophy, and head of the Computer Science Department at Carnegie Mellon University. He received his Ph.D. from the Carnegie Mellon University Department of Mathematics in 1987, for his dissertation entitled Proof Transformations in Higher-Order Logic. He was a student of Peter B. Andrews.

Programming paradigms are a way to classify programming languages based on their features. Languages can be classified into multiple paradigms.

In logic, a logical framework provides a means to define a logic as a signature in a higher-order type theory in such a way that provability of a formula in the original logic reduces to a type inhabitation problem in the framework type theory. This approach has been used successfully for (interactive) automated theorem proving. The first logical framework was Automath; however, the name of the idea comes from the more widely known Edinburgh Logical Framework, LF. Several more recent proof tools like Isabelle are based on this idea. Unlike a direct embedding, the logical framework approach allows many logics to be embedded in the same type system.

Kenneth Jon Barwise was an American mathematician, philosopher and logician who proposed some fundamental revisions to the way that logic is understood and used.

In computer science and mathematical logic, a proof assistant or interactive theorem prover is a software tool to assist with the development of formal proofs by human-machine collaboration. This involves some sort of interactive proof editor, or other interface, with which a human can guide the search for proofs, the details of which are stored in, and some steps provided by, a computer. 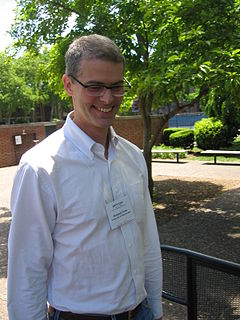 Dependent ML is an experimental functional programming language proposed by Hongwei Xi and Frank Pfenning. Dependent ML extends ML by a restricted notion of dependent types: types may be dependent on static indices of type Nat. Dependent ML employs a constraint theorem prover to decide a strong equational theory over the index expressions.

In type theory, a theory within mathematical logic, the bottom type is the type that has no values. It is also called the zero or empty type, and is sometimes denoted with falsum (⊥).

Peter Bruce Andrews (born 1937) is an American mathematician and Professor of Mathematics, Emeritus at Carnegie Mellon University in Pittsburgh, Pennsylvania, and the creator of the mathematical logic Q0. He received his Ph.D. from Princeton University in 1964 under the tutelage of Alonzo Church. He received the Herbrand Award in 2003. His research group designed the TPS automated theorem prover. A subsystem ETPS (Educational Theorem Proving System) of TPS is used to help students learn logic by interactively constructing natural deduction proofs.

The ACM–IEEE Symposium on Logic in Computer Science (LICS) is an annual academic conference on the theory and practice of computer science in relation to mathematical logic. Extended versions of selected papers of each year's conference appear in renowned international journals such as Logical Methods in Computer Science and ACM Transactions on Computational Logic.

In the branch of mathematical logic known as type theory, System F<:, pronounced "F-sub", is an extension of system F with subtyping. System F<: has been of central importance to programming language theory since the 1980s because the core of functional programming languages, like those in the ML family, support both parametric polymorphism and record subtyping, which can be expressed in System F<:.

In type theory, a refinement type is a type endowed with a predicate which is assumed to hold for any element of the refined type. Refinement types can express preconditions when used as function arguments or postconditions when used as return types: for instance, the type of a function which accepts natural numbers and returns natural numbers greater than 5 may be written as . Refinement types are thus related to behavioral subtyping.

Robert Ian Goldblatt is a mathematical logician who is Emeritus Professor in the School of Mathematics and Statistics at Victoria University, Wellington, New Zealand. His most popular books are Logics of Time and Computation and Topoi: the Categorial Analysis of Logic. He has also written a graduate level textbook on hyperreal numbers which is an introduction to nonstandard analysis.

Fundamental Concepts in Programming Languages were an influential set of lecture notes written by Christopher Strachey for the International Summer School in Computer Programming at Copenhagen in August, 1967. It introduced much programming language terminology still in use today, including "R-value" and "L-value", "ad hoc polymorphism", "parametric polymorphism", and "referential transparency". 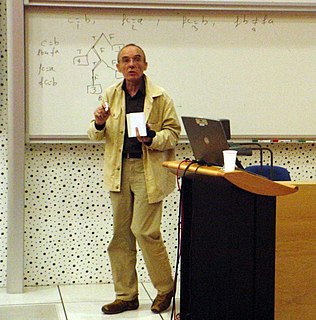 Jean-Pierre Jouannaud is a French computer scientist, known for his work in the area of term rewriting.

Jean Henri Gallier is a researcher in computational logic at the University of Pennsylvania, where he holds appointments in the Computer and Information Science Department and the Department of Mathematics.