Udo Quellmalz (born 8 March 1967 in Leipzig) is a German judoka, who is nicknamed Quelle.

After he retired from competitive judo in 1998, Udo moved to Great Britain where he took the role of British Judo Performance Director. Since 2006 he has worked as head coach for the Austrian judo team and moved back to live in Germany. He is a sports science graduate from Leipzig University in Germany and is a qualified sports teacher.[ citation needed ]

Udo is a masculine given name. It may refer to:

Udo Kiessling is a retired ice hockey player. He competed at all Winter Olympics from 1976 to 1992, thus becoming the first ice hockey player to compete at five Olympics. He represented West Germany at the 1984 Canada Cup. He also played one game for the Minnesota North Stars on March 13, 1982, becoming the first German-trained player to appear in the NHL. He never played another NHL game. He was inducted into the International Ice Hockey Federation Hall of Fame in 2000.

Bjarni Friðriksson is a retired Icelandic judoka. At the 1984 Summer Olympics he won the bronze medal in the men's half heavyweight (95 kg) category, together with Günther Neureuther of West Germany. He remains the most successful Icelandic judoka to date. He also competed at the 1980, 1988 and the 1992 Summer Olympics.

Jens Lehmann is a German politician of the CDU and a former professional cyclist and double Olympic champion. Despite his many successes, he will probably be remembered best as the person caught by Chris Boardman riding the revolutionary Lotus Superbike, in the final of the 1992 Olympic individual pursuit in Barcelona. Lehmann was World Champion at that time. 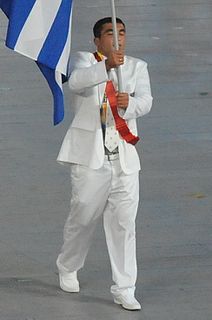 Ilias Iliadis is a Georgian–Greek judoka who has been competing for Greece since the start of his international career.

Udo Hempel is a retired road and track cyclist from West Germany, who won the gold medal in the Men's 4.000 Team Pursuit at the 1972 Summer Olympics in Munich, alongside Günther Schumacher, Jürgen Colombo, and Günter Haritz. In the 1968 Summer Olympics, he had already won silver in the same event. He was a professional cyclist from 1973 to 1983, whose best results were on the track.

Ole Bischof is a German judoka. He is trained by 1984 Olympic gold medalist Frank Wieneke.

Dimitri Peters is a German judoka.

Klaus Köste was a German gymnast. He won a gold medal in the vault at the 1972 Summer Olympics in Munich. He competed for East Germany and won bronze medals in the team all-around event in three Olympics, in 1964, 1968 and 1972. He was particularly strong on the horizontal bar, winning the 1971 and 1973 European championships and a bronze medal at the 1970 World championship in this event.

Angelo Parisi is a French judoka and olympic champion. He won a gold medal in the heavyweight division at the 1980 Summer Olympics in Moscow. At his Olympic debut in 1972 he represented Great Britain.

Benjamin Behrla, known as Benny Behrla, is a German judoka.

Jürg Röthlisberger is a Swiss judoka and olympic champion. He won a gold medal in the middleweight division at the 1980 Summer Olympics in Moscow.

SC DHfK Leipzig e. V.(Sportclub Deutsche Hochschule für Körperkultur Leipzig e. V.) is a sports club in Leipzig, Germany. Until the closure of the sports university DHfK, the club was part of the DHfK. Established was the club in 1954 as a competitive oriented sports club SC Wissenschaft DHfK Leipzig. The club has 6.696 members and is the biggest of Leipzig.

Ashley McKenzie is an English judoka competing at the men's 60 kg division. He was a member of the Great Britain Olympic Judo Team at London 2012 but was defeated in the second round by Hiroaki Hiraoka of Japan. He also appeared in, and made it to the final of Celebrity Big Brother 10 in September 2012. In August 2018, he appeared on the first series of Celebs on the Farm. In January 2020, he appeared on Celebrity Ex on the Beach.

Udo Gurgel is a German engineer and designer of luge, bobsled and skeleton tracks.