Unified Democratic Party (in French: Parti Démocratique Unifié), was, despite its name, not a political party but an electoral alliance of two parties, the Voltaic Democratic Party (PDV-RDA) and the Social Party for the Emancipation of the African Masses (PSEMA), ahead of the 1957 territorial assembly elections in Upper Volta. PDU won 33 out of 70 seats.

After the elections PDU formed a government together with the Voltaic Democratic Movement (MDV). PDU held seven ministries and MDV five. The unity proved short-lived. PSEMA and MDV revolted against the vice-president Ouezzine Coulibaly and formed an opposition bloc, Voltaic Solidarity. Thus PDU was no more.

Voltaic Democratic Movement was a political party in Upper Volta, led by Gérard Kango Ouédraogo. MDV was founded in 1955.

Voltaic Solidarity was a political alliance in Upper Volta formed after the territorial elections in 1957. SV was constituted by the Social Party for the Emancipation of the African Masses (PSEMA), African Popular Movement (MPA) and the Voltaic Democratic Movement (MDV). SV demanded the resignation of the vice-president of the territory, Ouezzin Coulibaly. A motion of no-confidence was called for, but four SV deputes sided with the government and the motion was defeated. One of those four deputies was Maurice Yaméogo, who joined the African Democratic Rally. 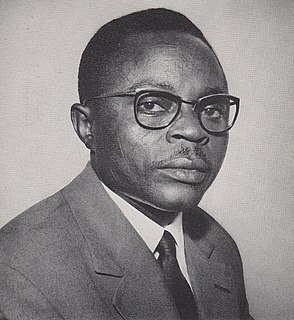 Maurice Yaméogo was the first President of the Republic of Upper Volta, now called Burkina Faso, from 1959 until 1966.

Party of Independents, was a political party in Upper Volta, formed through a split in the Voltaic Democratic Union (UDV-RDA). The party contested the 1970 elections.

Voltaic Union was a political party in Upper Volta. It was formed soon after World War II on the initiative of the French governor Albert Mouragues, and Mouragues was accused of interference in the June 1948 local elections on behalf of the party. Also known as the Union pour la Défense des Interêts de la Haute Volta (UDIHV), it was an alliance of young Catholic-trained Voltaics and traditional chiefs opposed to domination by the Ivory Coast. Early members included Joseph Conombo, Henri Guissou, Joseph Ouedraogo and Maurice Yaméogo.

Social Party for the Emancipation of the African Masses was a political party in Upper Volta, led by Joseph Conombo and Henri Guissou. PSEMA was founded in 1955 following a split in the Voltaic Union.

Territorial Assembly elections were held in French Upper Volta on 31 March 1957. The result was a victory for the Unified Democratic Party, which won 33 of the 68 seats in the Assembly.

Ali Barraud N'Goni was a Burkinabé politician who served as Minister of Public Health and Population for Upper Volta. He resigned his position on January 22, 1974. He was involved in the 1948 founding of the Voltaic Democratic Party (PDV), which joined with the Social Party for the Emancipation of the African Masses (PSEMA) in 1956 to form the Unified Democratic Party (PDU) electoral alliance. From 1957 to 1959 he served as a member of the delegation of Upper Volta to the Grand Council of French Western Africa. In 1971 he was elected Vice-Chairman of the Executive Board of the World Health Organization.

Parliamentary elections were held in the Republic of Dahomey on 11 December 1960. The result was a victory for the Dahomeyan Unity Party (PDU), a merger of the Dahomeyan Democratic Rally and the Dahomey Nationalist Party, which won all 60 seats. Voter turnout was 71.0%.

Henri Guissou was a Burkinabé politician and diplomat.

Parliamentary elections were held in the Republic of Upper Volta on 7 November 1965. The country had been a one-party state since 1960, with the Voltaic Democratic Union-African Democratic Rally as the sole legal party. It therefore won all 75 seats in the National Assembly. Voter turnout was 97.4%.

Parliamentary elections were held in the Republic of Upper Volta on 20 December 1970, following the restoration of multi-party democracy in a referendum earlier in the year. The result was a victory for the former sole legal party, the Voltaic Democratic Union-African Democratic Rally, which won 37 of the 57 seats in the National Assembly. Voter turnout was 48.3%.

Parliamentary elections were held in the Republic of Upper Volta on 30 April 1978. They followed a constitutional referendum the previous year, which came about as a result of the military coup in 1974. Eight parties and 367 candidates contested the election.

The African Regroupment Party was a political party in the French African colonies.

The Democratic Union Party was a political group in Romania, one of the political forces which claimed to represent the ethnic Romanian community of Bukovina province. The PDU was active in the wake of World War I, between 1919 and 1923, having for its leader the historian and nationalist militant Ion Nistor. It was formed by Nistor and other activists who wrote for the regional periodical Glasul Bucovinei, and, as a consequence, the party members were commonly referred to as Glasiști ("Glas-ists").

The Dahomeyan Unity Party was a political party in the Republic of Dahomey.

The Kaya Independent Party was a political party in Burkina Faso.