The Union Pacific Harriman Dispatch Center is located at 850 Jones Street in downtown Omaha, Nebraska. Called "the Bunker" by some, the Harriman is Union Pacific's rail traffic control headquarters, where the movement of more than 850 trains and nearly 36,000 [1] miles of track across the country is controlled and monitored. Originally a freight depot, [2] the building was redeveloped in the early 1990s as a way to unite 10 regional dispatch centers the UP once ran across the country. [3]

The headquarters for Union Pacific, called the Union Pacific Center, is located nearby in downtown Omaha, Nebraska. [4]

Council Bluffs is a city in and the county seat of Pottawattamie County, Iowa, United States. The city is the most populous in Southwest Iowa, and is a primary city of the Omaha-Council Bluffs Metropolitan Area. It is located on the east bank of the Missouri River, across from the city of Omaha, Nebraska. Council Bluffs was known, until at least 1853, as Kanesville. It was the historic starting point of the Mormon Trail. Kanesville is also the northernmost anchor town of the other emigrant trails, since there was a steam-powered boat to ferry their wagons, and cattle, across the Missouri River. 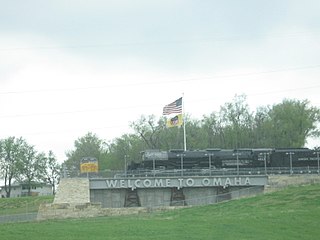 Kenefick Park is located at 100 Bancroft Street in South Omaha, Nebraska, next to the Lauritzen Gardens, Omaha's botanical gardens. Kenefick Park features "two of the greatest locomotives ever to power Union Pacific Railroad": EMD DDA40X #6900,the first of the class, and Union Pacific Big Boy #4023. 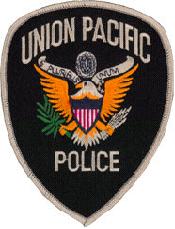 The Union Pacific Police Department is the law enforcement agency of the Union Pacific Railroad. Its headquarters is in Omaha, Nebraska and its current Chief of Police is Robert Morrison. The railroad police force dates to the 1850s, when the number of U.S. Marshals was insufficient to police America's growing rail network. U.S. Marshals were replaced with a private police company, the North-Western Police Agency, later known as the Pinkerton Agency. Officers were called Pinkertons, named after their originator, Allan Pinkerton, who founded the private police company in 1855 with Chicago attorney Edward Rucker. Today, the Union Pacific Police Department is one of the sixteen Class I railroad law enforcement agencies across the country. 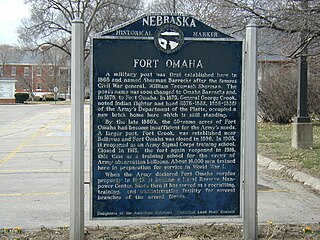 Fort Omaha, originally known as Sherman Barracks and then Omaha Barracks, is an Indian War-era United States Army supply installation. Located at 5730 North 30th Street, with the entrance at North 30th and Fort Streets in modern-day North Omaha, Nebraska, the facility is primarily occupied by Metropolitan Community College. A Navy Operational Support Center and Marine Corps Reserve unit, along with an Army Reserve unit occupy the periphery of the 82.5 acres (33.4 ha) fort. The government deeded all but four parcels of the land to the community college in 1974. 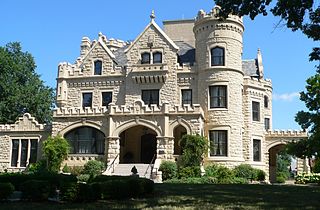 The Gold Coast Historic District is located in Midtown Omaha, Nebraska. Listed on the National Register of Historic Places in 1997, this historic district covers approximately a 30 block area roughly bounded by 36th, 40th, Jones, and Cuming Streets. The neighborhood housed many of Omaha's cultural and financial leaders between 1900 and 1920, taking over from Omaha's original Gold Coast in prominence.

Little Italy is a neighborhood in Omaha, Nebraska which served as the historic home to Omahans of Italian ancestry. It was the source of many laborers for the Union Pacific railroad, much of Omaha's bootlegging during Prohibition and the Santa Lucia Procession, which started in 1924 and continues annually.

Little Bohemia, or Bohemian Town, is a historic neighborhood in Omaha, Nebraska. Starting in the 1880s, Czech immigrants settled in this highly concentrated area, also called "Praha" (Prague) or "Bohemian Town", bounded by South 10th Street on the east, South 16th Street on the west, Pierce Street on the north, and Martha Street on the south, with a commercial area went along South 13th and South 14th Streets, centered on William Street. It was located south of downtown, and directly west of Little Italy. A portion of the neighborhood along South 13th Street was listed on the National Register of Historic Places in 2020.

The Union Stockyards of Omaha, Nebraska, were founded in 1883 in South Omaha by the Union Stock Yards Company of Omaha. A fierce rival of Chicago's Union Stock Yards, the Omaha Union Stockyards were third in the United States for production by 1890. In 1947 they were second to Chicago in the world. Omaha overtook Chicago as the nation's largest livestock market and meat packing industry center in 1955, a title which it held onto until 1971. The 116-year-old institution closed in 1999. The Livestock Exchange Building was listed on the National Register of Historic Places in 1999.

The economy of Omaha, Nebraska has served as a major commercial hub in the Midwestern United States since its founding in 1854. Dubbed the "Motor Mouth City" by The New York Times, Omaha is widely regarded as the telecommunications capital of the United States. The city's economy includes agriculture, food processing, insurance, transportation, healthcare and education. Warren Buffett of Berkshire Hathaway has lived in Omaha all of his life, as have the ConAgra Foods, Union Pacific Railroad and Mutual of Omaha Companies, and Kiewit Corporation, all Fortune 500 corporations.

Sheelytown was a historic ethnic neighborhood in South Omaha, Nebraska, USA with populations of Irish, Polish and other first generation immigrants. Located north of the Union Stockyards, it was bounded by Edward Creighton Boulevard on the north, Vinton Street on the south, South 24th Street to the east, and 35th Street to the west. Sheelytown was named for the Sheely Brothers Packing Houses that were located in the area. Sheelytown was annexed by Omaha in 1887. The Omaha Quartermaster Depot was built just east of the community across the Union Pacific tracks. 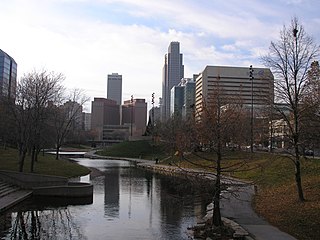 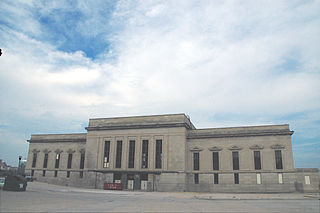 Railroads in Omaha, Nebraska, have been integral to the growth and development of the city, the state of Nebraska, the Western United States and the entire United States. The convergence of many railroad forces upon the city was by happenstance and synergy, as none of the Omaha leaders had a comprehensive strategy for bringing railroads to the city.

Augustus Kountze was an American businessman based in Omaha, Nebraska, Kountze, Texas and New York City. He founded a late 19th-century national banking dynasty along with his brothers Charles, Herman and Luther.

The Union Pacific Railroad Omaha Shops Facility was a 100-acre (0.40 km2) shop for the trains of the Union Pacific located at North 9th and Webster in Downtown Omaha. With the first locomotives arriving in 1865, it took until the 1950s for the facility to become the major overhaul and maintenance facility for the railroad. This lasted until 1988 when UP moved most of the operations out-of-state. Demolition began soon afterwards.

The Cozzens House Hotel, later known as the Canfield House, was a pioneer hotel located at 9th & Harney Streets in downtown Omaha, Nebraska. Constructed in by Union Pacific promoter George Francis Train, the 120-room hotel cost $60,000 to build in 1867. The hotel was widely regarded as the finest hotel between Chicago, Illinois and San Francisco, California when it was constructed.

The Herndon House, later known as the International Hotel and then the Union Pacific Headquarters, was an early hotel located at Ninth and Farnam Streets in present-day Downtown Omaha, Nebraska. Built in 1858 by Omaha pioneer Dr. George L. Miller along with several associates, it was financed by the sale of city-donated land and a $16,000 loan. It was used as the headquarters building of the Union Pacific Railroad for more than 50 years; it was demolished in 1922.

St. John the Baptist Greek Orthodox Church is located at 602 Park Avenue in Midtown Omaha, Nebraska. The original congregation was formed in 1907 to meet the needs of Omaha's then-burgeoning Greek community. The current building is a city landmark that was originally constructed in 1908 for Omaha's Temple Israel, and was sold to the St. John's parish in 1951.