In the 2012-2013 school year, Union Parish public schools had the highest rate of improvement statewide in the annual end-of-course examinations administered in Algebra I and English II. [1]

Union Parish Junior High was originally named Farmerville Junior High, but was changed in 2014. The principal of this complex is currently Kristy Auger. 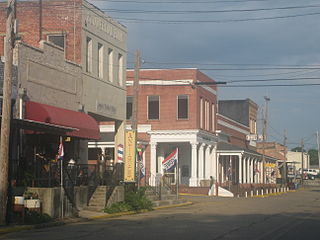 Arcadia is a town in, and the parish seat of, Bienville Parish in north Louisiana, United States. The population was 2,919 at the 2010 census. Arcadia has the highest elevation of any town in Louisiana.

Choudrant is a village in Lincoln Parish, Louisiana, United States. The population was 845 at the 2010 census. It is part of the Ruston Micropolitan Statistical Area.

Bastrop is the largest city and the parish seat of Morehouse Parish, Louisiana, United States. The population was 11,365 at the 2010 census, a decrease of 1,623 from the 12,988 tabulation of 2000. The population of Bastrop is 73 percent African American. It is the principal city of and is included in the Bastrop, Louisiana Micropolitan Statistical Area, which is included in the Monroe-Bastrop, Louisiana Combined Statistical Area.

Sterlington is a town in northern Ouachita Parish, Louisiana, United States, near the boundary with Union Parish. At the 2010 census, the population was 1,594. In the 2018 census estimates, the population rose to 2,724. The current figure tabulation shows Sterlington the fastest-growing community in Northeast Louisiana. 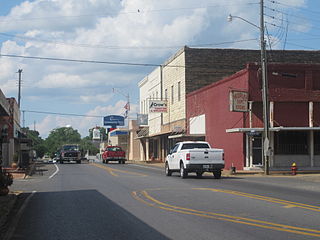 Farmerville is a town in, and the parish seat of, Union Parish, Louisiana, United States. The population was 3,860 at the 2010 census. It is part of the Monroe Metropolitan Statistical Area. The town is spread about Lake D'Arbonne, a popular fishing and boating waterway.

Marion is a town in Union Parish, Louisiana, United States. The population was 765 at the 2010 census, a decrease from 806 at the 2000 census. This population includes the village of Truxno in the northwestern corner of the city limits. It is part of the Monroe Metropolitan Statistical Area.

Lake D’Arbonne is a reservoir located near and around the town of Farmerville in Union Parish in north Louisiana. Isolated in a rural area, it is a popular man-made fishing area that has a combined estimated area of 15,250 acres (62 km2). The lake was first conceived in 1957. The 2450-feet long concrete dam was built in 1961 by the Louisiana Department of Public Works and the resulting lake took shape by 1963 behind the 54-feet tall dam. Lake D’Arbonne State Park, a state maintained camping and recreation area, lies on the lake.

Hoboken High School (HHS) is a four-year comprehensive public high school serving students in ninth through twelfth grades, located in Hoboken, in Hudson County, United States, operating as the lone secondary school of the Hoboken Public Schools. The school has been accredited by the Middle States Association of Colleges and Schools Commission on Elementary and Secondary Schools since 1928.

West Monroe High School is a high school in West Monroe, Louisiana, United States. It is administered by the Ouachita Parish School Board. WMHS is fully accredited by the Southern Association of Colleges and Schools. The school's mascot is The Rebel Man.

Michael Arthur Walsworth is an American real estate developer from West Monroe, Louisiana, who is a former Republican member for District 33 of the Louisiana State Senate, holding the seat from 2008 until 2020. He previously represented District 15 in the Louisiana House of Representatives until term-limited.

Istrouma High School is an accredited public school located in Baton Rouge, Louisiana, United States. It was founded in 1917, and is located in East Baton Rouge Parish. Its name is a local Indian word meaning "red stick". Red stick is also the English language translation of the French words baton rouge. The area of north Baton Rouge where the school is located is also known as the Istrouma area.

South Terrebonne High School is a public secondary school in Bourg, Louisiana, United States. It is a part of the Terrebonne Parish School District.

Louisiana Highway 33 (LA 33) is a state highway located in northern Louisiana. It runs 44.03 miles (70.86 km) in a southwest to northeast direction from U.S. Highway 80 (US 80) in Ruston to the Arkansas state line north of Marion.

Robert Ermon Shadoin, known principally as Rob Shadoin, is a Republican former member of the Louisiana House of Representatives for District 12, which includes Lincoln and Union parishes in North Louisiana. An attorney in Ruston, Louisiana, Shadoin resigned his legislative seat in 2018 to join the administration of Democratic Governor John Bel Edwards as the deputy counsel in the Louisiana Department of Wildlife and Fisheries under agency secretary Jack Montoucet.

James Peyton Smith, known as James P. Smith, was a Democratic member of the Louisiana House of Representatives from Union and Morehouse parishes in North Louisiana, a position which he held from 1964 to 1972 during the administration of Governor John McKeithen. In the first term he represented only Union Parish. Thereafter from 1972 to 1992, he was the sergeant-at-arms of the Louisiana State Senate.