UNESCO leads the United Nations Literacy Decade (UNLD) under the slogan of "Literacy as Freedom". Launched at UN Headquarters in 2003, the Decade aims to increase literacy levels and to empower all people everywhere. In declaring this Decade, the international community recognised that the promotion of literacy is in the interest of all, as part of efforts towards peace, respect and exchange in a globalizing world.

At the request of the UN General Assembly, UNESCO is coordinating the Decade and its international activities. UNESCO launched the Literacy Initiative for Empowerment (LIFE) in 2005 as a framework for achieving the Decade's goals. [1]

The UN Literacy Decade expresses the collective will of the international community to promote a literate environment for all, girls and boys, women and men in both developing and developed countries. The Decade was established for three reasons:

In response to these factors, efforts undertaken during the Decade are to target the poorest and most marginal social groups (including women) and to accompany initiatives to reduce poverty. According to the draft proposal and plan for the UNLD, "Literacy policies and programmes today require going beyond the limited view of literacy that has dominated in the past. Literacy for all requires a renewed vision of literacy…." In order to survive in today‘s globalized world, it has become necessary for everyone to learn new forms of literacy and to develop the ability to locate, evaluate and effectively use information in a variety of ways.

Resolution 56/116 adopted by the General Assembly entitled United Nations Literacy Decade: education for all [1] evokes that literacy is crucial to the acquisition, by every child, youth and adult, of essential life skills that enable them to address the challenges they can face in life, and represents an essential step in basic education, which is an indispensable means for effective participation in the societies and economies of the twenty-first century. It also affirms that the realization of the right to education, especially for girls, contributes to the eradication of poverty.

The Education for All goal of increasing literacy rates by 50% by 2015 provides the overall target for the Decade, and the Millennium Development Goals set the Decade in the context of poverty reduction.

UNESCO's Literacy Initiative for Empowerment (LIFE) is a global strategic framework for the implementation of United Nations Literacy Decade (2003–2012), in order to meet the Education for All (EFA) goals, with particular focus on adult literacy and out-of-school children. It was created when it became apparent that existing literacy efforts would not be sufficient to achieve a 50 per cent improvement in levels of adult literacy by 2015. LIFE targets the 35 countries that have a literacy rate of less than 50 percent or a population of more than 10 million people who cannot read nor write. Eighty-five percent of the world's non-literate population resides in these countries, and two-thirds are women and girls. The UNESCO Institute for Lifelong Learning (UIL) [4] is coordinating LIFE. [5] [6]

Halfway through the United Nations Literacy Decade (UNLD) 2003-2012, UNESCO has conducted a review of progress. The review has been a key opportunity to take stock and set a clear direction for the promotion of literacy between 2007 and 2012 in all key areas of the UNLD Plan of Action. [7]

Taking place during 2007 and 2008, the review has used the 2006 Education for All Global Monitoring Report [8] as a benchmark. It also used the momentum generated from the Regional Conferences to promote stronger policies and greater investment in literacy. The review aimed to identify concrete actions for the second half of the Decade. UNESCO has set up a UNLD Experts' Group which advised on the further development of the UN Literacy Decade as well as on other literacy related matters. The results of the mid-decade review have been submitted to the UN General Assembly in October 2008. 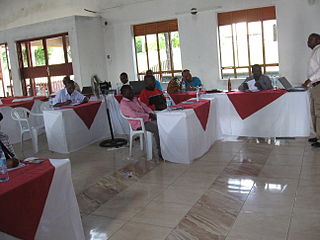 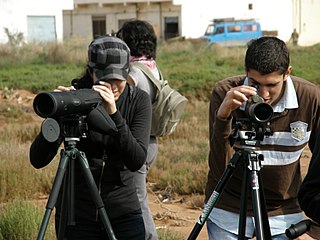 Environmental education (EE) refers to organized efforts to teach how natural environments function, and particularly, how human beings can manage behavior and ecosystems to live sustainably. It is a multi-disciplinary field integrating disciplines such as biology, chemistry, physics, ecology, earth science, atmospheric science, mathematics, and geography. The United Nations Educational, Scientific and Cultural Organisation (UNESCO) states that EE is vital in imparting an inherent respect for nature among society and in enhancing public environmental awareness. UNESCO emphasises the role of EE in safeguarding future global developments of societal quality of life (QOL), through the protection of the environment, eradication of poverty, minimization of inequalities and insurance of sustainable development. The term often implies education within the school system, from primary to post-secondary. However, it sometimes includes all efforts to educate the public and other audiences, including print materials, websites, media campaigns, etc.. There are also ways that environmental education is taught outside the traditional classroom. Aquariums, zoos, parks, and nature centers all have ways of teaching the public about the environment.

Eco-Schools is an international programme of the Foundation for Environmental Education (FEE) that aims to “empower students to be the change our sustainable world needs by engaging them in fun, action-orientated, and socially responsible learning.” 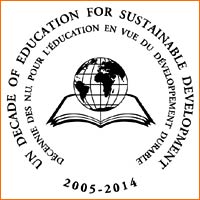 Literacy in India is a key for socio-economic progress. Despite government programmes, India's literacy rate increased only "sluggishly". The 2011 census, indicated a 2001–2011 decadal literacy growth of 9.2%, which is slower than the growth seen during the previous decade. An old analytical 1990 study estimated that it would take until 2060 for India to achieve universal literacy at then-current rate of progress.

International Literacy Day is an international observance, celebrated each year on 8 September, that was declared by UNESCO on 26 October 1966 at the 14th session of UNESCO's General Conference. It was celebrated for the first time in 1967. Its aim is to highlight the importance of literacy to individuals, communities and societies. Celebrations take place in several countries.

Education For All (EFA) is a global movement led by UNESCO, aiming to meet the learning needs of all children, youth and adults by 2015.

The United Nations Decade for Women was a period from 1975 to 1985 focused on the policies and issues that impact women, such as pay equity, gendered violence, land holding, and other human rights. It was adopted December 15, 1975, by the United Nations General Assembly by Resolution 31/136.

Education in Niger, as in other nations in the Sahelian region of Africa, faces challenges due to poverty and poor access to schools. Although education is compulsory between the ages of seven and fifteen, with primary and secondary school leading into optional higher education, Niger has one of the lowest literacy rates in the world. With assistance from external organizations, Niger has been pursuing educational improvement, reforming how schools utilize languages of instruction, and exploring how the system can close gender gaps in retention and learning.

The United Nations Educational, Scientific and Cultural Organization is a specialised agency of the United Nations (UN) aimed at promoting world peace and security through international cooperation in education, the sciences, and culture. It has 193 member states and 11 associate members, as well as partners in the nongovernmental, intergovernmental, and private sector. Headquartered at the World Heritage Centre in Paris, France, UNESCO has 53 regional field offices and 199 national commissions that facilitate its global mandate.

Females in Nigeria have a basic human right to be educated and this right has been recognized since the 1948 adoption of the Universal Declaration on Human Rights. According to a report in 2014, female education has an important impact on the development of a stable, prosperous and healthy nation state resulting in active, productive and empowered citizens. Educating girls develops growth rates and reduces social disparities. In 2009, the Nigerian Population Council (NPC) observed that women with higher educational qualifications are more likely to be in formal wage employment than those at the level of primary school education.

Action for Climate Empowerment (ACE) is a term adopted by the United Nations Framework Convention on Climate Change (UNFCCC). It refers to Article 6 of the Convention's original text (1992), focusing on six priority areas: education, training, public awareness, public participation, public access to information, and international cooperation on these issues. The implementation of all six areas has been identified as the pivotal factor for everyone to understand and participate in solving the complex challenges presented by climate change. The importance of ACE is reflected in other international frameworks such as the Sustainable Development Goals ; the Global Action Programme for Education for Sustainable Development ; the Aarhus Convention (2011); the Escazú Agreement (2018) and the Bali Guidelines (2010).