The hospital was started with loan facility from the Israeli Government. The project will cost $217 million. [3]

Korle-Bu Teaching Hospital (KBTH) is the premier health-care facility in Ghana. Located in Accra, it is the only public tertiary hospital in the southern part of the country. It is a teaching hospital affiliated with the medical school of the University of Ghana. Three centres of excellence, the National Cardiothoracic Centre, the National Plastic and Reconstructive Surgery and the Radiotherapy Centres are all part of it. In 2019, the hospital gained a license from the Health Facilities Regulatory Agency (HeFRA), after meeting the requirement.

Akua Kuenyehia is a Ghanaian lawyer who served as judge of the International Criminal Court (ICC) from 2003 to 2015. She also served as First Vice-President of the Court. She was one of the only three female African judges at the ICC.

Cecil Jones Attuquayefio was a Ghanaian football player and coach. 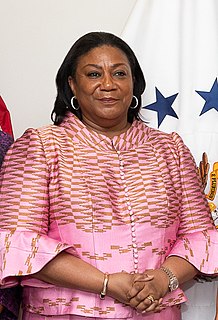 Rebecca Naa Okaikor Akufo-Addo is a Ghanaian public figure and the current First Lady of Ghana as the wife of President Nana Akufo-Addo, 5th President of the 4th Republic of Ghana.

Marian Ewurama Addy was a Ghanaian biochemist and the first Host of the National Science and Maths Quiz. The first Ghanaian woman to attain the rank of full professor of natural science, Addy became a role model for school girls and budding female scientists on the limitless opportunities in science, technology, engineering and mathematics (STEM) disciplines. Marian Addy was also a Fellow of the Ghana Academy of Arts and Sciences, elected in 1999. In the same year, she was awarded the UNESCO Kalinga Prize for the Popularization of Science.

The 37 Military Hospital is a specialist hospital located in Accra, on the main road between Kotoka International Airport and central Accra. It is the largest military hospital in the Republic of Ghana after the Korle-Bu Teaching Hospital. The name 37 was because it was the 37th military hospital to be built in the British colony of West Africa. The hospital is also known for the story of the bats who never left their chief.

Brigadier General Dr. Jaswant Wadhwani is a Ghanaian medical doctor and a retired Senior Army Officer. He was also a former Commanding Officer of the 37 Military Hospital and a lecturer at the University of Ghana Medical School where he lectured Pathology.

Ekow Mensah is a Ghanaian social entrepreneur and speaker who is founder and CEO of The African Network of Entrepreneurs.

Bernard Okoe-Boye is a Ghanaian politician and member of the Seventh Parliament of the Fourth Republic of Ghana representing the Ledzokuku Constituency in the Greater Accra Region on the ticket of the New Patriotic Party. He is currently the Board Chairman of the Korle Bu Teaching Hospital, the nation's largest medical facility.

Ian Frederick Adukwei Hesse, is a Ghanaian academic, physician and a Presbyterian minister. He was on the faculty at the Department of Physiology at the University of Ghana Medical School, a consultant physician as well as a co-founder and the Vice President of Accra College of Medicine. He was formerly Assistant Secretary and later Vice-President of the Ghana Medical Association. He is an ordained minister of the Presbyterian Church of Ghana. He is involved in prison reform and ministry in Ghana.

Most governments decided to temporarily close educational institutions in an attempt to reduce the spread of COVID-19. As of 12 January 2021, approximately 825 million learners are currently affected due to school closures in response to the pandemic. According to UNICEF monitoring, 23 countries are currently implementing nationwide closures and 40 are implementing local closures, impacting about 47 percent of the world's student population. 112 countries' schools are currently open.