Vendor Bid Analysis (Vendor analysis) is a technique used to figure out the cost of a project by comparing the bids submitted by many suppliers. This can be accomplished by considering the costs (via quotes, bids, proposals, etc.) presented for project work. By using a selection criteria divided into categories, vendor proposals have to meet these criteria or may be eliminated. [1] [2] [3]

While analyzing the bids of a product or service, the buying side may consider the following:

Construction bidding is the process of submitting a proposal (tender) to undertake, or manage the undertaking of a construction project. The process starts with a cost estimate from blueprints and material take offs.

Design–bid–build, also known as Design–tendertraditional method or hardbid, is a project delivery method in which the agency or owner contracts with separate entities for the design and construction of a project.

Project management is the practice of initiating, planning, executing, controlling, and closing the work of a team to achieve specific goals and meet specific success criteria at the specified time.The primary challenge of project management is to achieve all of the project goals within the given constraints. This information is usually described in project documentation, created at the beginning of the development process. The primary constraints are scope, time, quality and budget. The secondary—and more ambitious—challenge is to optimize the allocation of necessary inputs and apply them to meet pre-defined objectives.

A request for proposal (RFP) is a document that solicits proposal, often made through a bidding process, by an agency or company interested in procurement of a commodity, service, or valuable asset, to potential suppliers to submit business proposals. It is submitted early in the procurement cycle, either at the preliminary study, or procurement stage.

Procurement is the process of finding and agreeing to terms, and acquiring goods, services, or works from an external source, often via a tendering or competitive bidding process.

A term of business proposal is a written offer from a seller to a prospective buyer. Business proposals are often a key step in the complex sales process—i.e., whenever a buyer considers more than price in a purchase.

Purchasing is a business or organization attempting to acquire goods or services to accomplish its goals. Although there are several organizations that attempt to set standards in the purchasing process, processes can vary greatly between organizations. Typically the word purchasing is not used interchangeably with the word procurement, since procurement typically includes expediting, supplier quality, and transportation and logistics (T&L) in addition to purchasing.

A general contractor, main contractor or prime contractor is responsible for the day-to-day oversight of a construction site, management of vendors and trades, and the communication of information to all involved parties throughout the course of a building project.

A feasibility study is an assessment of the practicality of a proposed project or system.

Construction management (CM) is a professional service that uses specialized, project management techniques to oversee the planning, design, and construction of a project, from its beginning to its end. The purpose of CM is to control a project's time / delivery, cost and quality—sometimes referred to as a project management triangle or "triple constraints." CM is compatible with all project delivery systems, including design-bid-build, design-build, CM At-Risk and Public Private Partnerships. Professional construction managers may be reserved for lengthy, large-scale, high budget undertakings, called capital projects.

A call for bids, call for tenders, invitation to tender, invitation for bid (IfB) or invitation to bid (ItB) or notice inviting tenders is a procedure for generating competing offers from different bidders looking to obtain an award of business activity in works, supply, or service contracts, often from companies who have been previously assessed for suitability by means of a supplier questionnaire or pre-qualification questionnaire (PQQ).

Government procurement in the United States is the process by which the federal, state and local government bodies in the United States acquire goods, services, and interests in real property. In FY 2016 alone, the US Federal Government spent $461B on contracts. Contracts for federal government procurement usually involve appropriated funds spent on supplies, services, and interests in real property by and for the use of the Federal Government through purchase or lease, whether the supplies, services, or interests are already in existence or must be created, developed, demonstrated, and evaluated. See 48 C.F.R. § 2.101. Federal Government contracting has the same legal elements as contracting between private parties: a lawful purpose, competent contracting parties, an offer, an acceptance that complies with the terms of the offer, mutuality of obligation, and consideration. However, federal procurement is much more heavily regulated, subject to volumes of statutes dealing with Federal contracts and the Federal contracting process, mostly in Titles 10, 31, 40, and 41 of the United States Code.

The engineering design process is a methodical series of steps that engineers use in creating functional products and processes. The process is highly iterative - parts of the process often need to be repeated many times before another can be entered - though the part(s) that get iterated and the number of such cycles in any given project may vary.

…It is a decision making process in which the basic sciences, mathematics, and engineering sciences are applied to convert resources optimally to meet a stated objective. Among the fundamental elements of the design process are the establishment of objectives and criteria, synthesis, analysis, construction, testing and evaluation.

A benefit-cost ratio (BCR) is an indicator, used in cost-benefit analysis, that attempts to summarize the overall value for money of a project or proposal. A BCR is the ratio of the benefits of a project or proposal, expressed in monetary terms, relative to its costs, also expressed in monetary terms. All benefits and costs should be expressed in discounted present values. A BCR can be a profitability index in for-profit contexts. A BCR takes into account the amount of monetary gain realized by performing a project versus the amount it costs to execute the project. The higher the BCR the better the investment. General rule of thumb is that if the benefit is higher than the cost the project is a good investment. 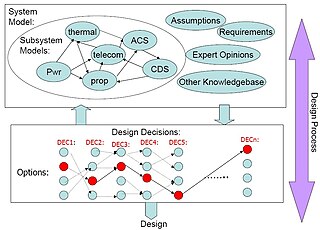 A design rationale is an explicit documentation of the reasons behind decisions made when designing a system or artifact. As initially developed by W.R. Kunz and Horst Rittel, design rationale seeks to provide argumentation-based structure to the political, collaborative process of addressing wicked problems.

Project engineering includes all parts of the design of manufacturing or processing facilities, either new or modifications to and expansions of existing facilities. A "project" consists of a coordinated series of activities or tasks performed by engineers, designers, drafters and others from one or more engineering disciplines or departments. Project tasks consist of such things as performing calculations, writing specifications, preparing bids, reviewing equipment proposals and evaluating or selecting equipment and preparing various lists, such as equipment and materials lists, and creating drawings such as electrical, piping and instrumentation diagrams, physical layouts and other drawings used in design and construction. A small project may be under the direction of a project engineer. Large projects are typically under the direction of a project manager or management team. Some facilities have in house staff to handle small projects, while some major companies have a department that does internal project engineering. Large projects are typically contracted out to engineering companies. Staffing at engineering companies varies according to the work load and duration of employment may only last until an individual's tasks are completed. 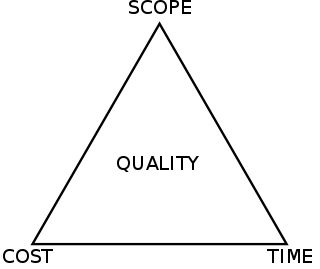 The Project Management Triangle is a model of the constraints of project management. While its origins are unclear, it has been used since at least the 1950s. It contends that:

Association for Standardization of Automation and Measuring Systems or ASAM is an incorporated association under German law. Its members are primarily international car manufacturers, suppliers and engineering service providers from the automotive industry. The association coordinates the development of technical standards, which are developed by working groups composed of experts from its member companies. ASAM pursues the vision that the tools of a development process chain can be freely interconnected and allow a seamless exchange of data. The standards define protocols, data models, file formats and application programming interfaces (APIs) for the use in the development and testing of automotive electronic control units. A large amount of popular tools in the areas of simulation, measurement, calibration and test automation are compliant to ASAM standards. Compliance shall guarantee interoperability of tools from different vendors, allow data exchange without the need for converters, and facilitate the exchange of unambiguous specification between customers and suppliers.