In three-point estimation, three figures are produced initially for every distribution that is required, based on prior experience or best-guesses:

These are then combined to yield either a full probability distribution, for later combination with distributions obtained similarly for other variables, or summary descriptors of the distribution, such as the mean, standard deviation or percentage points of the distribution. The accuracy attributed to the results derived can be no better than the accuracy inherent in the three initial points, and there are clear dangers in using an assumed form for an underlying distribution that itself has little basis.

Based on the assumption that a PERT distribution governs the data, several estimates are possible. These values are used to calculate an E value for the estimate and a standard deviation (SD) as L-estimators, where:

E is a weighted average which takes into account both the most optimistic and most pessimistic estimates provided. SD measures the variability or uncertainty in the estimate. In Project Evaluation and Review Techniques (PERT) the three values are used to fit a PERT distribution for Monte Carlo simulations.

The triangular distribution is also commonly used. It differs from the double-triangular by its simple triangular shape and by the property that the mode does not have to coincide with the median. The mean (expected value) is then:

In some applications, [1] the triangular distribution is used directly as an estimated probability distribution, rather than for the derivation of estimated statistics.

To produce a project estimate the project manager:

The E and SE values are then used to convert the project time estimates to confidence intervals as follows:

These confidence interval estimates assume that the data from all of the tasks combine to be approximately normal (see asymptotic normality). Typically, there would need to be 20–30 tasks for this to be reasonable, and each of the estimates E for the individual tasks would have to be unbiased.

A Z-test is any statistical test for which the distribution of the test statistic under the null hypothesis can be approximated by a normal distribution. Z-test tests the mean of a distribution in which we already know the population variance σ2. Because of the central limit theorem, many test statistics are approximately normally distributed for large samples. For each significance level in the confidence interval, the Z-test has a single critical value which makes it more convenient than the Student's t-test which has separate and different critical values for each sample size. Therefore, many statistical tests can be conveniently performed as approximate Z-tests if the sample size is large or the population variance is known. If the population variance is unknown and the sample size is not large, the Student's t-test may be more appropriate.

In statistics, an effect size is a quantitative measure of the magnitude of a phenomenon. It can refer to the value of a statistic calculated from a sample of data, the value of a parameter of a hypothetical statistical population, or to the equation that operationalizes how statistics or parameters lead to the effect size value. Examples of effect sizes include the correlation between two variables, the regression coefficient in a regression, the mean difference, or the risk of a particular event happening. Effect sizes complement statistical hypothesis testing, and play an important role in power analyses, sample size planning, and in meta-analyses. The cluster of data-analysis methods concerning effect sizes is referred to as estimation statistics. 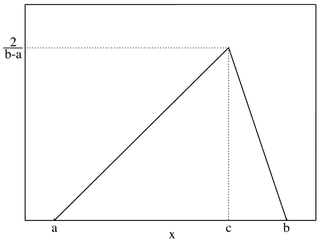 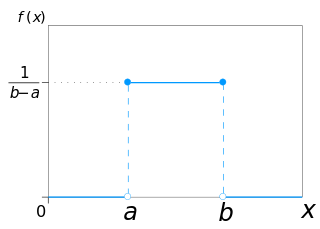 The Datar–Mathews Method is a method for real options valuation. The method provides an easy way to determine the real option value of a project simply by using the average of positive outcomes for the project. The method can be understood as an extension of the net present value (NPV) multi-scenario Monte Carlo model with an adjustment for risk aversion and economic decision-making. The method uses information that arises naturally in a standard discounted cash flow (DCF), or NPV, project financial valuation. It was created in 2000 by Vinay Datar, professor at Seattle University; and Scott H. Mathews, Technical Fellow at The Boeing Company.

In probability and statistics, the PERT distribution is a family of continuous probability distributions defined by the minimum (a), most likely (b) and maximum (c) values that a variable can take. It is a transformation of the four-parameter Beta distribution with an additional assumption that its expected value is