Assistant principals aid the principal in the overall administration of the school. However, Deputy Principals are higher than Assistant Principals as it will be the DP (Deputy Principal)'s responsibility to step in in case of the Principal's: absence, illness, temporary leave or resignation to step forward as Principal. Some assistant principals hold this position for several years to prepare for advancement to principal jobs; others are career assistant principals. They are primarily responsible for scheduling student classes, ordering textbooks and supplies, and coordinating transportation, custodial, cafeteria, and other support services. They usually handle student discipline and attendance problems, social and recreational programs, and health and safety matters. They also may counsel students on personal, educational, or vocational matters. With the advent of site-based management, assistant principals are playing a greater role in ensuring the academic success of students by helping to develop new curricula, evaluating teachers, and dealing with school-community relations—responsibilities previously assumed solely by the principal. The number of assistant principals that a school employs may vary, depending on the number of students. [1]

In American schools, it is often his or her duty to handle matters such as student discipline, parent conference meetings, asset inventory and ordering, school improvement planning, bus and lunch supervision, and teacher observations. Additionally, assistant principals frequently serve as testing coordinators, training staff on procedures related to standardized assessment, as well as accounting for testing materials.[ original research? ] In addition to these duties, assistant principals are instructional leaders.

Most importantly however, in the event that something happens to the principal, such as an extended leave of absence, the assistant principal would act as the interim principal. Because of this, many see this position as a stepping-stone to the larger role of principal and is often used as such. In most schools, the vice principal forgoes all teaching duties in order to address broader educational issues. However, in Canada, during an extended leave of absence of the principal, usually a retired principal will be assigned to a school by the school board/district to oversee the management of the school until the actual principal returns; thus, the roles and responsibilities of the Vice-Principal(s) will remain the same.

In the United Kingdom, most secondary schools have Assistant Principals (or traditionally known as Assistant Headteachers), with the Vice-Principals (or traditionally known as Deputy Headteachers) managing them. Their duties vary from school to school; however, usually Assistant Principals and Vice-Principals support school initiatives in maintaining/overseeing standards, behavior, Key Stages 3–5, teaching and exam timetabling, inclusion, the curriculum and student learning, and overall accountability in the school. They can also carry out performance appraisals and teacher observations. Furthermore, principals/head teachers/headmasters/headmistresses are beginning to have more autonomy on how they will structure their school's senior leadership team and what each member's role will be. These additional roles that are found in English secondary schools can lead to senior leadership/administrative teams to be as large as 8–12 people, depending on the school's size and its demographics (e.g., 1-2 Headteacher(s), 2–4 Deputy Headteachers, 3–8 Assistant Headteachers). In contrast to the US and Canada, most Assistant Headteachers and/or Deputy Headteachers teach 1–2 courses on top of their administrative duties. 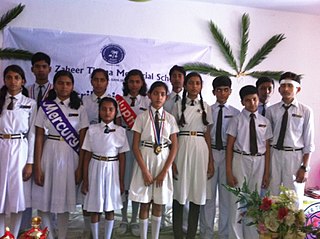 A student council is a curricular or extracurricular activity for students within elementary and secondary schools around the world. These councils exist in most public and private K-12 school systems across the United States, Canada, Greece, Australia and Asia. Student councils often serve to engage students in learning about democracy and leadership, as originally espoused by John Dewey in Democracy and Education (1917).

The Master of Education is a master's degree awarded by universities in many countries. This degree in education often includes the following majors: curriculum and instruction, counseling, school psychology, and administration. It is often conferred for educators advancing in their field. Similar degrees include the Master of Arts in Education and the Master of Science in Education.

A paraprofessional educator, alternatively known as a paraeducator, para-pro, paraswami, instructional assistant, educational assistant, teacher's aide or classroom assistant, is a teaching-related position within a school generally responsible for specialized or concentrated assistance for students in elementary and secondary schools. 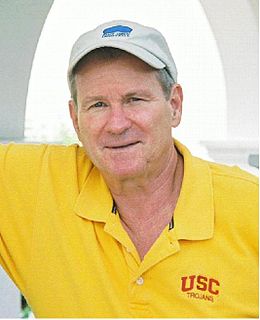 The American Federation of School Administrators is the exclusive national labor union for school administrators, professionals and supervisors advocating for excellence and equity in all of our schools, workplaces and communities.

Gerald L. Zahorchak is an American educator and the former Secretary of Education for the Pennsylvania Department of Education, a position he held from 2006 to 2010. Throughout the 1980s and 1990s, Zahorchak worked at various Pennsylvania public school districts in a number of positions, including teacher, football coach, principal, federal programs director, strategic planning coordinator and personnel director. Zahorchak worked as superintendent of the Greater Johnstown School District in Cambria County from 1997 to 2003, when he was chosen to be Deputy Secretary for Elementary and Secondary Education for the state. Governor Ed Rendell appointed him Secretary of Education in 2005.

The Office of Elementary and Secondary Education is a division of the United States Department of Education. Its purpose is to promote academic excellence, enhance educational opportunities and equity for all of America's children and families, and to improve the quality of teaching and learning by providing leadership, technical assistance, and financial things.

The Department for Education is a state government department delivering school education throughout the state. Education in Australia at school level is managed by each state, though the Commonwealth government makes a significant contribution. The Department was established through the Education Act of 1875 which allowed for the establishment of public schools and contained provisions for compulsory schooling of children aged between 7 and 13. As the state grew quickly into the 20th Century the Education Department expanded across the very large rural areas of the state. Post World War 2, rising birth rates, large scale immigration and increasing demand for secondary education led to very rapid growth in the Department. The number of Private schools grew in this period and with increasing State aid provided growing competition for the State education sector. In the post war period several of large reviews of education have taken place: in particular the Karmel and Keeves reviews. In 2017 there were 514 Schools and approximately 172,000 students within the Department.