Victory and Homeland Thanksgiving Day and the Day of Croatian Defenders (Croatian : Dan pobjede i domovinske zahvalnosti i Dan hrvatskih branitelja) is a public holiday in Croatia that is celebrated annually on 5 August, commemorating the Croatian War of Independence. [1] On that date in 1995 the Croatian Army took the city of Knin during Operation Storm, which effectively brought an end to Republic of Serbian Krajina proto-state. [2] In 2008, the Croatian Parliament also assigned the name Day of Croatian Defenders (Croatian : Dan hrvatskih branitelja) to the holiday, which honors the current service members and veterans of the Armed Forces of Croatia. [3]

The main celebration is centered in Knin where there are festivities commemorating the event, beginning with a mass and laying of wreaths in honour of those who died in the war, and continuing with parades and concerts. The event is attended by thousands, including the country's leading politicians. [4] The Flag of Croatia on Knin Fortress is ceremonially raised as part of the celebrations. [5]

A special military parade of the Armed Forces in honor of Victory Day was held on 4 August 2015 in Zagreb, celebrating the twentieth anniversary of Operation Storm. [6] The parade was opened by the Honor Guard Battalion on the lawns of the National and University Library, with three MiG-21's flying over the city. [7] "Lijepa naša domovino" was performed by the 12-year-old Mia Negovetić, accompanied by the Croatian Armed Forces Band and the Croatian Navy's vocal ensemble. [8] It aroused great public interest considering that the last military parade in Croatia was organized in 1997. About 100,000 spectators attended the parade, additional sound systems were installed at the last minute until the intersection of City of Vukovar and Savska Streets. [9] The editorial board of the Zagreb-based Jutarnji list , gave a positive review of the parade, demanding the introduction of regular parades for Victory Day. [10] Military analyst Igor Tabak praised the event, while criticizing the inauthenticity of certain "historical units". [11]

On the silver jubilee in 2020, the celebrations were attended for the first time ever by an ethnic Serb political representative, Deputy Prime Minister Boris Milošević, a move which was applauded across the political spectrum, with Prime Minister Andrej Plenković among others stating that it will "send a new message for Croatian society". [12] On top of this, Plenković, as well as President Zoran Milanović sent messages of peace to the people of Serbia. [13] [12] Opposition to the move from the Deputy Prime Minister came from members of the political far-right such as the Homeland Movement and the Croatian Defence Forces, as well as from politicians from Serbia and Republika Srpska. 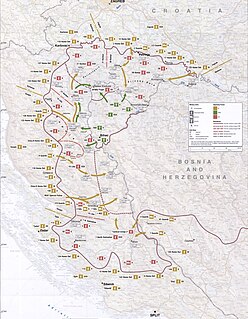 Operation Storm was the last major battle of the Croatian War of Independence and a major factor in the outcome of the Bosnian War. It was a decisive victory for the Croatian Army (HV), which attacked across a 630-kilometre (390 mi) front against the self-declared proto-state Republic of Serbian Krajina (RSK), and a strategic victory for the Army of the Republic of Bosnia and Herzegovina (ARBiH). The HV was supported by the Croatian special police advancing from the Velebit Mountain, and the ARBiH located in the Bihać pocket, in the Army of the Republic of Serbian Krajina's (ARSK) rear. The battle, launched to restore Croatian control of 10,400 square kilometres of territory, representing 18.4% of the territory it claimed, and Bosnian control of Western Bosnia, was the largest European land battle since the Second World War. Operation Storm commenced at dawn on 4 August 1995 and was declared complete on the evening of 7 August, despite significant mopping-up operations against pockets of resistance lasting until 14 August.

Knin is a city in the Šibenik-Knin County of Croatia, located in the Dalmatian hinterland near the source of the river Krka, an important traffic junction on the rail and road routes between Zagreb and Split. Knin rose to prominence twice in history, as the capital of both the medieval Kingdom of Croatia and, briefly, of the unrecognized self-proclaimed Republic of Serbian Krajina for the duration of Croatian War of Independence from 1991 to 1995. 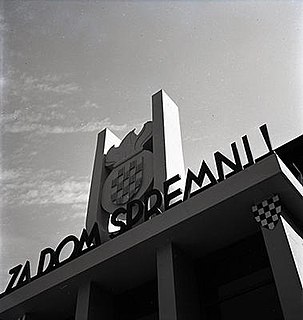 Za dom spremni! was a salute used during World War II by the Croatian Ustaše movement. It was the Ustaše equivalent of the fascist or Nazi salute Sieg heil. 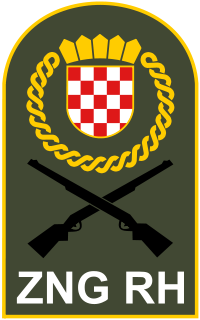 The Croatian National Guard was an armed force established by Croatia in April and May 1991 during the Croatian War of Independence. Although it was established within the framework of the Ministry of the Interior for legal reasons, the ZNG was under the direct command of the Ministry of Defence. It was tasked with the protection of Croatia's borders and territory, and with tasks normally associated with police forces. The ZNG was formed with the transfer of special police units to the ZNG, establishing four all-professional brigades in May 1991, and was presented to the public in a military parade in Zagreb on 28 May. It was commanded by Defence Minister General Martin Špegelj before his resignation in early August. Špegelj was replaced by General Anton Tus, who became the first head of the General Staff of the Armed Forces of the Republic of Croatia.

Croatia–Spain relations refer to the bilateral relationship between Croatia and Spain. Diplomatic relations among two countries were established on March 9, 1992 following Croatia's independence from SFR Yugoslavia. The two nations enjoy largely positive relations. Both countries are full members of the European Union and NATO. 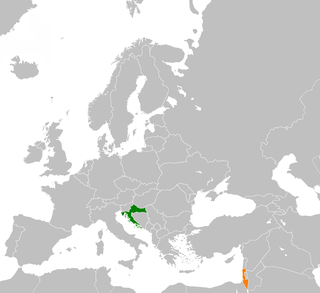 Full diplomatic relations between Croatia and Israel were established on April 9, 1997 following Croatia's independence from SFR Yugoslavia. Croatia has an embassy in Tel Aviv and honorary consulates in Ashdod, Caesarea, Jerusalem and Kfar Shmaryahu. Israel has an embassy in Zagreb. Relations between the two countries are described as friendly and highly cooperative. In recent years, Croatia and Israel intensified bilateral relations and cooperation in the field of defence and security. Croatia is one of the countries Israel occasionally turns to inside the EU to advocate on its behalf and it generally abstains or votes with Israel on key EU votes at the UN. Israeli president Reuven Rivlin described Croatia in 2019 as "Israel's strong ally in the EU, the UN and other multilateral organizations."

Knin Fortress is located near the tallest mountain in Croatia, Dinara, and near the source of the river Krka. It is the second largest fortress in Croatia and most significant defensive stronghold, and a historical town in the Šibenik-Knin County in the Dalmatian Hinterland. The construction of the fortress started as early as 9th century, while the current state was brought up in 17th and 18th centuries. It reached its peak during the reign of Demetrius Zvonimir, King of Croatia from 1076, as it served as a political center of the Croatian Kingdom under him.

Parliamentary elections were held in Croatia on 11 September 2016, with all 151 seats in the Croatian Parliament up for election. The elections were preceded by a successful motion of no confidence against Prime Minister Tihomir Orešković and his cabinet on 16 June 2016, with 125 MPs voting in favour of the proposal. A subsequent attempt by the Patriotic Coalition to form a new parliamentary majority, with Minister of Finance Zdravko Marić as Prime Minister, failed and the Parliament voted to dissolve itself on 20 June 2016. The dissolution took effect on 15 July 2016, which made it possible for President Kolinda Grabar-Kitarović to officially call for elections on 11 September 2016. These were the ninth parliamentary elections since the 1990 multi-party elections.

Lika railway, officially a part of M604 railway, is a 220 km-long single-track, not electrified railroad connecting Zagreb-Rijeka line with Knin railway hub. It mostly runs through Lika region. M604 railway is the only operating railway link between the continental Croatia and Dalmatia, especially its harbors of Split, Zadar, and Šibenik (M607). Lika railway, finished in 1925, is a key part of this link. The M604 line itself runs from Oštarije/Ogulin on Zagreb-Rijeka railway past Knin, to Split terminus. Its total length is 320 km. Historically, much older Knin-Split section of M604 line used to be known as Dalmatian railway. 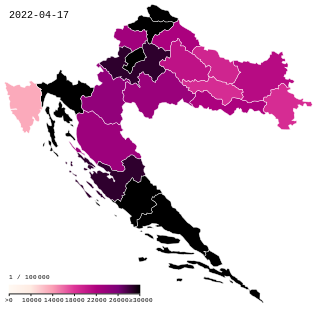 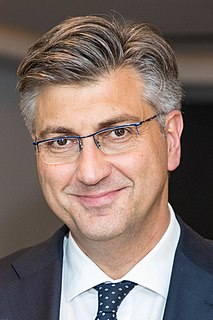 The Fifteenth Government of the Republic of Croatia is the current Croatian Government cabinet formed on 23 July 2020, following the 2020 election. It is led by Prime Minister Andrej Plenković.

Boris Milošević is a Croatian lawyer and politician who served as Deputy Prime Minister of Croatia between 2020 and 2022. He is a member of the Independent Democratic Serb Party (SDSS). He previously served as the president of the Serb National Council from July 2019 until July 2020. 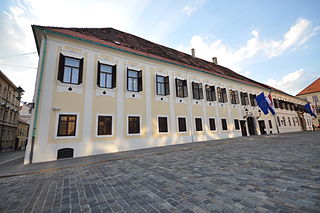 The 2020 Zagreb shooting, commonly referred to as the St. Mark's Square attack, occurred on 12 October 2020 in Zagreb, Croatia, when 22-year-old Danijel Bezuk approached Banski dvori, which houses the office of the Prime Minister and serves as the meeting place of the government, on St. Mark's Square and started shooting at it with an assault rifle, wounding a police officer in the process. In the aftermath, the perpetrator ran off to a nearby neighborhood and committed suicide.

The Croatian Sovereignists are a conservative and Christian right-wing political party in Croatia. The party was founded in 2019 and is led by Marijan Pavliček.

On 10 March 2022 at 23:01 CET, an unidentified Soviet-made Tupolev Tu-141 reconnaissance unmanned aerial vehicle (UAV) crashed in Zagreb, the capital of Croatia. With an unidentified operator and unknown destination, the origin of the drone is presumed to be connected to military actions during the Russian invasion of Ukraine.