Schooldigger.com ranked the school 153rd out of 381 public high schools statewide in its 2011 rankings (a decrease of 12 positions from the 2010 ranking) which were based on the combined percentage of students classified as proficient or above on the mathematics (84.2%) and language arts literacy (92.7%) components of the High School Proficiency Assessment. [8]

The Wall High School Crimson Knights [2] compete in Division B North of the Shore Conference, an athletic conference comprised of public and private high schools in Monmouth and Ocean counties along the Jersey Shore. [3] [10] The conference under the jurisdiction of the New Jersey State Interscholastic Athletic Association (NJSIAA). [11] With 790 students in grades 10-12, the school was classified by the NJSIAA for the 2019–20 school year as Group III for most athletic competition purposes, which included schools with an enrollment of 761 to 1,058 students in that grade range. [12] The school was classified by the NJSIAA as Group III South for football for 2018–2020. [13]

Wall High School is known for its sports rivalry with Manasquan High School in Manasquan, with the two schools playing each other in front of crowds of 5,000 at their annual Thanksgiving Day American football game. [14] The football rivalry with Manasquan dates back to 2001 and was listed at 10th on NJ.com's 2017 list "Ranking the 31 fiercest rivalries in N.J. HS football". Wall leads the series with an overall record of 8-7 through the 2017 season. [15]

The school was the Group III winner of the 2019-20 Shop Rite Cup, which recognizes athletic achievement across all interscholastic sports. [16]

The boys soccer team won the Group III state championship in 1978 (defeating Ramapo High School in the playoff finals), 1979 (vs. Dwight Morrow High School), 1980 (vs. James Caldwell High School), 1981 (vs. Randolph High School) and 2004 (vs. Scotch Plains-Fanwood High School). Between 1978 and 1981, the team won four consecutive state titles, which is tied for the third-longest streak in the state. [17] From 1977 to 1983 the program had an overall record stood at 130-13-5 and had overall state rankings during their 1978-1981 championship streak of #2, #3, #1 and #1 (among 300 eligible schools). During those years, they won five straight Central Jersey Group III state sectional championships and had an NJSIAA state playoff record of 24 wins out of 25 games over a five-year span. The teams won five Wall Fall Festival Classics over this period as well and captured six straight Monmouth County Titles as well as winning the first ever Monmouth-Ocean County Championship. The 1978 team finished the season with a record of 23-2-1, including 13 shutouts, and capped off the year by winning the team's first state championship with a 4-1 win against Ramapo in the Group III finals. [18] In 1979, the team won its second consecutive Group III championship with a 2-1 win against Dwight Morrow, to finish the season with a record of 21-4-1. [18] The 1980 team ended the season with an 18-game unbeaten streak, capped off by a 3-2 championship-game win at Mercer County Park against James Caldwell in the Group III finals that gave the team its third straight title and a record of 23-1-1 for the year. [19] With George Gelnovatch leading the team with 20 goals, the 1981 team finished the season with a 23-1-1 record after a 4-1 win against Randolph in the Group III championship game, the program's fourth consecutive state title. [18] The 1992 team won the Central Jersey Group III championship and in 1993 a Central Jersey Group II sectional title was added to the overall record. The 2004 team won the Group III state championship, the program's fifth state title and the first since it won four in a row from 1978 to 1981, with a 4-1 win over Scotch Plains-Fanwood High School in a game played at The College of New Jersey, to finish the season with a record of 19-3-3. [17] [18] [20] [21] The Wall High School soccer program was founded by Harry Baldwin, a member of the U.S. National Soccer Hall of Fame, and has produced nearly 50 All-State players. Wall High School's first soccer captain and Soccer America Professional Coach of the Year, Gary Hindley, played here. These teams had two coaches, Tom Farley and Jim Carhart, who together have coached for nearly 50 years and combined have won nearly 700 games. Farley won the National Coach of the Year title in 1979. Carhart has won regional and state coaching honors several[ quantify ] times. Top soccer players at Wall include Tom Kain, America's top player at Duke and Walls's only Olympian, and George Gelnovatch, runner-up as the US's top player as well as All American. In 2009, displays were erected and a Hall of Fame established honoring the overall success of WHS soccer teams.

The Wall lacrosse team had its first season in 2006 and won the Shore Conference division championships in both 2008 and 2011.

The ice hockey team made its first appearance in the New Jersey Public B state championship in 2017, losing to Glen Rock High School by a score of 9-1 in the tournament final. [44]

In 2015, former district superintendent James Habel was sentenced to five years in prison, forfeiture of his pension and the loss of his ability to work in a public sector job in the state, after his conviction on charges of official misconduct. Habel earned nearly $300,000 a year in salary and benefits, but took more than 100 vacation days that he didn't report so that he could cash out an extra $85,000 for the unused vacation time. The judge rejected Habel's attorney's requests for leniency, saying that Habel's actions were a prime example of "greed". [45]

The school found itself in the middle of a national controversy when high school yearbooks were distributed to students at the end of the 2016-17 school year. In two instances, students wearing political campaign apparel bearing the name Trump had the logos airbrushed out of their student photos. A third student included a Trump quote in her yearbook profile, which was also omitted from final publication. Students noted that political apparel for other politicians (Reagan-Bush and Barack Obama) were included in the current and past yearbooks. The school district suspended the teacher who oversaw the yearbook, pending a formal investigation. [46] [47] 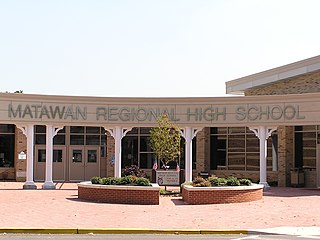 Matawan Regional High School is a four-year regional public high school located in Aberdeen Township, New Jersey, United States, serving students in ninth through twelfth grades as the lone secondary school of the Matawan-Aberdeen Regional School District. Serving students from Aberdeen Township and Matawan, it is one of Monmouth County's largest schools. The school has been accredited by the Middle States Association of Colleges and Schools since 1951. The school mascot is a husky.

Raritan High School is a four-year comprehensive public high school serving students in ninth through twelfth grades from Hazlet Township in Monmouth County, New Jersey, United States, operating as the lone secondary school of the Hazlet Township Public Schools. The school was named after the former community name, Raritan Township, and opened in September 1962 with an enrollment of 778 students, increasing to over 2,300 students by 1979.

Jackson Memorial High School is a four-year comprehensive public high school serving students in ninth through twelfth grades in Jackson Township, in Ocean County, New Jersey, United States, opened in 1964 as part of the Jackson School District. It is the sister high school of Jackson Liberty High School, which opened in late summer 2006.

Brick Memorial High School is a four-year comprehensive public high school serving students in ninth through twelfth grades in Brick Township in Ocean County, New Jersey, United States, operating as a part of the Brick Public Schools. The school opened in 1980 as the second of two secondary schools in the district, the other being Brick Township High School.

Red Bank Catholic High School is a four-year private coeducational Roman Catholic high school, located in Red Bank in Monmouth County, New Jersey, United States, serving students in ninth through twelfth grades, operating under the supervision of the Roman Catholic Diocese of Trenton. The school has been accredited by Cognia since 2013.

Brick Township High School is a four-year public high school serving students in ninth through twelfth grades in Brick Township in Ocean County, New Jersey, operating as part of the Brick Public Schools. The school is one of two secondary schools in the district, the other being Brick Memorial High School.

Point Pleasant Beach High School is a four-year, comprehensive community public high school that serves students in ninth through twelfth grades from Point Pleasant Beach in Ocean County, New Jersey, United States, operating as the lone secondary school of the Point Pleasant Beach School District. The school has been accredited by the Middle States Association of Colleges and Schools Commission on Elementary and Secondary Schools since 1939.

Middletown High School South is a four-year comprehensive public high school located in Middletown Township, Monmouth County, New Jersey, United States, serving students in ninth through twelfth grades as one of the two secondary schools of the Middletown Township Public School District. The other school in the district is Middletown High School North. The school has been accredited by the Middle States Association of Colleges and Schools Commission on Elementary and Secondary Schools since 1977.

Point Pleasant Borough High School is a four-year comprehensive community public high school located on Laura Herbert Drive in Point Pleasant in Ocean County, New Jersey, United States. The school serves students in ninth through twelfth grades, operating as the lone secondary school of the Point Pleasant School District. The mascot is the panther, and the school colors are black and gold.

Long Branch High School is a comprehensive, four-year community public high school that serves students in ninth through twelfth grades in the city of Long Branch, in Monmouth County, New Jersey, United States, operating as part of the Long Branch Public Schools. LBPS, one of 31 special-needs Abbott districts in the state, serves the city of Long Branch. The school has been accredited by the Middle States Association of Colleges and Schools Commissions on Elementary and Secondary Schools since 1928. 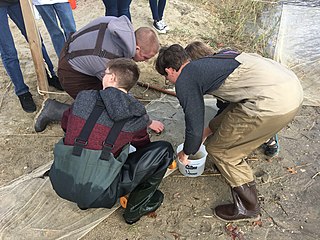 St. Rose High School is a co-educational four-year Catholic high school in Belmar, in Monmouth County, New Jersey, United States. The school operates under the auspices of the Roman Catholic Diocese of Trenton. The school was founded in 1923 by the Parish of St. Rose and the Sisters of St. Joseph.