Brentwood Bay is a small village in the municipality of Central Saanich, on the Saanich Peninsula in British Columbia, Canada. It lies north of the city of Victoria, east of the community of Willis Point, and south of the town of Sidney.

Claud Elliott Provincial Park is a provincial park in British Columbia, Canada located on northern Vancouver Island approximately 50 kilometres (31 mi) southeast of Port McNeill, between the Tsitsika River and Bonanza Lake, near the community of Woss.

Telegraph Cove is a community of about 20 inhabitants, on Vancouver Island in British Columbia, Canada, located approximately 210 kilometres (130 mi) northwest of Campbell River. It is a former fishing and cannery village that has become a launch point for eco-tourism. It shares the inlet with Beaver Cove which is 3 km (2 mi) up the inlet.

King Island is an island on the Coast of the Canadian province of British Columbia. It is located south of Dean Channel and about 20 kilometres (12 mi) east of Bella Bella. A number of other islands separate King Island from the open sea of Queen Charlotte Sound.

Passage Island is a small island near West Vancouver, British Columbia, and across from Bowen Island in Canada. The island is mostly woodland and cliffs. It marks the entrance to Howe Sound, and the ferry between Horseshoe Bay to Nanaimo regularly passes it. The island borrows a postal code, V7W 1V7, from the wealthiest community in Canada, West Vancouver. However, Passage Island is actually overseen by the Islands Trust and is part of the Metro Vancouver Regional District. It is isolated from West Vancouver by approximately two km (1.2 mi) of ocean.

Robson Bight is a small Vancouver Island bay at the west end of Johnstone Strait across from West Cracroft Island in British Columbia, Canada that includes a protected killer whale habitat famous for its whale-rubbing beaches. The bight is adjacent to Lower Tsitika River Provincial Park. The nearest access point is Telegraph Cove on the east coast of Northern Vancouver Island.

Haddington Island is a small volcanic island in the Canadian province of British Columbia, located south of Malcolm Island and Broughton Strait. It is located in the Mount Waddington Regional District.

Hopetown is an Indian Reserve community of the Gwawa'enux group of Kwakwaka'wakw peoples, located on the south side of Watson Island, to the north of Broughton Island in the Broughton Archipelago on the north side of the Queen Charlotte Strait region on the Central Coast of British Columbia, Canada. The community is located entirely within Hopetown Indian Reserve No. 10A. The traditional name of the village in the Kwak'wala language is Hikums, which has also been spelled Hegams and Hakina and Hegams, meaning "facing outwards".

Shearwater is a community in coastal British Columbia. It is located three miles from Old Bella Bella on Denny Island. It is in the territory of the Heiltsuk Nation.

Heriot Bay is the principal settlement on Quadra Island in British Columbia, Canada.

Yeo Island is an island in the North Coast region of British Columbia, Canada. It is separated from the Don Peninsula to its west by Spiller Channel, and from the Coldwell Peninsula to its east by Bullock Channel. It was first charted and circumnavigated in 1793 by James Johnstone, one of George Vancouver's lieutenants during his 1791-95 expedition.

Burke Channel is a channel in the Central Coast region of the Canadian province of British Columbia, separating the south and east coasts of King Island from the mainland. It was first charted in 1792 by James Johnstone, one of George Vancouver's officers during his 1791-1795 expedition. Vancouver named it "Burke's Channel" after Edmund Burke.

Fisher Channel is a channel in the Central Coast region of the Canadian province of British Columbia. To its west are Hunter and Denny Islands, to its east King Island. It was first charted in 1793 by George Vancouver during his 1791-95 expedition. He named it "Fisher’s Channel" after "a much-respected friend" Reverend John Fisher.

Hanson Island is an island in the Queen Charlotte Strait region of the Central Coast of British Columbia, located west of Harbledown Island and south of the Plumper Islands. The westernmost part of Johnstone Strait is to the south of the island, Blackfish Sound to the north, beyond which is Swanson Island. The island is named for James Hanson who served aboard HMS Chatham in 1792 and was later transferred that year to command Vancouver's supply ship HMS Daedalus. 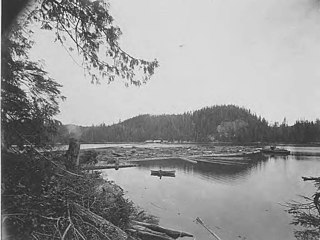 Broughton Island is an island in the Broughton Archipelago of the Queen Charlotte Strait area of the Central Coast of British Columbia, located northwest of Gilford Island. 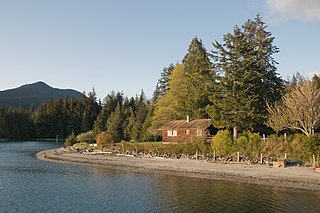 Port Neville is a bay, port and locality on the north side of Johnstone Strait, south of Call Inlet, in the Central Coast region of British Columbia, Canada.

East Cracroft Island is an island in the Johnstone Strait region of the Central Coast region of British Columbia, Canada. It is the smaller of the two Cracroft Islands, and at low tide is really one island with its larger neighbour, West Cracroft Island. On the south side of the shallows that form an isthmus between them at low tide is Port Harvey, which is a short, wide inlet or bay. On its east shore is Keecekiltum Indian Reserve No. 2, 11.7 ha., which is under the governance of the Tlowitsis Nation of the Kwakwaka'wakw peoples. at 50°33′00″N126°16′00″W.

Port Harvey is a port on the south side of the Cracroft Islands in the Johnstone Strait region of the Central Coast region of British Columbia, Canada, forming a small bay or inlet south of the shallows that link West Cracroft and East Cracroft Islands. On its east shore is Keecekiltum Indian Reserve No. 2, 11.7 ha., which is under the governance of the Tlowitsis Nation of the Kwakwaka'wakw peoples. at 50°33′00″N126°16′00″W. It was named by Captain Richards for Captain Harvey of HMS Havannah.

Stuart Channel is a strait in the Gulf Islands region of the Gulf of Georgia, separating Vancouver Island on the west from Thetis, DeCourcy and Penelakut (Kuper) Islands on the east. Ladysmith Harbour and the town of Chemainus face onto it from Vancouver Island. It is crossed by a BC Ferries route serving Thetis and Penelakut Islands.