The Zwickau Prophets (German : Zwickauer Propheten; also Zwickauer Storchianer) were three men of the Radical Reformation from Zwickau in the Electorate of Saxony in the Holy Roman Empire, who were possibly involved in a disturbance in nearby Wittenberg and its evolving Reformation in early 1522.

The relationship of the Zwickau Prophets to the Anabaptist movement has been variously interpreted. They have been viewed as a precursory foundation of Anabaptism before the rise of the Swiss Brethren in 1525, as unrelated to the movement except for the influence on Thomas Müntzer and as being a dual foundation with the Swiss Brethren to form a composite movement of Anabaptism. [5] Regardless of the exact relationship to Anabaptism, the Zwickau Prophets presented a radical alternative to Luther and mainstream Protestantism as demonstrated in their involvement in disturbances in Wittenberg.

Perhaps the most distinctive feature of the Zwickau Prophets was their spiritualism, which was that direct revelations from the Holy Spirit, not Scripture, were their authority in theological matters. [6] Another highly distinctive feature was their opposition to pedobaptism [7] (infant baptism). Despite their rejection of pedobaptism, the Zwickau Prophets do not seem to have departed from theory to have taken the turn, which would mark Anabaptism, to practicing adult baptism of believers. [8]

The Zwickau Prophets also held to imminent apocalypticism, [9] which led them to believe that the end of days would come soon. They also possibly sought a Believers' Church, [10] which would be separate from the State churches of Protestantism and Catholicism.

The trio, having been exiled from Zwickau, arrived in Wittenberg on December 27, 1521. [2] The men and their ideas had gained favor among Andreas Karlstadt and others who sought greater reforms in the city. [4] Despite their acceptance among some, the Prophets' presence may have caused an unrest in the city that Philipp Melanchthon was unable to settle. [2] Melanchthon turned to Martin Luther, who was at that time being held in protective custody at the Wartburg Castle, and at the behest of the Wittenberg town council, Luther returned to his reforming activities in Wittenberg on March 6, 1522. [11]

Luther soon preached eight sermons against those he would label Schwärmer ("Fanatics") and the force of these sermons was enough to calm the growing radicalism in the city. [12] The Prophets then reportedly confronted Luther in order to assert the authority of the Spirit-mediated message over Luther and his gospel. Luther claimed to have demanded that they authenticate their message with a miracle, a sign which the men refused to give. The Prophets then denounced Luther and left Wittenberg. [13]

Thomas Müntzer held two posts as preacher in Zwickau in 1520/21 and had contact with the Zwickau Prophets. While Müntzer may have associated himself for a time with them and held similar views to them in several areas of doctrine, this is not the same as Müntzer being a part of their group. As Vedder explained it, Müntzer was "with" the Prophets, but not "of" them. [3] Some historians, however, have asserted that instead of the Zwickau Prophets and Müntzer being parallel with a mutual influence, Müntzer used the Prophets for his revolutionary ends. [14] [15]

While the above narrative of the events of Wittenberg in early 1522 and the association of the Zwickau Prophets with them had become the standard textbook explanation of the case, Olaf Kuhr has proposed a new paradigm for understanding the occasion. [16] Referencing primary sources such as correspondences, Kuhr concludes that Dreschel and Storch left Wittenberg before January 1 and Stübner by January 6. [17] With the former pair in Wittenberg for no more than four days and the latter for no more than ten, Kuhr questioned how great of an impact the Prophets could have had and if they were the source of the Wittenberg disturbances. Their absence would explain Qualben's observation (noting that is named by Kuhr as holding to the older historiography) that Luther made no personal references to the Prophets in the eight sermons preached upon his return. [18]

Kuhr also challenged the older paradigm on the confrontation that the Prophets had with Luther. Kuhr concluded that the Prophets did not come to Luther as a group but had each approached Luther at various times in the following year during separate visits to Wittenberg. [19] Luther's account of the encounters, though appearing singular may have been a conflation of separate meetings, each meeting being similar enough for Luther to describe as one.

Anabaptism is a Christian movement which traces its origins to the Radical Reformation. The movement is seen by outsiders as another offshoot of Protestantism, although this view is not shared by Anabaptists, who view themselves as a separate branch of Christianity. 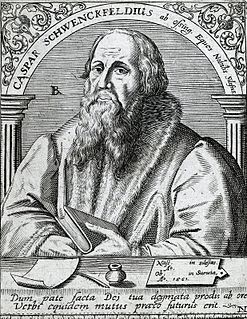 CasparSchwen(c)kfeld von Ossig was a German theologian, writer, physician, naturalist, and preacher who became a Protestant Reformer and spiritualist. He was one of the earliest promoters of the Protestant Reformation in Silesia. 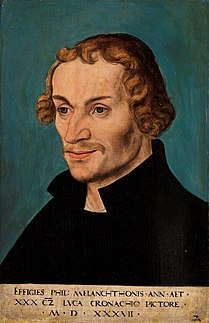 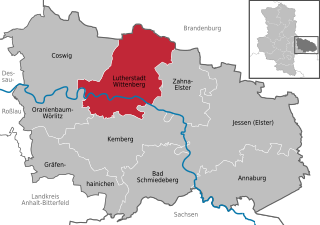 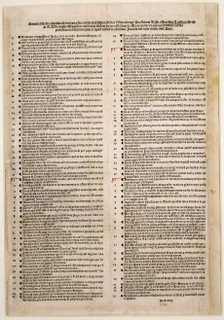 The Ninety-five Theses or Disputation on the Power and Efficacy of Indulgences is a list of propositions for an academic disputation written in 1517 by Martin Luther, professor of moral theology at the University of Wittenberg, Germany. They advance Luther's positions against what he saw as the abuse of the practice of clergy selling plenary indulgences, which were certificates believed to reduce the temporal punishment in purgatory for sins committed by the purchasers or their loved ones. In the Theses, Luther claimed that the repentance required by Christ in order for sins to be forgiven involves inner spiritual repentance rather than merely external sacramental confession. He argued that indulgences led Christians to avoid true repentance and sorrow for sin, believing that they could forgo it by purchasing an indulgence. These indulgences, according to Luther, discouraged Christians from giving to the poor and performing other acts of mercy, believing that indulgence certificates were more spiritually valuable. Though Luther claimed that his positions on indulgences accorded with those of the Pope, the Theses challenge a 14th-century papal bull stating that the pope could use the treasury of merit and the good deeds of past saints to forgive temporal punishment for sins. The Theses are framed as propositions to be argued in debate rather than necessarily representing Luther's opinions, but Luther later clarified his views in the Explanations of the Disputation Concerning the Value of Indulgences.

Thomas Müntzer was a German preacher and radical theologian of the early Reformation whose opposition to both Martin Luther and the Roman Catholic Church led to his open defiance of late-feudal authority in central Germany. Müntzer was foremost amongst those reformers who took issue with Luther's compromises with feudal authority. He became a leader of the German peasant and plebeian uprising of 1525 commonly known as the German Peasants' War. He was captured after the Battle of Frankenhausen, tortured and executed.

Conrad Grebel, son of a prominent Swiss merchant and councilman, was a co-founder of the Swiss Brethren movement. 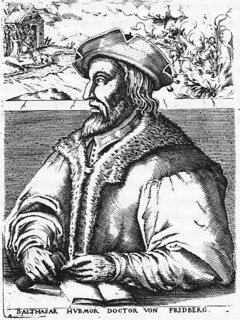 Balthasar Hubmaier was an influential German Anabaptist leader. He was one of the most well-known and respected Anabaptist theologians of the Reformation.

Melchior Hoffman was an Anabaptist prophet and a visionary leader in northern Germany and the Netherlands. 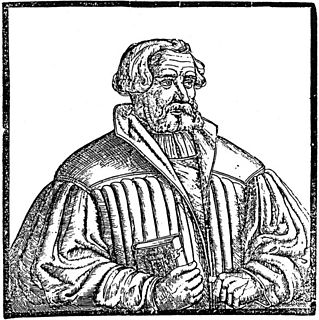 Andreas Rudolph Bodenstein von Karlstadt, better known as Andreas Karlstadt or Andreas Carlstadt or Karolostadt, or simply as Andreas Bodenstein, was a German Protestant theologian, University of Wittenberg chancellor, a contemporary of Martin Luther and a reformer of the early Reformation.

Nikolaus Storch was a weaver and radical lay-preacher in the Saxon town of Zwickau. He and his followers, known as the Zwickau Prophets played a brief role during the early German Reformation years in south-east Saxony, and there is a view that he was a forerunner of the Anabaptists. In the years 1520-1521, he worked closely with the radical theologian Thomas Müntzer.

The Radical Reformation represented a response to corruption both in the Catholic Church and in the expanding Magisterial Protestant movement led by Martin Luther and many others. Beginning in Germany and Switzerland in the 16th century, the Radical Reformation gave birth to many radical Protestant groups throughout Europe. The term covers radical reformers like Thomas Müntzer and Andreas Karlstadt, the Zwickau prophets, and Anabaptist groups like the Hutterites and the Mennonites.

The Peasant War in Germany by Friedrich Engels is a short account of the early-16th-century uprisings known as the German Peasants' War (1524–1525). It was written by Engels in London during the summer of 1850, following the revolutionary uprisings of 1848–1849, to which it frequently refers in a comparative fashion. "Three centuries have flown by since then," he writes, "and many a thing has changed; still the peasant war is not as far removed from our present-day struggles as it would seem, and the opponents we have to encounter remain essentially the same."

James M. Stayer is a historian specializing in the German Reformation, particularly the anabaptist movement. He is also a Professor Emeritus at Queen's University in Kingston, Ontario, Canada. Born in Lancaster County, Pennsylvania, Stayer received his PhD from Cornell University in 1964. After teaching at Ithaca College, Bridgewater College and Bucknell University, he moved to Canada in 1968 to teach at Queen's University. He became a Canadian citizen in 1977.

Wilhelm Reublin was a leading figure of the Swiss Brethren movement. Reublin was born in 1484 in Rottenburg am Neckar. In 1521, after studying theology in Freiburg and Tübingen, Reublin became the pastor at St. Alban in Basel and began to advocate reform. St. Alban was soon the center of the evangelical movement in Basel. In the Fall of 1522 Reublin was expelled from the city for his Reformation sermons and moved to Witikon in 1524, where he became the local pastor and preached against infant baptism. Reublin was with Conrad Grebel and Felix Manz in Zürich in January 1525 at the birth of the Anabaptist movement. Reublin took part in a disputation on 17 January 1525 after which Grebel, Mantz and Reublin were given eight days to leave the canton. 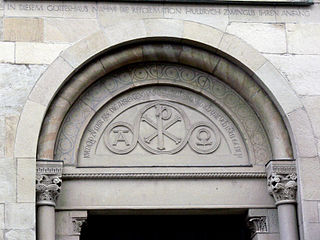 The Affair of the Sausages (1522) was the event that sparked the Reformation in Zürich. Huldrych Zwingli, pastor of Grossmünster in Zurich, Switzerland, spearheaded the event by publicly speaking in favor of eating sausage during the Lenten fast. Zwingli defended this action in a sermon called Von Erkiesen und Freiheit der Speisen, in which he argued, from the basis of Martin Luther's doctrine of sola scriptura, that "Christians are free to fast or not to fast because the Bible does not prohibit the eating of meat during Lent."

Johannes Sylvius Egranus was a German theologian, humanist, reformer and a friend of Martin Luther.

Christian Döring was a 16th-century figure of the Reformation, a wealthy goldsmith and one of the first publishers of the Bible in native German.