The 2010 Scottish Cup Final was the 125th final of the Scotland's most prestigious football knockout competition, the Scottish Cup. The match took place on 15 May 2010, [1] at Hampden Park, Glasgow and was contested by first time finalists Ross County and 1994 winners Dundee United. Craig Conway scored a brace as Dundee United ended a wait of 16 years to win the Scottish Cup for the second time in the club's history. [2] The match was the first final since 1938 in which both teams came from outwith the Central Belt. [3]

Dundee United had previously reached the Scottish Cup Final eight times, winning only one of them, while Ross County were making their first ever Scottish Cup final. Ross County join the list of lower division sides who have reached the final in the last five years, Gretna in 2006 and Queen of the South in 2008. Dundee United and Ross County had played each other only four times before, with United winning the last three. All of their encounters had been in the League Cup, Ross County won the first game at Victoria Park on 19 August 1998, 2–0 after extra time, their next encounter came almost exactly a year later on 18 August 1999 at Tannadice Park when United won 3–1. Eight years after their last encounter they met again at Tannadice where United got a 2–1 win. They then played each other earlier in the 2009-2010 season with United winning 2–0 at Victoria Park.

Ross County entered in the third round, playing their first match against Third Division side Berwick Rangers. In rounds four and five, Ross County scored a total of thirteen goals, first against non-league Inverurie Loco Works, then facing Second Division side Stirling Albion. Their quarter-final match was their first against an SPL side, and they took Hibernian to a replay, which they won with a goal in the 90th minute. In their semi-final at Hampden, they faced Celtic and defeated them 2–0, booking their first appearance in the final of the Scottish Cup.

As a member of the SPL, Dundee United did not enter till the fourth round. Their fourth-round game was against First Division side Partick Thistle and fifth-round game was against SPL side St. Johnstone. In the quarter-final, United took the defending champions Rangers to a replay at Tannadice in which they won 1–0. In the semi-final they faced another First Division team in Raith Rovers, who they beat 2–0.

Dundee United sold more than 20,000 tickets for the match up to the end of April and have asked the Scottish Football Association for another 5,000 tickets. Ross County president Roy McGregor expects 20,000 supporters to attend the final, after they sold the initial allocation of 11,000 tickets in just three days. Another batch of 5,000 was received from the SFA and all expect to sell out. [4]

Dundee United manager Peter Houston let former captain Lee Wilkie lead the team out for final. The defender was forced to retire at the age of 29 earlier in the season after being plagued by knee problems. [9]

On 5 May 2010, Ross County announced that they had abandoned plans for a training camp in Spain because of the latest volcanic ash cloud. They were due to fly from Glasgow but, with airport closures and the expected traveller backlog, the club decided to stay in Scotland and prepare for the final. [10]

Dundee United dominated the match, but for an hour were unable to make a breakthrough, with interventions from Ross County defender Alex Keddie twice rescuing his side when United had goal scoring opportunities in the first half. [3] [11] United finally scored on 61 minutes when David Goodwillie picked up a clearance from County's Goalkeeper Michael McGovern and lobbed the ball over him and into the goal from 25 yards out. [3] [11] Craig Conway then scored twice in the final quarter of the match to ensure United's second Scottish Cup win. [3] [11] Dundee United Football Club is a Scottish professional football club based in the city of Dundee. Formed in 1909, originally as Dundee Hibernian, the club changed to the present name in 1923. United are nicknamed The Terrors or The Tangerines and the supporters are known as Arabs. 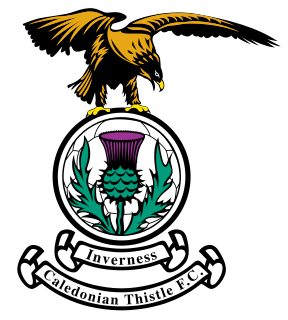 Craig Ian Conway is a Scottish professional footballer who plays as a winger for Scottish Premiership club St Johnstone. He made seven full international appearances for the Scottish national team between 2009 and 2013.

The 2004–05 season was the 96th year of football played by Dundee United, and covers the period from 1 July 2004 to 30 June 2005. United finished in ninth place which meant the previous season's top-six finish was the only one in the five seasons since the split was introduced.

The 2006–07 season was the 97th year of football played by Dundee United, and covers the period from 1 July 2006 to 30 June 2007. United finished in ninth place for the third season in the row and meant they had only finished in the top six once in the seven seasons since the split was introduced.

Steven Milne is a Scottish former professional footballer who played as a striker for Dundee, Forfar Athletic, Plymouth Argyle, St. Johnstone, Ross County and Arbroath. Milne received a runners-up medal in the 2003 Scottish Cup Final, where Dundee lost 1–0 to Rangers. He won the Scottish Challenge Cup in 2007 and the Scottish First Division in 2009 with St. Johnstone.

Lee Wilkie is a Scottish former footballer, who played as a central defender. Wilkie spent the majority of his career in Dundee, playing for both Dundee and Dundee United. Wilkie started his career with Dundee, making over 100 appearances in the Scottish Premier League. He won 11 Scotland international caps between 2002 and 2003, during the tenure of Berti Vogts. Soon after this he suffered from a series of knee injuries, which led to Wilkie being released by Dundee in August 2006. Wilkie then signed for Dundee United and he again played regularly for a while, but ongoing knee problems forced his retirement from professional football in April 2010.

The 2008 Scottish League Cup Final was played on 16 March 2008 at Hampden Park in Glasgow and was the 61st Scottish League Cup Final. The final was contested by Dundee United, who beat Aberdeen 4–1 in the semi-final, and Rangers, who beat Hearts 2–0. The two sides had last met in a League Cup Final in the 1984–85 season with Rangers winning 1–0 on that occasion. The previous year's winners were Hibernian, who beat Kilmarnock 5–1 in the 2007 Final but they were knocked out in the third round by Motherwell who beat them 4–2, it was the fifth successive year in which both of the previous year's finalists did not make it to the final. Rangers won the match 3–2 on penalties after the match had ended in a 2–2 draw after extra time. 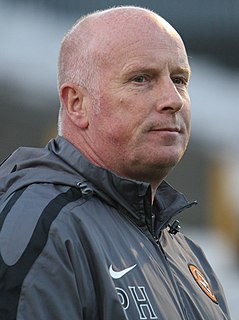 The 2009 Scottish Cup Final was the final of the 124th season of the main domestic football cup competition in Scotland, the Scottish Cup. The final was played at Hampden Park in Glasgow on 30 May 2009. The match was contested by Rangers, who were defending the trophy having won the 2008 final, and Falkirk who last won the Cup in 1957.

Lewis Toshney is a Scottish footballer who plays as a defender for Inverness Caledonian Thistle. Toshney has also previously played for Celtic, Ross County, Cowdenbeath, Raith Rovers, Kilmarnock, Brechin City, Dundee United, Dundee and Falkirk. He represented Scotland at youth international levels up to and including the Scotland under-21 team. 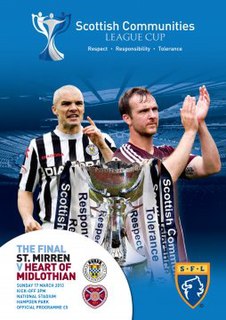 The 2013–14 season is the club's 105th season, having been founded as Dundee Hibernian in 1909 and their first season in the Scottish Premiership. United will also compete in the League Cup and the Scottish Cup.

The 2014 Scottish Cup Final was the 129th final of the Scottish Cup, the most prestigious knockout football competition in Scotland. The match took place at Celtic Park on 17 May 2014 and was contested by St Johnstone and Dundee United.