Last updated March 03, 2021
Not to be confused with Scottish Football Union.

The Scottish Football Association (also known as the SFA and the Scottish FA; Scots : Scots Fitba Association; Scottish Gaelic: Comann Ball-coise na h-Alba) is the governing body of football in Scotland and has the ultimate responsibility for the control and development of football in Scotland. Members of the SFA include clubs in Scotland, affiliated national associations as well as local associations. It was formed in 1873, making it the second oldest national football association in the world. It is not to be confused with the Scottish Football Union, which is the name that the SRU was known by until the 1920s.

The Scottish Football Association is responsible for the operation of the Scotland national football team, the annual Scottish Cup and several other duties important to the functioning of the game in Scotland.

Following the formation of Scotland's earliest football clubs in the 1860s, football experienced a rapid growth but there was no formal structure, and matches were often arranged in a haphazard and irregular fashion.

Queen's Park, a Glasgow club founded in 1867, took the lead, and following an advertisement in a Glasgow newspaper in 1873, representatives from seven clubs – Queen's Park, Clydesdale, Vale of Leven, Dumbreck, Third Lanark, Eastern and Granville – attended a meeting on 13 March 1873. Furthermore, Kilmarnock sent a letter stating their willingness to join.

That day, these eight clubs formed the Scottish Football Association, and resolved that:

The clubs here represented form themselves into an association for the promotion of football according to the rules of The Football Association and that the clubs connected with this association subscribe for a challenge cup to be played for annually, the committee to propose the laws of the competition. [3]

The chief executive of the Scottish Football Association oversees the development of football in Scotland and the administration of disciplinary matters, and is also responsible for the general organisation of the national side. One of the most prominent roles of the chief executive is to hire and dismiss Scotland national football team managers. [4]

The Scottish Football Association organises the Scottish Cup and the Scottish Youth Cup. Although the SFA are not involved in the day-to-day operation of the Scottish Professional Football League or other league competitions, they do appoint referees to officiate the games in these leagues, as well as dealing with player registrations and disciplinary issues. [3]

The Scottish Football Association encourages quality of governance in football clubs through a system of club licence awards. All SFA member clubs are assessed annually in four areas (ground, first team, youth team, and governance) and, if appropriate, awarded a licence at platinum, gold, silver, bronze or entry level. As of July 2019, [12] only Celtic have been awarded a platinum-level licence, while three clubs have been awarded gold-level licences: Hibernian, St Johnstone and St Mirren. All clubs in the Scottish Professional Football League, Highland Football League, and Lowland Football League are required to be licensed at entry level or above.

As of June 2020, [12] 104 clubs are full members of the Scottish Football Association, comprising:

The Scottish Football Association has affiliated to it the following six national associations:

The Scottish Junior Football Association (SJFA) is an affiliated national association of the Scottish Football Association and is the governing body for the junior grade of football in Scotland. The term "junior" refers to the level of football played, not the age of the players. The closest equivalent terminology would be non-League football in England, the difference being that junior football in Scotland is not similarly integrated into its football league system. Founded in 1886, the SJFA is responsible for disciplinary matters within the grade, certain player registration procedures and organising the annual Scottish Junior Cup. Other league and cup competitions are organised by three regional committees. The association headquarters are at Hampden Park, Glasgow, which is Scotland's national football stadium. There was an earlier Scottish Junior FA, which was founded in Glasgow in October 1880. This body also ran a Scottish Junior Cup competition during 1880–81 season but appears to have disbanded at the end of that season. 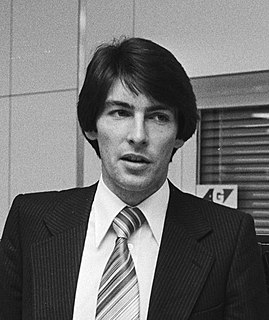 Gordon Duffield Smith is a Scottish football player, coach and executive. Smith played for several clubs, including Kilmarnock, Rangers, Brighton & Hove Albion and Manchester City. After retiring as a player, he worked as a football agent and BBC football pundit before being appointed chief executive of the Scottish Football Association in 2007, a post he held until his resignation on 19 April 2010. Smith then worked as the director of football of Rangers during the 2011–12 season. 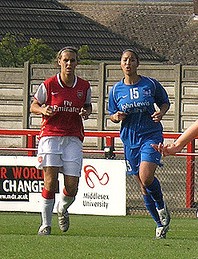 Julie Fleeting MBE, whose married name is Julie Stewart, is a Scottish former international footballer who last played as a striker for Scottish Women's Premier League club Glasgow City. Previously, she spent nine years at English club Arsenal and was the first Scot to play as a full-time professional in the WUSA playing for San Diego Spirit. She won the Scottish Women's League title with Ayr and seventeen major trophies with Arsenal.

James Ross Jack is a Scottish football player and manager.

Stewart Regan is the former CEO of Yorkshire County Cricket Club and the Scottish Football Association. He was also Director of the English Football League Championship, a position he took up following 17 years in the brewing industry with both John Smith's Brewery and Bass Brewery. Regan was Strategic Planning Director for Bass and part of the senior team involved in the sale of the company's brewing arm to the American brewer, Coors.

The Scottish football referee strike refers to the unprecedented withdrawal of services by top level referees in Scottish football, following a dispute between the Scottish Senior Football Referees' Association and the Scottish Football Association. It affected 20 matches scheduled for the weekend of 27/28 November 2010 in the Scottish Premier League, the Scottish Football League, the Scottish Cup, as well as the 2010 Scottish Challenge Cup Final. When combined with significant weather disruption, the effect of the strike was that only four games went ahead, all in the SPL on 27 November, using replacement referees drawn from Israel, Luxembourg and Malta. It was the first time since 1905 that a domestic Scottish match had been refereed by someone from outside Scotland.

Charles Alexander Green is a British businessman and was the Chief Executive of Rangers Football Club. Born in Mexborough in South Yorkshire he started his career as a professional footballer but failed to make a first-team appearance at either Sheffield United or Doncaster Rovers before drifting into non-league. Following a switch to business he has since held a number of positions before taking over at Rangers, including a period as Chief Executive of Sheffield United.

Michelle Kerr is a Scottish football manager and former player. As a player Kerr was a powerful centre back, who captained Scotland as well as clubs including Kilmarnock and Hibernian. During her playing career, Kerr won every domestic honour in Scotland and played in the UEFA Women's Cup. She won 59 caps for Scotland between 1989 and 2008, scoring three goals.

The Scottish Lowland Football League (SLFL) is a football league operating in central and southern Scotland. 17 teams currently compete in the league with teams drawn from the Lowlands area of Scotland.

Scotland–Ireland '08 was an unsuccessful bid by the Scottish Football Association (SFA) and the Football Association of Ireland (FAI) to host the 2008 UEFA European Championships. In February 2002, the Scottish FA and the FA of Ireland officially confirmed a joint bid for Scotland and the Republic of Ireland to host the 2008 UEFA European Championships. Had the bid been successful, it would have been the first major competition hosted by both nations and the first held on the British Isles since UEFA Euro 1996, hosted by England.