Following the adoption of professionalism in 1893, the Scotland national football team continued to field both professional and amateur players, but by the outbreak of the First World War in 1914, the number of amateurs winning international caps was in decline. [1] Between the formation of the SAFA in 1909 and 1926, the SFA turned down requests from the SAFA, the FA and the FFF to stage international matches featuring a Scottish team made up of purely amateur players. [2] One reason was that a Scottish amateur national team featuring no players from wholly amateur Scottish League First Division club Queen's Park would not be in the national interest, due to the prospective Scotland amateur matches clashing with Queen's Park's. [2] In August 1926, the SAFA announced that the first Scotland amateur international match would take place against their English counterparts on 18 December that year at Filbert Street, with the team's selection being determined by the SFA. [2] In front of a 10,000 crowd, Scotland won the match 4–1, courtesy of two goals from Laurie McBain and one each from George Jessiman and James Crawford. [3]

Between 1926 and 1939, Scottish League First Division club Queen's Park provided the majority of the players for the Scotland amateur team, with many of the players winning full international caps as well. [1] [4] With England as the biggest opponent and crowd draw amongst the Home Nations, the strongest possible team was selected and often included an all-Queen's Park XI. [1] In the same period, Scotland played regular friendly matches against the Wales and Ireland amateur representative teams and the matches were used to experiment with lineups featuring amateur players from other Scottish League clubs, in addition to amateurs playing in the Highland League, East of Scotland League, the Scottish Junior leagues, for Scottish Universities and in England. [1] Friendly matches were played versus France and Denmark in 1932. [1] [2]

In its first entry into the unofficial British Amateur Championship in the 1927–28 season, [5] Scotland finished as runners-up to England and won the competition for the first time during the 1929–30 season, finishing undefeated. [6] Further victories followed in the 1933–34, 1935–36 and 1936–37 seasons, [7] before the outbreak of the Second World War in August 1939 caused the cessation of amateur international football. [1] Scotland's penultimate match before the declaration of war resulted in its heaviest defeat, 8–3 versus England at Champion Hill on 11 March 1939. [8]

Following the end of the Second World War in 1945, the Scottish amateur team did not play again until 1949. [1] The SAFA assumed responsibility for team selection and Scotland's first match in a decade took place versus Ireland at Grosvenor Park on 16 March 1949, with John Boyd scoring a late equaliser to salvage a 2–2 draw. [9] The team would win just two more British Amateur Championships over the next 25 years, in the 1951–52 and 1961–62 seasons. [1] Starting in 1952, amateur internationals were regularly staged against non-Home Nations opposition and two years later, the SFA once again became responsible for team selection. [1] The team entered two competitions in 1963, the FA Centenary Amateur Tournament and the Uhuru Cup in Kenya and finished as winners and runners-up respectively. [1] Scotland finished as runners-up in the 1966–67 UEFA Nations Amateur Cup, losing 2–1 to Austria at the Lluís Sitjar Stadium in Palma, Majorca. [1] The team played its final match on 5 April 1974, a 1–1 British Amateur Championship draw with England at Highfield Road. [10] The team ceased to exist later that year, when the FA abolished the distinction between amateurism and professionalism in domestic football. [1] 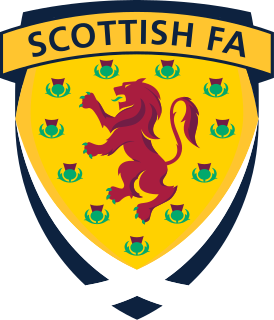 Vale of Leven Football Club are a Scottish football club based in the town of Alexandria, in the Vale of Leven area of West Dunbartonshire. Nicknamed the Vale and formed in 1939, they play at Millburn Park. They play in the West of Scotland League Conference C, the seventh tier of Scottish football and wear blue and white strips. 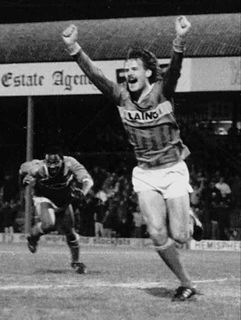 Roy McDonough is an English former professional football player and manager in the English football league.

Thomas Stewart was a Scottish amateur footballer who played as a right half in the Scottish League for Queen's Park and in English non-League football for Bishop Auckland and Romford. He captained Scotland at amateur level and represented Great Britain at the 1952 Summer Olympics.

James Barbour McAlpine, sometimes known as J. B. McAlpine or Mutt McAlpine, was a Scottish amateur footballer who played as an inside left for Queen's Park in the Scottish Football League. He is Queen's Park's record goalscorer and second-highest appearance-maker, having scored 192 goals in 547 appearances in all competitions. He later served on the club's committee and as president. In September 2013, Queen's Park's new youth and community building at Lesser Hampden was named the "J. B. McAlpine Pavilion".

Robert Lindsay Cromar was a Scottish amateur football right half and right back who made over 360 appearances in the Scottish League for Queen's Park. He captained the club and later served as president. Cromar represented Scotland at amateur level and captained the team on occasion.

Peter Gordon Blyth Buchanan is a Scottish retired amateur football centre forward who made over 200 appearances in the Scottish League for Queen's Park. He later served on the club's committee and as president. He is Scotland's joint-top scorer at amateur level and made two 1964 Summer Olympic qualifying appearances for Great Britain.

Herbert Dickson was a Scottish amateur footballer who made over 210 appearances as a left back in the Scottish League for Queen's Park. He was described as "of powerful stature and kicks the ball accurately and confidently with either foot. His recovery powers too are first rate".

Jean Louis Pollatschek is a Scottish former football left back and manager who played in the Scottish League for Queen's Park and Hamilton Academical. He was capped by Scotland at amateur level and after his retirement, he became a manager and coach. Pollatschek managed the Glasgow University team, which reached the second round of the 1975–76 Scottish Cup and later served as manager of Scotland Women. He also coached at Clydebank and former club Hamilton Academical.

Henry Gordon Wilson is a Scottish retired amateur footballer who played in the Scottish League for Queen's Park as a goalkeeper. He was capped by Scotland at amateur level. Wilson also played rugby union.

The Wales national amateur football team was the amateur representative team for Wales at football. It was formed in 1908 and continued until 1974.