The Lithuanian Football Federation (LFF) (Lithuanian : Lietuvos futbolo federacija) is the governing body of football in Lithuania. The Federation is responsible for football development in the country and for the national teams, including the Lithuania national football team. It is based in Vilnius. LFF became a member of FIFA in 1923, but following Lithuania's annexation by the Soviet Union it was disbanded. [1] It became a member again in 1992 after Lithuania regained its independence. The top division is A Lyga.

When one French journalist saw a full basketball arena (where "Lietuvos rytas" fought in ULEB cup semifinals) close to an empty stadium (where a Baltic Football League match took place) he published an article that Lithuania is a land where "the king of sports" has to live in basketball’s shadow.

In reality, the popularity of football is on the rise and the very few games that are on par in terms of quality with the ULEB cup semifinals also attract full stadiums as well as a TV following. This craze is mostly imported from other European nations, such as England, where many Lithuanians emigrated since the country has joined the European Union in 2004.

However, very unlike basketball, Lithuanian football is weak. The national team never even qualified at the European Championships let alone the World Cup. In football the element of luck is bigger than is basketball, therefore there were times when the Lithuanians scored draw against major teams such as Germany, Italy or Spain. However, defeats to the likes of the Faroe Islands or Liechtenstein soon afterward dash the hopes of Lithuanian fans and decrease the popularity of football.

Football clubs of Lithuania attract less funding than their basketball counterparts and so they are weak, relying on Lithuanian players and foreigners who didn’t manage to get a hold into their national leagues. Not a single Lithuanian team ever took part in main stages of the Champions’ League or the UEFA Cup. Moreover, the Lithuanian national football league ("A lyga") is frequently dipped into scandals of betting fraud. "Panevėžio Ekranas" from Panevėžys long dominated this league in the early 2010s, amassing a yearly budget of 2 million Euro (yes, this was the richest football club in Lithuania). "FBK Kaunas" used to prevail in the 1990s and 2000s (both the Kaunas and Panevėžys teams were eventually expelled from the league in 2009 and 2015 respectively, because of debts and controversies). "Vilniaus Žalgiris" was the best Lithuanian team in the 1980s and still has a larger fan base than other Lithuanian football clubs. It has recently returned to prominence, dominating the league once again in the 2010s." [2] 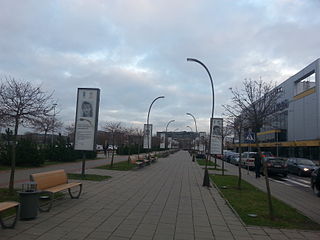 Futbolo klubas Žalgiris, commonly known as FK Žalgiris, Žalgiris Vilnius or simply Žalgiris is a Lithuanian professional football club based in Vilnius. The club competes in the A Lyga, the top flight of Lithuanian football. The club was founded as Dinamo in 1947. The club's name commemorates the victorious Battle of Žalgiris. Žalgiris has featured many Lithuanian football legends during their history, including Arminas Narbekovas, Valdas Ivanauskas, Edgaras Jankauskas and Deividas Šemberas. They have won the Lithuanian Championship 7 times, the Lithuanian Football Cup 12 times and the Lithuanian Supercup 6 times.

FK Sūduva is a professional football club based in the city of Marijampolė, Lithuania. Founded in 1968. The club are the defending football champions of Lithuania.

Football Club Stumbras was a professional football club, based in Kaunas, Lithuania, which played in A Lyga, the top tier of Lithuanian football. Founded in 2013 on the basis of the NFA, the club has reached the heights of Lithuanian football in a fairly short period of time. It became infamous for one-sided footballer contracts. The club stopped functioning mid-season in 2019 after the owner pulled out the funds. The club played its home matches at the Darius and Girėnas Stadium and used the NFA stadium in Kaunas as an alternative.

Futbolo klubas Panevėžys, commonly known as Panevėžys is a Lithuanian football team from the city of Panevėžys. The team has been promoted to the Lithuanian A Lyga for the 2019 season.

The 2017 Lithuanian Football Cup Final was the 72nd Lithuanian Football Cup final and took place on 24 September 2017 between Žalgiris and Stumbras. Stumbras qualified for the final for the first time in its history, while Žalgiris were the defending champions, having won the last six finals in the row. Stumbras won the final 1–0 after a late goal by Nasro Bouchareb, who was selected player of the match. Kaunas' side became first club to win the final from their first try after Neris Vilnius did it in 1992 and also managed to break Žalgiris domestic dominance of 14 straight titles in the last 5 years.