It was formed in 1895, was a founder member of FIFA in 1904 and joined UEFA during its foundation year, 1954. [1] FIFA is now based in Switzerland at Zürich. Also UEFA is based in the Swiss city of Nyon.

ASF-SFV is the abbreviation of the associations name in three of the national languages of Switzerland. ASF stands for both French (Association Suisse de Football) and Italian (Associazione Svizzera di Football), while SFV is the German (Schweizerischer Fussballverband).- Romansh - It is abbreviated as ASB (Associaziun Svizra da Ballape). 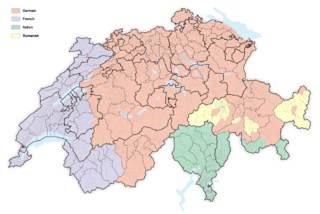 The four national languages of Switzerland are German, French, Italian and Romansh. German, French and Italian maintain equal status as official languages at the national level within the Federal Administration of the Swiss Confederation, while Romansh is used in dealings with people who speak it. In some situations, Latin is used, particularly as a single language to denote the country.

1895 in sports describes the year's events in world sport. 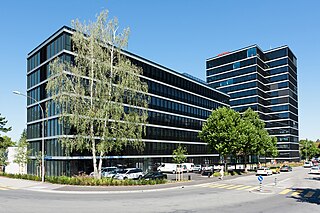 The Hans-Reinhart-Ring is a prestigious Swiss award in theatre. Since 2014 it is part of the Swiss Theater Awards as the Grand Award for Theater/Hans Reinhardt Ring.

The Swiss Cup is a football cup tournament that has been organised annually since 1925–26 by the Swiss Football Association. Since 1999 the winner qualifies for the UEFA Europa League. 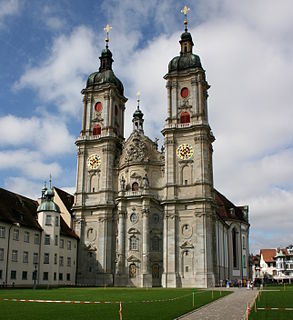 The Catholic Church in Switzerland is organised into six dioceses and two territorial abbeys, comprising approximately 3 million Catholics, about 38.6% of the Swiss population.

The Swiss Music Pedagogic Association (SMPA) is the umbrella organisation of music educators, pedagogues and music teachers in Switzerland.

Ramona Bachmann is a Swiss professional footballer who plays as a forward for French Division 1 Féminine club Paris Saint-Germain and the Switzerland national team.

Swiss Book is the Swiss national bibliography. It is a bi-monthly publication of the Swiss National Library, available in print, in PDF format, and online.

The Swiss Women's Cup is a women's football cup tournament that has been organised annually since 1975 by the Swiss Football Association (SFV-ASF).

Silvan Widmer is a Swiss professional footballer who plays as a right-back for Swiss club FC Basel.

Peter Heinrich Gilliéron is a Swiss lawyer and football official. Since June 2009, he has been president of the Swiss Football Association. He is a member of the UEFA Executive Committee, chairman of UEFA's Fair Play and Social Responsibility Committee, and deputy chairman of UEFA's Legal Committee.

The 2019–20 FC Basel season was the 126th season in the club's history and the 25th consecutive season in the top flight of Swiss football following their promotion in the 1993–94 season. The domestic league season started on the weekend of 19–21 July 2019. Basel were runners-up in the previous Super League season and were therefore qualified for 2019–20 UEFA Champions League second qualifying round. Basel competed in round 1 of the 2019–20 Swiss Cup on 17 August 2019.

The 2019–20 Swiss Cup was the 95th season of Switzerland's annual football cup competition. The competition began on 16 August 2019 with the first games of Round 1 was originally scheduled to end on 24 May 2020 but the final was rescheduled to 30 August 2020, due to the COVID-19 pandemic.

Dominique Blanc is an Swiss football official, businessman former player and former referee. In 2019, Blanc was appointed to be the President of the Swiss Football Association.