The competition made every attempt to maintain the status of a top-level tournament. Newcastle United were expelled from the 1976–77 competition for playing a weakened team in the first leg of their quarter-final against Ayr United. [1] Over the years, however, English entrants were increasingly drawn from the lower divisions and in 1981 the Scottish clubs withdrew as the public showed little interest in the competition. As the final winners, Chesterfield still hold the trophy and it is displayed in their Board Room. The competition continued, with English clubs only, as the Football League Group Cup.[ citation needed ]

In the 1987–88 season, an attempt was made to revive the competition as the Anglo-Scottish Challenge, pitting the holders of the FA Cup and Scottish Cup against each other, but after a poor attendance for the first leg between Coventry City and St Mirren the competition was shelved, with the second leg never played. [2] [3] [4]

Nottingham Forest's victory in the 1976-77 final over Orient was their first trophy under the management of Brian Clough, who later stated that he took the tournament seriously (when many other clubs did not) and considered it the springboard for Forest's future success, as they would go on to win a First Division title and two European Cups over the following 3 seasons. Clough had taken a similar stance on the competition’s predecessor, the Texaco Cup, and won it with Derby County in 1972, the same year he guided them to their first league title.

The format of the competition remained constant throughout the six years of its existence, and indeed the format was the same as the last edition of Its forerunner, the Texaco Cup. [5]

Sixteen English clubs competed in four groups of four, with the winners of each group qualifying for the quarter-finals. Clubs played each of the other teams in their group once, with two points awarded for a win, one for a draw, and a bonus point for each side that scored three or more goals in a single match. [5]

In the early years, around half of the English clubs were drawn from that season's First Division (excepting clubs playing in Europe), although by the latter years of the tournament only two or three top-level English sides were playing, with participation stretching down to Third and Fourth Division sides.[ citation needed ]

St Mirren became the only Scottish winner of the event following their success in 1979–80, defeating Bristol City 2–0 at Ashton Gate Stadium in the first leg, before a 3–1 home 2nd leg victory on 16 April 1980. [7]

Chesterfield's victory in the 1980–81 event was secured with an extra-time goal from Alan Crawford.[ citation needed ] 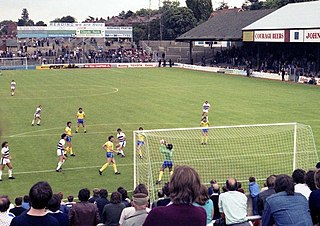 The Football League Group Cup was a short-lived football competition which first took place during the 1981–1982 season. For English clubs it was a replacement for the Anglo-Scottish Cup, which had been discontinued due to the withdrawal of Scottish League clubs. For the 1982–83 season it was renamed as the Football League Trophy.

The 1927–28 Scottish Cup was the 50th staging of Scotland's most prestigious football knockout competition. The Cup was won by Rangers who defeated Celtic 4–0 in an Old Firm final; it was their first victory in the competition for 25 years – the last had been in 1903, with four defeats in finals since then.

The 1925–26 Scottish Cup was the 48th staging of Scotland's most prestigious football knockout competition. The tournament began on 23 January 1926 and ended on 10 April 1926. The cup was won by St Mirren, who defeated the previous years cup winners Celtic 2–0 in the final.

The 1976–77 season was Cardiff City F.C.'s 50th season in the Football League. They competed in the 22-team Division Two, then the second tier of English football, finishing eighteenth.

The 1977–78 season was Cardiff City F.C.'s 51st season in the Football League. They competed in the 22-team Division Two, then the second tier of English football, finishing nineteenth.

The 2011–12 Football League Cup was the 52nd season of the Football League Cup, a knock-out competition for the top 92 football clubs played in English football league system. Birmingham City were the defending champions, but were knocked out 2–0 by Manchester City in the Third Round.

The 1887–88 Scottish Cup was the 15th season of Scotland's most prestigious football knockout competition. Renton won the competition for the second time after they beat Cambuslang 6–1 in the final. The result set a new record as the largest margin of victory in a Scottish Cup Final - a record that was equalled by Celtic in 1972 but has never been bettered.

The 2016–17 FA Cup was the 136th edition of the oldest recognised football tournament in the world. It was sponsored by Emirates, and known as The Emirates FA Cup for sponsorship purposes. 736 clubs were accepted into the tournament, and it began with the Extra Preliminary Round on 6 August 2016, and concluded with the final on 27 May 2017. The winner qualified for the 2017–18 UEFA Europa League group stage.