The 2019 Antenna Awards were held on 5 October 2019 at the Deakin Edge at Federation Square in Melbourne. [1] [2] The ceremony was announced on 4 July 2019, and recognised excellence in Australian community television of the eligibility period, running between 1 July 2014 and 30 June 2019. [3]

It was hosted by comedian and former Live on Bowen presenter Dilruk Jayasinha. [4] The ceremony was broadcast live from 8:00pm AEST on C31 Melbourne, Channel 44 Adelaide and WTV Perth, and was streamed live on Facebook. [5] On 9 October, the ceremony was made available to stream on YouTube. [6]

This was the 9th Antenna Awards ceremony – the first since 2014 – and marked 25 years since the first broadcast of C31 Melbourne. Nominations were accepted from producers of programs that aired on terrestrial community television – including the now-defunct Television Sydney and 31 Brisbane – as well as satellite and cable channels Aurora and ICTV. [3]

The Marngrook Footy Show was a sport panel show broadcast in Australia. Debuting in 2007, the show aired on NITV, and was previously simulcast on Channel 31 Melbourne. 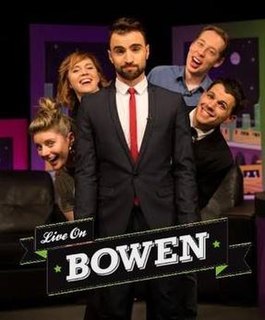 Live on Bowen was a one-hour Melbourne comedy talk show and variety show produced by RMITV with the support of the RMIT Student Union which aired on C31 Melbourne. The show featured comedic segments, special guest interviews and music acts ranging from the up-and-coming to high-profile artists. Like its predecessor Studio A, the show aimed to provide a platform to showcase an array of Melbourne’s up and coming talent.

Spicks and Specks was an Australian music-themed comedic television quiz show, a revival of the original Spicks and Specks series that was telecast on ABC1 for seven seasons and 277 episodes.

The 56th Annual TV Week Logie Awards was held on Sunday 27 April 2014 at the Crown Palladium in Melbourne, and broadcast on the Nine Network. The red carpet arrivals was hosted by Sonia Kruger and Jules Lund.

The 58th Annual TV Week Logie Awards were held on Sunday 8 May 2016 at the Crown Palladium in Melbourne, and broadcast live on the Nine Network. Public voting for the Best Award categories began on 16 November 2015 and ended on 17 January 2016. Nominations were announced on 3 April 2016 along with the winners of the Outstanding Newcomer Awards.

The 2004 Antenna Awards ceremony honoured the best in Australian community television in 2003, and took place on February 28, 2004, at Storey Hall, RMIT City Campus, Melbourne, beginning at 7:00 p.m. AEST. The ceremony, the first of its kind in Australia, was announced on December 29, 2003. Produced by Kristy Fuller and directed by Craig Young, the ceremony was hosted by Esther Makris and Gary Mitchell.

Cram was an Australian game show hosted by Peter Helliar, which premiered on Network Ten on 2 November 2017 until 14 December 2017.

Under the Milky Way is an Australian television comedy series which first screened on community television in 2016. The series was also released as a movie in 2017.

My Life Is Murder is an Australian murder mystery, crime comedy-drama television series, broadcast on Network Ten. The ten part series premiered on 17 July 2019, at 8:40 pm. In the United States, the series began streaming on Acorn TV on 5 August 2019 and in the United Kingdom, to Alibi on 24 September 2019.