Aurora Community Channel is an Australian subscription television channel that screens locally produced community television programs. Launched in 2005 on the Foxtel, it is currently on channel 173, prior to the launch of Christian channels on Foxtel, it was on Channel 183. Aurora is available to all digital subscription TV subscribers on the basic tier.

As a not for profit independent channel, Aurora broadcasts original Australian programs and understanding of community issues and interests. 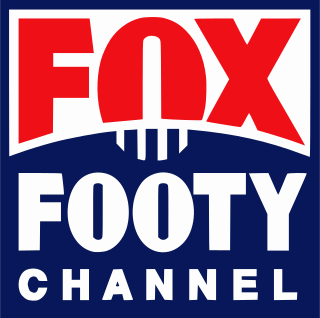 The Fox Footy Channel was a channel exclusively dedicated to Australian rules football. It was owned by Foxtel and operates out of their Melbourne based studios. From 2002 - 2006 it was available on Foxtel, Austar, Optus Television, TransTV and Neighbourhood Cable until transmission ceased on 1 October 2006. The channel was revived as Fox Footy for the 2012 AFL season after a new broadcast agreement was reached between Fox Sports and the AFL.

Andrew "Andy" Maher is an Australian sports journalist and broadcaster for the Seven Network and Melbourne sport radio station 1116 SEN. He is best known for founding AFLX and covering both Australian rules football and the Big Bash League for the Ten television network, as well as hosting AFL review program Before the Game.

Fox Footy is an Australian rules football subscription television channel dedicated to screening Australian rules football matches and related programming. It is owned by Fox Sports Pty Limited, operated out of their Melbourne based studios and available throughout Australia on Foxtel, and Optus Television. The channel is a revival of the former Fox Footy Channel, which was in operation between 2002–2006. The channel recommenced prior to the 2012 AFL season after a new broadcast agreement was reached between the former Premier Media Group, Austar, Foxtel and the Australian Football League (AFL).

3ZZZ is an ethnic community radio station in Melbourne, Victoria that currently broadcasts programs in over 70 languages on 92.3 MHz FM and is licensed to Mount Dandenong, Victoria.

Fox Sports is an Australian group of sports channels, which is owned by Fox Sports Pty Limited. Its main competitors are ESPN and beIN Sports, both available as part of a Foxtel or Kayo Sports subscription.

Main Event is Australia's only pay-per-view channel. It transmits through Foxtel and Optus Television, who jointly own the channel. It broadcasts major sporting and entertainment events such as boxing, professional wrestling, mixed martial arts and concerts.