9 KK Road is a 2010 Malayalam mystery film directed by Simon Kuruvila under the banner of Sun Pictures. The film features Babu Antony, Vijayaraghavan and Nishanth Sagar in the lead roles. Several major political leaders from Kerala make special appearances in the film. [1]

A regular mystery tale, the story begins with the discovery of four dead bodies in a deserted quarry. The Chief Minister involves into the case and appoints the IPS officer Devdas (Babu Antony) to investigate. Initially, Devdas is accompanied by one aide (Mala Aravindan) but that person walks out giving some excuses. Then Devdas is joined by Noushad (Shammi Thilakan) and the duo gets brisk in their investigation. Devdas is one man who is known to get into the cracks of any issue until justice is got. Whether he is successful in his mission or not forms the rest of the story.

Moonnam Mura is a 1988 Indian Malayalam-language action thriller film directed by K. Madhu and written by S. N. Swamy. Starring Mohanlal, Suresh Gopi, Lalu Alex, Revathi, and Mukesh. The plot deals with a terrorist group kidnapping a group of political individuals who were vacationing, and the followed up rescue operation of the police led by Ali Imran.

Pappan Priyappetta Pappan is a 1986 Indian Malayalam-Fantasy film directed by Sathyan Anthikad and written by Siddique–Lal. It stars Mohanlal, Rahman, Thilakan, Lissy, Bahadoor, Unni Mary, Rajan P. Dev and Sankaradi. This is the debut film of Siddique-Lal duo and Harisree Ashokan. The storyline is similar to Heaven Can Wait.

Georgootty C/O Georgootty is a 1991 Indian Malayalam–language romantic comedy / drama film starring Jayaram, Thilakan and Sunitha in major roles. It was directed by Haridas and written by Ranjith, the film was produced under the banner of Chandragiri Productions. It was Haridas' directorial debut. Haridas got the Kerala State Film Award for Best New Face Director for this film. The music was composed by Mohan Sithara with lyrics by Gireesh Puthenchery. 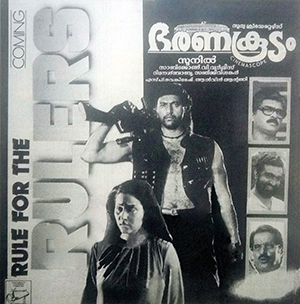 Bharanakoodam (transl. Government) is a 1994 Indian Malayalam-language political action film written and directed by Sunil and written by Sab John. It stars Babu Antony and Geetha. This film was a blockbuster

Joker is a 2000 Indian Malayalam-language satirical drama film written and directed by A. K. Lohithadas and produced by Salim Sathar under the banner Aachis Films. The film stars Dileep and Manya, with actors Nishanth Sagar, Bahadoor, T. S. Raju, Mamukkoya and Bindu Panicker play the supporting roles. The film was edited by A. Sreekar Prasad and the cinematography was handled by Venugopal. The film's soundtracks all were composed by Mohan Sithara while S. P. Venkatesh scored the background music. Joker was distributed by Aachis films through Aadithya Release. The film was a blockbuster in the year and one of the best movies of Malayalam Cinema and also one of the successful movies of actor Dileep. This was the last film of the Malayalam actor Bahadoor.

Mark Antony is a 2000 Indian Malayalam film, directed by T. S. Suresh Babu and produced by Safeel and Minraj.Story by Shaji T Nedumkallel and sreen play and dialogue By kaloor Dennis. The film stars Suresh Gopi, Divya Unni, Janardanan and Lalu Alex in lead roles. The film had musical score by Berny-Ignatius.

August Club, also called August Club Since 1969, is a 2013 Malayalam romantic drama film directed by K. B. Venu. Rima Kallingal stars in the story about the nuances in marital life. The film's screenplay is written by Anantha Padmanabhan and is based on his novelette titled Venalinte Kalaneekkangal. August Club marked the debut of both K. B. Venu and Anantha Padmanabhan. The film was produced by V S Atheesh.

Aayudham is a 2008 Malayalam-language film, directed by M. A. Nishad. The film stars Suresh Gopi, Thilakan, Bharathi, Karthika and Bala. The film had musical score by Alphonse Joseph and Biji Bal.

Chukkan is a 1994 Indian Malayalam-language film, directed and produced by Thampi Kannanthanam. The film stars Suresh Gopi, Gouthami, Thilakan and Kaviyoor Ponnamma in the lead roles. The film has musical score by S. P. Venkatesh.The movie had a good run at Box office.

Kandathum Kettathum is a 1988 Indian Malayalam-language film, directed by Balachandra Menon. The film stars Thilakan, Balachandra Menon, Usha and Baiju in the lead roles. The film, made at a production cost of ₹15 lakh was safe at the box office, even though it did average business.

Wanted is a 2004 Indian Malayalam-language thriller film directed by newcomer Murali Nagavally and written by Priyadarshan. The films stars five newcomers: Madhu Warrier, Aravindan, Anniyappan, Nishanth Sagar, and Suchitra. The film is a remake of the Telugu film Aithe (2003).