The administrative divisions of Chad have often changed since 1900, when the territory was first created by France as part of its colonial empire, with the name Territoire Militaire des pays et protectorats du Tchad. [1] The first subdivision took place in 1910, when 9 circumscriptions were made, named départements (departments) in 1935 and régions (regions) in 1947. As for the regions, they were further divided in districts. [2]

In 1960, immediately before independence, the régions became préfectures (prefectures), and the districts instead sous-prefectures (sub-prefectures). The prefectures were in origin 11, later on raising to 14. [3] In 1999 they were modified in 28 departments; this was ultimately changed in 2002, when 18 regions replaced them. [4] As for the regions, they are divided in departments, while the latter are divided in sub-prefectures. [4] After a series of splits in 2008 the number of regions increased to 22. [5] In 2012 Ennedi Region was split into Ennedi-Est and Ennedi-Ouest, producing the current 23 regions. [6] [4]

On September 5, 1900, a decree signed by the French President Émile Loubet officially created the Territoire militaire des pays et protectorats du Tchad as part of the growing French colonial empire. The new territory was placed under the command of a Commissioner who answered to the High Commissioner of the French Congo (called French Equatorial Africa (AEF) after 1910), of which Chad was a circumscription. [7]

It was only in 1958, when Chad was granted territorial autonomy, that the country was separated from the AEF. [8] Two years later Chad was to come full independence under the government of François Tombalbaye and of the Chadian Progressive Party. [9]

The first Governor-General of French Equatorial Africa, Martial Merlin, built in 1910 for all the colonies he administered a two levels structure. Chad was divided in 9 circonscriptions (circumscriptions), with Fort-Lamy (today N'Djamena) as capital; two years later, as an underdivision of the regions, the subdivisions were introduced. [2] The Mayo-Kebbi circumscription disappeared in 1911 when the left bank of the Logone River was ceded to the German colony of Kamerun as part of the exchange for the French protectorate over Morocco. the area was retaken by France in World War I, and some years later, in 1922, the circumscription was restored and given back to Chad. On the other side Moyen-Chari was part of Oubangui-Chari from 1925 to 1933. [10] [11]

In 1914 a new circumscription was added with Borkou-Ennedi, renamed Borkou-Ennedi-Tibesti in 1930 when the Tibesti was passed from Niger to Chad. [2]

In 1934 all the AEF was the object of a major administrative reorganization, known as Renard reform after the Governor-General Edouard Renard. Meant to cut down the maintainment costs and transform the AEF in a unitary colony divided in 4 regions. Chad was placed under a commandant de région who answered to the Governor-Delegate in Bangui, who instead was under the Governor-General in Brazzaville. [12] [13]

The circumscriptions of Chad took the name of departments and many of them were merged, while two departments, Logone (united with the Mayo-Kebbi) and Chari-Bangoran (Moyen-Chari and N'Délé) were separated from Chad and placed directly under Bangui's administration. [12] [13]

The radicality of these centralization measures proved themselves unsustainable, causing their reversion on the return to the previous structure of the AEF in 1936. In that year Logone and Moyen-Chari were returned to Chad while both Kanem-Batha and Chari-Baguirmi were split restoring the original 10 subdivisions. In 1944 the departments were brought to 9, when Bas-Chari and Baguirmi were merged back to recreate Chari-Baguirmi. [2] [12]

In 1937 Chad was made fully independent from Bangui but the administrator was given the lesser rank of commandant. The following year his rank was increased to governeur (governor), reestablishing a full parity among the AEF colonies. [2]

This is the situation of Chad on December 31, 1945, concerning departments and subdivisions: [14]

Chad is one of the 48 landlocked countries in the world and is located in North Central Africa, measuring 1,284,000 square kilometers (495,755 sq mi), nearly twice the size of France and slightly more than three times the size of California. Most of its ethnically and linguistically diverse population lives in the south, with densities ranging from 54 persons per square kilometer in the Logone River basin to 0.1 persons in the northern B.E.T. (Borkou-Ennedi-Tibesti) desert region, which itself is larger than France. The capital city of N'Djaména, situated at the confluence of the Chari and Logone Rivers, is cosmopolitan in nature, with a current population in excess of 700,000 people. 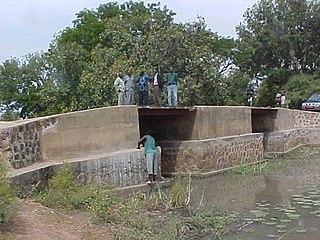 Transport infrastructure within Chad is generally poor, especially in the north and east of the country. River transport is limited to the south-west corner. As of 2011 Chad had no railways though two lines are planned - from the capital to the Sudanese and Cameroonian borders.during the wet season, especially in the southern half of the country. In the north, roads are merely tracks across the desert and land mines continue to present a danger. Draft animals remain important in much of the country.

Moundou is the second largest city in Chad and is the capital of the region of Logone Occidental. 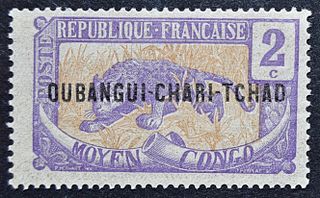 Ubangi-Shari was a French colony in central Africa which later became the independent country of the Central African Republic on August 13, 1960. It followed the establishment of the Bangui outpost in 1889, and was named in 1894.

Since 2002, the Republic of Chad has been divided into regions. It was previously divided into prefectures, and then departments.

The regions of Chad are divided into 61 departments. The departments are listed below, by name and by region.

Chad was a part of the French colonial empire from 1900 to 1960. Colonial rule under the French began in 1900 when the Military Territory of Chad was established. From 1905, Chad was linked to the federation of French colonial possessions in Middle Africa, known from 1910 under the name of French Equatorial Africa. Chad passed in 1920 to French civilian administration, but suffered from chronic neglect.

Chari-Baguirmi is one of the 23 regions of Chad. Its capital is Massenya. It is composed of part of the former Chari-Baguirmi Prefecture and parts of the sub-prefecture of N'Djamena). 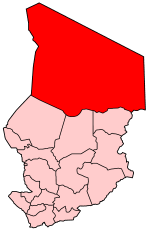 Mayo-Kebbi Est is one of the 23 regions of Chad. Its capital is Bongor. It is composed of the northern areas of the former prefecture of Mayo-Kebbi.

The Catholic Church in Chad is part of the worldwide Catholic Church, under the spiritual leadership of the Pope in Rome. The Apostolic Nuncio to Chad is Archbishop Pierre Nguyên Van Tot, appointed August 25, 2005.

Tandjilé is one of the 23 regions of Chad, located in the south-west of the country. Its capital is Laï. It corresponds to the former prefecture of the same name. 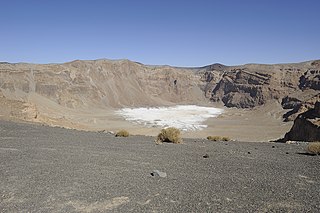 Ennedi-Ouest Region is a region of Chad, created in 2012 from the western half of Ennedi Region. It appears to cover the same territory as the former Ennedi Ouest Department. The capital of the region is Fada. 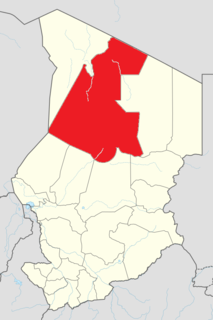 Miski is a town in the Tibesti Mountains of northern Chad, in the Yebbibou sub-prefecture of the Emi Koussi department of the Borkou region. The local population has been estimated at no more than 300 families, most of whom are members of the Teda people.