Air Headquarters East Africa (or AHQ East Africa) was a command of the British Royal Air Force (RAF) formed on 19 October 1940 by expanding AHQ RAF Nairobi. On 15 December 1941, the command was reduced to Group status as No. 207 (General Purpose) Group. On 16 November 1942, Air H.Q. East Africa was reformed by raising No. 207 Group back to Command status again. [1]

The onset of the East African Campaign in 1940 led to a significant buildup in what became Air HQ East Africa. The Italians held Ethiopia and Eritrea and quickly seized British Somaliland. Lieutenant General William Platt, Commandant of the Sudan Defence Force, commanded the forces invading Italian East Africa from Sudan during the campaign.

On 1 November 1940, a communications unit, Air HQ East Africa Communications Squadron, was established at RAF Nairobi; it was disbanded at RAF Eastleigh on 15 December 1941. [5]

The South Africans faced experienced Italian pilots, including a cadre of Spanish Civil War veterans. Despite its lack of experience, 1 SAAF claimed 48 enemy aircraft destroyed and 57 damaged in the skies over East Africa. A further 57 were claimed destroyed on the ground; all for the loss of six pilots—it is thought the unit was guilty of severe over-claiming. [6] From November 1940 to early January 1941, Platt continued to apply constant pressure on the Italians along the Sudan–Ethiopia border with patrols and raids by ground troops and aircraft. Hawker Hurricanes and more Gloster Gladiators began to replace some of the older models. On 6 December, a large concentration of Italian motor transport was bombed and strafed by Commonwealth aircraft a few miles north of Kassala. The same aircraft then proceeded to machine-gun from low level the nearby positions of the Italian Blackshirts and colonial infantry. A few days later, the same aircraft bombed the Italian base at Keru, fifty miles east of Kassala. The Commonwealth pilots had the satisfaction of seeing supply dumps, stores, and transport enveloped in flame and smoke as they flew away. One morning in mid-December, a force of Italian fighters strafed a Rhodesian landing-strip at Wajir near Kassala, where two Hawker Hardys were caught on the ground and destroyed and 5,000 US gal (19,000 l) of fuel were set alight, four Africans were killed and eleven injured fighting the fire. [7] [8]

AHQ East Africa included in November 1945 a large number of small support units, Nos 1586 and 1414 Meteorological Flights; 249 Squadron at Eastleigh; RAF Station Mombasa with 15 Embarkation Unit, No. 3 Section Air Ministry Directorate-General of Works (AMDGW); an RAF Unit at Mogadishu (to which a squadron of 324 Wing from Sudan, 213 Squadron, was dispatched as the Ogaden was being returned to Ethiopia in mid-1948, Lee FFME 40); 105 Maintenance Unit at Thika with a detachment, at Gilgil; and smaller units at Dar es Salaam, Diego Suarez, Kisumu, Mauritius, Nairobi, Pamanzi, Port Reitz (No. 1345 Anti-Malarial Flight); Seychelles, Tabora, and Tulear (an RAF Unit and a Marine Craft Section). [10]

Air H.Q. East Africa was disbanded on 15 September 1951, reformed on 1 February 1961, and disbanded on 11 December 1964. [1] In the 1950s and 1960s the RAF in East Africa was reduced to a single station, RAF Eastleigh, and about 500 personnel. RAF stations at Kisumu, Thika, and Mombasa (RAF Port Reitz) were thus eventually closed. No. 214 Squadron RAF made a six-month detachment to Eastleigh in 1951, during the Mau Mau Uprising. [11] No. 1340 Flight RAF used the Harvard in Kenya against the Mau Mau in the 1950s, where they operated with 20 lb bombs and machine guns against the insurgents.

The Air Officer Commanding served as air advisor to a number of former British territories in the region. [13] 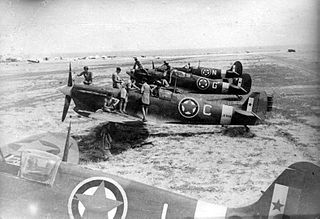 The Balkan Air Force (BAF) was an Allied air formation operating in the Balkans during World War II. Composed of units of the Royal Air Force and South African Air Force under the Mediterranean Allied Air Forces command, it was active from 7 June 1944 until 15 July 1945. Air Vice Marshal William Elliot and then George Mills, both RAF officers, were its Air Officer Commanding (AOC). 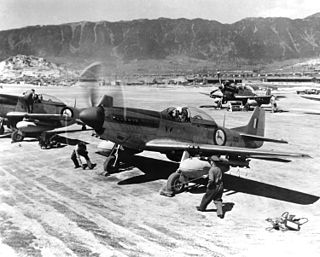 2 Squadron is a squadron in the South African Air Force which was formed in 1940. The squadron has a long history, having been involved in every single combat action in which the SAAF has taken part. During the Second World War it made a name for itself in the battles for East Africa, before distinguishing itself in North Africa as part of the Desert Air Force, and later in Italy. 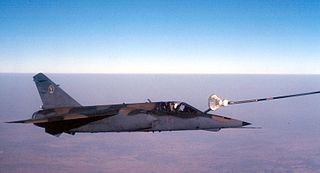 1 Squadron SAAF was an air force squadron of the South African Air Force and was formed at Air Force Station Swartkop in February 1920, equipped with De Havilland DH.9's part of the Imperial Gift donation to South Africa by Britain. On 31 August 1939 the squadron was re-designated as 1 Bomber/Fighter Squadron and this was then changed to 11 (Bomber) Squadron in December 1939. The squadron was resurrected in February 1940 by the renumbering of 6 Squadron, equipped with four Hurricane Mk 1's and six Furies. 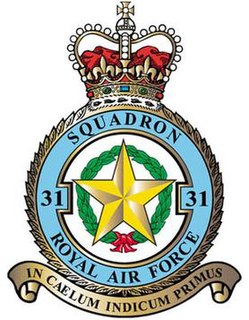 Number 31 Squadron, known as the Goldstars, was a squadron of the Royal Air Force. The Squadron lays claim to being the first military unit to fly in India, where it was based from 1915 to 1947. Throughout the Cold War, No. 31 Squadron was based in West Germany, flying from RAF Laarbruch and RAF Brüggen. Between September 1984 and March 2019, the Goldstars operated the Panavia Tornado GR1/4, initially from RAF Brüggen and after August 2001 from RAF Marham, Norfolk. No. 31 Squadron was disbanded on 14 March 2019 at RAF Marham and will reform in 2022 at RAF Waddington, Lincolnshire, eventually operating the General Atomics Protector RG1 by 2024. 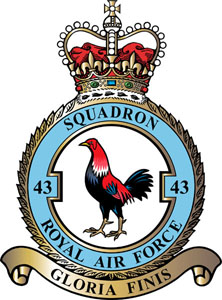 Number 43 Squadron, nicknamed the Fighting Cocks, was a Royal Air Force aircraft squadron originally formed in April 1916 as part of the Royal Flying Corps. It saw distinguished service during two world wars, producing numerous "aces". The squadron last operated the Panavia Tornado F3 from RAF Leuchars, Scotland, in the air defence role, until it was disbanded in July 2009. 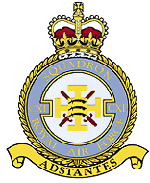 Number 111 (Fighter) Squadron, also known as No. CXI (F) Squadron and nicknamed Treble One, was a squadron of the Royal Air Force. It was formed in 1917 in the Middle East as No. 111 Squadron of the Royal Flying Corps during the reorganisation of the Egyptian Expeditionary Force after General Edmund Allenby took command during the Sinai and Palestine Campaign. The squadron remained in the Middle East after the end of the First World War until 1920 when it was renumbered as No. 14 Squadron. 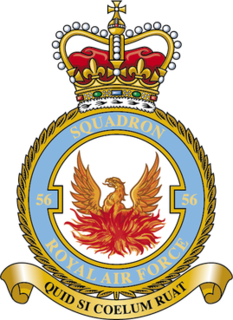 Number 56 Squadron, nicknamed the Firebirds for their ability to always reappear intact regardless of the odds, is one of the oldest and most successful squadrons of the Royal Air Force, with battle honours from many of the significant air campaigns of both the First and Second World Wars. 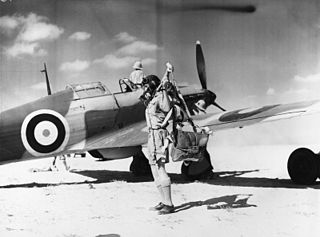 No. 232 Squadron of the Royal Air Force was active in both World War I and World War II in a variety of roles, having seen action as an anti-submarine patrol, fighter and transport squadron.

Air Headquarters Malta was an overseas command of the Royal Air Force (RAF) during the Second World War. It was established on 28 December 1941 by renaming RAF Mediterranean under Air Vice Marshal Hugh Lloyd. Lloyd was named Air Officer Commanding in Malta on 1 June 1941.

Air Headquarters Levant was a command of the British Royal Air Force (RAF) established on 1 December 1941, by renaming the command known as H.Q. RAF Palestine and Transjordan. It controlled RAF units in the Mandate of Palestine and in the Emirate of Transjordan. Prior to being disbanded on 27 July 1948, Air H.Q. Levant was a sub-command of RAF Middle East Command and its successors. RAF Middle East Command became a sub-command of the Mediterranean Air Command in February 1943.

AHQ Iraq was a command of the Royal Air Force (RAF).

No. 185 Squadron RAF was a Royal Air Force Squadron formed in World War I and reformed as a bomber and fighter unit in World War II. It then reformed in Malta in the post war period as a jet fighter squadron. 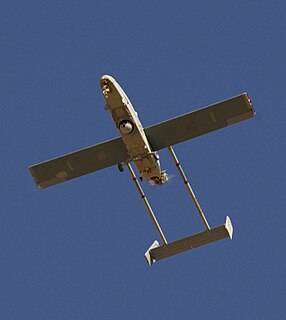 10 Squadron was a squadron of the South African Air Force. It was formed as a fighter bomber unit on 1 April 1939 and was deployed in a coastal defence role as part of Coastal Command SAAF until 1943. It was disbanded after the threat of Japanese naval actions off the South African coast had waned. It was re-activated as a fighter squadron on 25 May 1944 and deployed to the Middle East where the squadron saw service in Syria, Libya and the Aegean and was disbanded at the end of the war in Italy.