Wyllie began his first-class career with Canterbury in 1964 and played 210 matches for the province until 1979, serving as captain on over one hundred occasions. During this time, he was an integral part of such exploits for the province as the lifting of the Ranfurly Shield in 1969 from Hawke's Bay and then in 1972 from Auckland as well as captaining the province to wins over international touring sides such as England in 1973, Scotland in 1975 and Ireland in 1976.

Wyllie finally became an All Black in 1970 when he was selected to tour South Africa where he played in the second and third Tests. In the next three years, he played forty matches for New Zealand, including eleven Tests, and was captain on three occasions. Although he was discarded as an All Black after 1973, Wyllie remained a prominent player for Canterbury until 1979.

In 1982, Wyllie became coach of Canterbury and immediately enjoyed success when Canterbury won the Ranfurly Shield from Wellington and went on to hold the trophy for a record-equalling three years. Under his coaching, Canterbury won the National Provincial Championship (NPC) in 1983, and also recorded victories against international teams such as the British Lions in 1983 and the Wallabies in 1986.

In the 1986 New Year Honours, Wyllie was appointed a Member of the Order of the British Empire, for services to rugby football. [1]

Wyllie became a national selector in 1986 and he and his Auckland rival John Hart had significant roles as assistant coaches to Brian Lochore when the All Blacks won the 1987 Rugby World Cup. In 1988 Wyllie succeeded Lochore as coach, much to the annoyance of many, especially in Auckland, who favoured Hart.

Despite initial success as All Black coach, a decline starting in the 1991 season led to the NZRFU appointing Hart as joint coach for the 1991 World Cup. After the unsuccessful campaign, both coaches were overlooked when Laurie Mains was selected as All Black coach.

Wyllie went on to take various coaching roles in England, Ireland, South Africa and Argentina and from 1996-99 was in charge of the Argentina national side, taking the Pumas to the quarterfinals at the 1999 World Cup.

Todd Blackadder is a retired New Zealand rugby union player and professional rugby coach. He captained the national team, the All Blacks 14 times playing a total of 25 games and 12 tests. Blackadder captained the Crusaders to three Super Rugby titles during his time with the franchise while also winning two NPC titles with Canterbury.

The Ranfurly Shield, colloquially known as the Log o' Wood, is a trophy in New Zealand's domestic rugby union competition. First played for in 1904, the Shield is based on a challenge system, rather than a league or knockout competition as with most football trophies. The holding union must defend the shield in challenge matches, which are played at the shield holders home venue, and if the challenger is successful in their challenge they will become the new holder of the Shield.

Sir Michael Niko Jones is a New Zealand former rugby union player and coach. He was named by Rugby World magazine as the third best All Black of the 20th century after Colin Meads and Sean Fitzpatrick. John Hart, who first selected him for Auckland, called him "almost the perfect rugby player".

Rugby Southland is the provincial rugby union who govern the Southland Region of New Zealand. Their headquarters are at Rugby Park Stadium in Invercargill, which is also the home ground of the union's professional team, the Southland Stags who compete in the Mitre 10 Cup Championship Division and challenge for the Ranfurly Shield.

Sean Brian Thomas Fitzpatrick, is a former rugby union player who represented New Zealand, and is widely regarded as one of the finest players ever to come from that country. He is also the son of former player Brian Fitzpatrick. 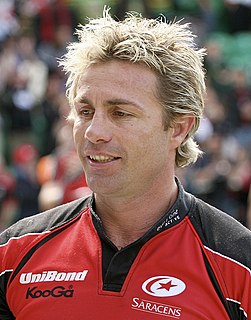 Justin Warren Marshall is a New Zealand former rugby union player. He played 81 games for the New Zealand All Blacks between 1995 and 2005.

The Canterbury Rugby Football Union is the governing body for rugby union in a portion of the Canterbury region of New Zealand. Its colours are red and black in a hooped design. The CRFU govern the running of the Canterbury representative team which have won New Zealand's first-tier domestic competition National Provincial Championship 14 times including a "six-peat" from 2008 to 2013 – with five in the National Provincial Championship, two in the Air New Zealand Cup, five in the ITM Cup and one in the Mitre 10 Cup. Their most recent victory was the 2017 Mitre 10 Cup. Canterbury also acts as a primary feeder to the Crusaders, who play in the Super Rugby competition.

John Bernard Hart is a New Zealand former rugby union personality who coached and managed both the All Blacks and the Auckland rugby union team, and played rugby for Waitemata and Auckland.

Paul Lane Penn was a New Zealand rugby union player, coach and administrator. A wing, Penn played for Taranaki and Wairarapa at provincial level, and later became coach of Wairarapa-Bush. He was an All Black selector from 1988 to 1991, and served as president of the New Zealand Rugby Football Union from 2001 to 2003.

The North Otago Rugby Football Union (NORFU) is a New Zealand rugby union province based in Oamaru and compete in the Heartland Championship. They are one of the strongest teams in The Heartland Championship, winning the Meads Cup section of the competition in its second year, 2007 as well as 2010. Their home ground is Whitestone Contracting Stadium, formerly Centennial Park.

The Buller Rugby Union (BRU) is a rugby union province based in the town of Westport, New Zealand. The Buller provincial boundary also includes other notable towns such as Reefton, Karamea, Granity, Charleston, Punakaiki and Murchison.

Robert Maxwell Deans is a New Zealand rugby union coach and former player, currently the head coach of Japanese club Panasonic Wild Knights. He was head coach of the Australian national team between 2008 and 2013. Deans had previously coached the Crusaders for eight seasons and was an assistant coach of New Zealand between late 2001 and 2003. As the coach of the Crusaders, Deans has won more Super rugby titles than any other. He has also coached Canterbury in the National Provincial Championship, winning the title in 1997. As a player, Deans represented Canterbury, first playing at fly half, and later fullback. He also played nineteen matches for the All Blacks, including five tests.