Founded in 2000 by Jim Weidner, K2JXW, the Amateur Radio Lighthouse Society (ARLHS) is devoted to maritime communications, amateur radio, lighthouses, and lightships. Its members travel to lighthouses around the world where they operate amateur radio equipment at or near the light. Collecting lighthouse QSLs is popular for some amateur radio operators. ARLHS is a membership organization with over 1665 members worldwide as of July 2009.

A convention is held in October each year. In 2010 the gathering was in Biloxi, Mississippi. In earlier years it has been held in Solomons, Maryland, St. Simons, Georgia, Port Huron, Michigan, and other sites. Membership benefits include a newsletter, email reflector, awards program, lighthouse expedition sponsorship, certificates, embroidered shoulder patch, a list of every known light beacon in the world capable of supporting a ham station (over 15,000 entries at last count—see "World List of Lights" info below), and a web site at .

The ARLHS has been featured in national magazines, such as CQ and WordRadio. Jim Weidner is its founding President; and Jim Buffington, K5JIM, is Vice President. The club call sign is W7QF and the website is

The ARLHS maintains a catalog of lighthouses called The World List of Lights (WLOL). [1] Its main feature is a short, and easily transmitted identification number for each lighthouse. The WLOL lists any lighthouse that is or was an Aid to Navigation (ATN) and can reasonably accommodate an amateur radio operation. Lights that are no longer in existence, but were once an ATN, also show up on the list, designated as historical. With over 15,000 entries, the WLOL is one of the most complete lighthouse catalogs in existence. 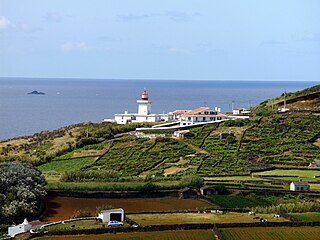 The Ponta das Contendas Lighthouse is lighthouse located along the promontory of Contendas, in the civil parish of São Sebastião, municipality of Angra do Heroísmo on the island of Terceira, in the Portuguese archipelago of the Azores.

Groote Kaap is a round steel lighthouse painted red with a white light casing on the North Sea coast in the dunes near Julianadorp by the sea, in the municipality of Schagen. The construction of the tower was completed in 1966. The tower was replaced in 1985.

The Gibraltar South Mole Lighthouse is one of several lighthouses in Gibraltar, a British Overseas Territory at the south end of the Iberian Peninsula. Also known as the Gibraltar "A" Head Lighthouse, it has a cast-iron, skeletal tower which is painted black and features two galleries. The lighthouse remains operational and is positioned west of the Rock of Gibraltar, on the South Mole at Gibraltar Harbour. It is operated by the Gibraltar Port Authority.

The Lighthouse of Carapacho is a beacon/lighthouse located along the cliffs of Ponta da Restinga, near the hamlet of Carapacho, civil parish of Luz on the island of Graciosa, the Portuguese archipelago of the Azores.

The Guia lighthouse is an active Portuguese lighthouse located at Cabo da Guia, about 2 km west of the centre of Cascais. It is an octagonal tower in white masonry with a red lantern that has a range of 18 nautical miles.

The Gibalta Lighthouse is an active Portuguese lighthouse located at Oeiras, about 10 km west of the centre of Lisbon. It is a white cylindrical tower with dome and red veins, with illumination being supplied by a red fluorescent light. It was rebuilt in 1954 following a landslide which destroyed the old light and killed ten people on a passing train.

The Esteiro Lighthouse is an active Portuguese lighthouse located at Oeiras, about 10 km west of the centre of Lisbon, in parkland that also contains the National Stadium of Portugal. It is a rectangular masonry tower covered with white tiles. The south side has two red horizontal bands that serve as identification during daylight.

The Mama lighthouse is located in the Carnaxide Sierra of the municipality of Oeiras, in Lisbon District, Portugal. It is built on a round hill, known as the Mama Sul, next to a Geodesic landmark. The Mama Lighthouse is about 4 km inland, northwest of Belém, and combines with the Esteiro and Gibalta lighthouses to indicate the alignment of the southern entrance to the Port of Lisbon.

The Bugio Lighthouse is situated on an island in the estuary of the River Tagus on the Fort of São Lourenço do Bugio, about ten kilometres west of Lisbon.

The São Julião Lighthouse is located in the fort of the same name, which is the largest sea defence structure in Portugal and is situated on a headland on the north bank of the River Tagus estuary in Oeiras, Lisbon District. It is a square masonry tower and the lantern is painted white, with a red dome.

The Fort of Cavalo Lighthouse is located in the Fort of São Teodósio da Ponta do Cavalo, on the western edge of Sesimbra, in the Setúbal District of Portugal. It started operations in 1896.

The Azeda Lighthouse went into operation on June 6, 1940, at the Quinta da Azeda in Setúbal, in Setúbal District, Portugal. Initially the light was mounted in a hut on a hill but new housing construction made it difficult to see and in 1996 a 31-metre tall cylindrical tower was constructed. The lighthouse is situated about 3 kilometres inland. In addition to supporting the light, the tower also functions as a water tower for the town of Setúbal.

The Outão Lighthouse is located in the coastal Fort of Santiago do Outão, on the right bank of the narrow estuary of the River Sado, to the west of Setúbal in Portugal.

The Penedo da Saudade lighthouse is located on the Atlantic coast in São Pedro de Moel parish in the municipality of Marinha Grande, in the Leiria district of Portugal. 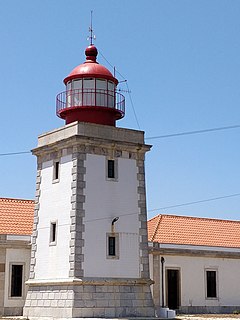 The Cabo Sardão Lighthouse is located at Ponta do Cavaleiro in the village of Odemira, in the parish of São Teotónio, at the westernmost point of the Alentejo region of Portugal.

The Sines Lighthouse is located at Cabo de Sines, in Sines, in the Setúbal District of Portugal. It is a 22-metre high white cylindrical tower with a red beacon. 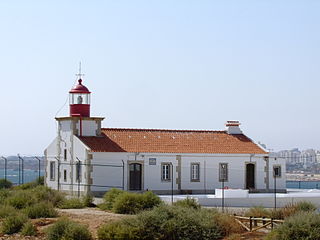 The Ponta do Altar Lighthouse is located in the Ferragudo parish of the Lagoa municipality in the Faro District of Portugal.