Troubridge read American studies at Middlesex University and State University of New York at New Paltz discovering the work of Dorothea Lange and the New Deal photographers. [1] In 1996 she won the Ian Parry award for her first social documentary story, Dublin's Urban Cowboys.

In 1998 Troubridge won a place on the Joop Swart Masterclass organized by World Press Photo that takes 12 young photographers and helps them towards a professional photographic career. [2] Troubridge was subsequently nominated and runner-up as Young Photographer of the Year in 1999 by the International Center of Photography in New York.

She has published three monographs. Her first solo work, The Trouble with Amelia focused on the subject of men. [3] Robert Crampton writing in The Times Magazine of her work said: "She sees most men as boys who haven't grown up ... Troubridge's instinct is to celebrate this boyishness rather than reform it or ridicule it or recoil from it".

Her second book Malta Diaries [4] (Trolley Books 2006), with an introduction by Edward de Bono, explored her relationship with the island and its people. It is also a personal exploration of family and traditions passed down from her family, as her mother is Maltese.

Troubridge's third book, Joan of Arc Had Style [5] was published in March 2015 with support from LVMH and De Beers), with a launch and exhibit at the Design Museum in London, as part of the exhibition Women, Fashion, Power. [6]

Troubridge's work has been exhibited at the Wallace Collection [12] and being exhibited and auctioned at Phillips and Christie's. [1] 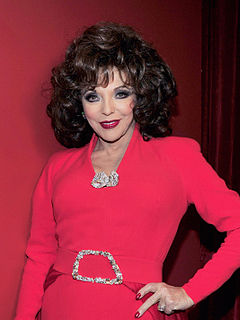 Dame Joan Henrietta Collins is an English actress, author, and columnist. Collins is the recipient of several accolades, including a Golden Globe Award, a People's Choice Award, two Soap Opera Digest Awards and a Primetime Emmy Award nomination. In 1983, she was awarded a star on the Hollywood Walk of Fame. She has been recognized for her philanthropy, particularly her advocacy towards causes relating to children, which has earned her many honours. In 2015, she was made a Dame by Queen Elizabeth II for her charitable services. 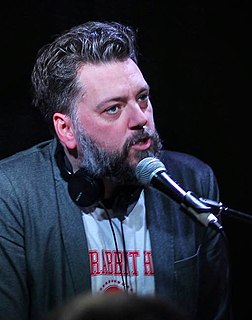 Iain Lee is an English broadcaster, writer, and former television presenter and stand-up comedian who hosts the phone-in talk show The Late Night Alternative on "pay to view" Patreon.

Aesthetica Magazine is an international art and culture magazine, founded in 2002. Published bi-monthly, it covers contemporary art from around the world across visual arts, photography, architecture, fashion and design. It has a readership of over 500,000 and national and international distribution.

Una Vincenzo, Lady Troubridge was a British sculptor and translator. She is best known as the long-time lesbian partner of Marguerite Radclyffe Hall, author of The Well of Loneliness.

Iain Forsyth and Jane Pollard are British artists and filmmakers. Forsyth was born in Manchester in 1973, Pollard in Newcastle in 1972. In 2013 they celebrated 20 years of working together with a party at the 100 Club in London.

Laura Whitmore is an Irish television presenter, model and actress. She is known for presenting I'm a Celebrity...Get Me Out of Here! Now! and Survival of the Fittest. In January 2020, she began presenting Love Island and its spinoff series Love Island: Aftersun. In September 2020, she replaced Mel B as a team captain on Celebrity Juice.

Words & Pictures was an object-based art magazine published between 1994 and 1997, each issue in a signed and numbered limited edition. It was published by British artists Iain Forsyth and Jane Pollard. Complete sets exist in several public collections, including the Tate Gallery in London, the National Art Library at the Victoria and Albert Museum, Yale Center for British Art in the USA. More than 200 artists and writers contributed to the project, including several Turner Prize winners. 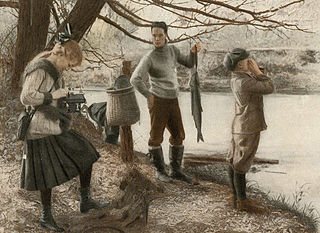 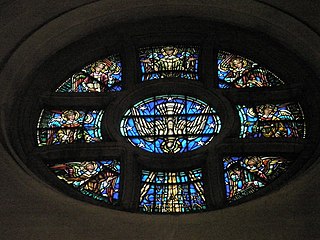 Moira Forsyth (1905–1991) was an English stained glass artist. Her father was Gordon Forsyth a Scottish ceramics designer, stained glass artist, and teacher. They both made impressive works for the St. Joseph's Church in Burslem, Stoke-on-Trent, Staffordshire. She made her name for her stained glass works, such as those found at Guildford Cathedral, Norwich Cathedral and Eton College Chapel.

Tatler is a British magazine published by Condé Nast Publications focusing on fashion and lifestyle, as well as coverage of high society and politics. It is targeted towards the British upper-middle class and upper class, and those interested in society events. Its readership is the wealthiest of all Condé Nast's publications. It was founded in 1901 by Clement Shorter. Tatler is also published in Russia by Conde Nast, and in Hong Kong, mainland China, Singapore, Taiwan, Malaysia, Indonesia, Thailand, and the Philippines by Edipresse Media Asia. The editions in Russia, mainland China and Taiwan are in local languages, while the editions in Hong Kong, Indonesia, Singapore, Thailand, Malaysia and the Philippines are in English. 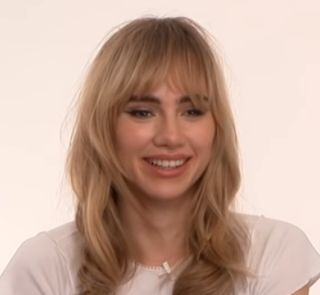 Alice Suki Waterhouse is an English model, actress and singer.

20,000 Days on Earth is a 2014 British musical documentary drama film co-written and directed by Iain Forsyth and Jane Pollard. Nick Cave also co-wrote the script with Forsyth and Pollard. The film premiered in-competition in the World Cinema Documentary Competition at 2014 Sundance Film Festival on 20 January 2014. It won two Awards at the festival.

List of the published work of Luke Davies, Australian writer.

The 17th British Independent Film Awards were held on 7 December 2014 in London. The awards honoured the best British independent films of 2014.

"Joan of Arc" is a song recorded by American singer and songwriter Madonna from her thirteenth studio album Rebel Heart (2015). It was written by Madonna, Toby Gad, Maureen McDonald and Larry Griffin Jr., with production being done by Madonna, Gad, AFSHeeN and Josh Cumbee. The song's demo was leaked onto the internet on December 17, 2014, with twelve other tracks from the album. Its final version was released on February 9, 2015 with two other tracks on the iTunes store. "Joan of Arc" is the eighth track on Rebel Heart and has similarity to the demo version, but with a lift in its tempo during the chorus. It is a guitar-led pop and electro-folk ballad, with drums and guitars being added as the song's instrumentation.