The American Cancer Society (ACS) is a nationwide voluntary health organization dedicated to eliminating cancer. Established in 1913, the society is organized into six geographical regions of both medical and lay volunteers operating in more than 250 Regional offices throughout the United States. [2] Its global headquarters is located in the American Cancer Society Center in Atlanta, Georgia. The ACS publishes the journals Cancer , CA: A Cancer Journal for Clinicians and Cancer Cytopathology . [4]

At the time of founding, it was not considered appropriate to mention the word "cancer" in public. Information concerning this illness was cloaked in a climate of fear and denial. Over 75,000 people died each year of cancer in just the United States. The top item on the founders' agenda was to raise awareness of cancer, before any other progress could be made in funding research. Therefore, a frenetic writing campaign was undertaken to educate doctors, nurses, patients and family members about cancer. Articles were written for popular magazines and professional journals. The ASCC undertook to publish their own journal, Campaign Notes, a monthly bulletin with information about cancer. They began recruiting doctors from all over the United States to help educate the public about cancer.

In 1936, Marjorie Illig, an ASCC field representative, suggested the creation of a network consisting of new volunteers for the purpose of waging "war on cancer". From 1935 to 1938 the number of people involved in cancer control in the US grew from 15,000 to 150,000. According to Working to Give, the Women's Field Army, a group of volunteers working for the ASCC, was primarily responsible for this increase. [8]

The sword symbol, adopted by the American Cancer Society in 1928, was designed by George E. Durant of Brooklyn, New York. According to Durant, the two serpents forming the handle represent the scientific and medical focus of the society's mission, and the blade expresses the "crusading spirit of the cancer control movement". [9]

In 2012 the American Cancer Society raised $934 million and spent $943 million prompting a national consolidation and cost-cutting reorganization in 2013. [10] It centralized its operations and consolidated, merging previous regional affiliates into the parent organization. It also required all employees to reapply for their jobs. [10] [11]

In February 2021, Tennessee-based advertising agency Tombras Group was named the Society's agency of record. [12] Karen E. Knudsen, MBA, PhD, was named the chief executive officer in 2021. She is the first woman to lead the organization as CEO. [13] </ref>

The ACS' activities include providing grants to researchers, including funding 49 Nobel Laureate researchers; discovering the link between smoking and cancer; and serving one million callers every year through its National Cancer Information Center. The Nobel Prize laureates include James D. Watson, Mario Capecchi, Oliver Smithies, Paul Berg, E. Donnall Thomas, and Walter Gilbert. [14] The American Cancer Society's website contained a chronological listing of specific accomplishments in the fight against cancer in which the ACS had a hand, including the funding of various scientists who went on to discover life-saving cancer treatments, and advocating for increased use of preventative techniques. [15]

The organization also runs public health advertising campaigns, and organizes projects such as the Relay For Life and the Great American Smokeout. It operates a series of thrift stores to raise money for its operations. The ACS participates in the Hopkins 4K for Cancer, a 4000-mile bike ride from Baltimore to San Francisco to raise money for the society's Hope Lodge. [16] [17]

The ACS continues to sponsor many pledge-based activities such as the American Cancer Society Pennsylvania Perimeter Ride Against Cancer. [22]

In 1994, the Chronicle of Philanthropy , a nonprofit industry publication, released the results of the largest study of charitable and non-profit organization popularity and credibility, conducted by Nye Lavalle & Associates. The study showed that the American Cancer Society was ranked as the 10th "most popular charity/non-profit in America" of over 100 charities researched, with 38% of Americans over the age of 12 choosing "love" and "like a lot" for the ACS. [8] [23] [24]

The Better Business Bureau lists American Cancer Society as an accredited charity meeting all of its Standards for Charity Accountability as of January 2012 [update] . [19]

In 1995, the Arizona chapter of the American Cancer Society was targeted for its extremely high overhead. Two economists, James Bennett and Thomas DiLorenzo, issued a report analyzing the chapter's financial statements and demonstrating that the Arizona chapter used about 95% of its donations for paying salaries and other overhead costs, resulting in a 22 to 1 ratio of overhead to actual money spent on the cause. The report also asserted that the Arizona chapter's annual report had grossly misrepresented the amount of money spent on patient services, inflating it by more than a factor of 10. The American Cancer Society responded by alleging that the economists issuing the report were working for a group funded by the tobacco industry. [25]

The American Cancer Society was criticized in 2011 for turning down participation from the Foundation Beyond Belief in its Relay For Life "National Team" program. [28] [29]

The Charity Navigator gave the American Cancer Society a 3-star overall rating, a 2-star financial rating and a 4-star accountability and transparency rating. [30] 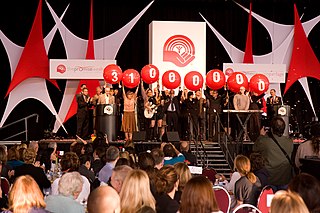 United Way is an international network of over 1,800 local nonprofit fundraising affiliates. Membership to United Way and use of the United Way brand is overseen by the United Way Worldwide umbrella organization.

The Great American Smokeout is an annual intervention event on the third Thursday of November by the American Cancer Society. Approximately 40 million American adults still smoke, and tobacco use remains the single largest preventable cause of disease and premature death in the country. The event challenges people to quit on that day, or use the day to make a plan to quit.

Relay For Life is a community-based fundraising event for the American Cancer Society and many other Cancer related institutions, societies and associations. Each year, more than 5,000 Relay For Life events take place in over twenty countries. Events are held in local communities, university campuses and in virtual campaigns. As the American Cancer Society's most successful fundraiser and the organization's signature event, the mission of Relay For Life is to raise funds to improve cancer survival, decrease the incidence of cancer, and improve the quality of life for cancer patients and their caretakers.

The American Constitution Society (ACS) is a progressive legal organization. The group's stated mission is to "promote the vitality of the U.S. Constitution and the fundamental values it expresses: individual rights and liberties, genuine equality, access to justice, democracy and the rule of law."

Susan G. Komen, formerly known as Susan G. Komen for the Cure and originally as The Susan G. Komen Breast Cancer Foundation, often referred to as simply Komen, is the largest and best-funded breast cancer organization in the United States.

Movember is an annual event involving the growing of moustaches during the month of November to raise awareness of men's health issues, such as prostate cancer, testicular cancer, and men's suicide. The Movember Foundation runs the Movember charity event, housed at Movember.com. The goal of Movember is to "change the face of men's health."

A giving circle is a form of participatory philanthropy where groups of individuals donate their own money or time to a pooled fund, decide together where to give these away to charity or community projects and, in doing so, seek to increase their awareness of and engagement in the issues covered by the charity or community project. Many circles, in addition to donating their money, also contribute their time and skills to support local causes. 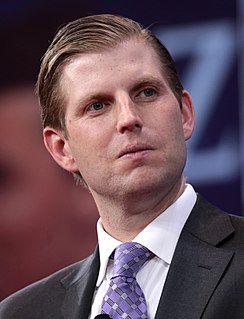 Eric Frederick Trump is an American businessman, philanthropist, activist, and former reality television presenter. He is the third child and second son of the 45th president of the United States, Donald Trump, and his first wife, Ivana Trump.

Cause marketing is marketing done by a for-profit business that seeks to both increase profits and to better society in accordance with corporate social responsibility, such as by including activist messages in advertising.

GiveWell is an American non-profit charity assessment and effective altruism-focused organization. GiveWell focuses primarily on the cost-effectiveness of the organizations that it evaluates, rather than traditional metrics such as the percentage of the organization's budget that is spent on overhead.

Candid is an information service specializing in reporting on U.S. nonprofit companies. In 2016, its database provided information on 2.5 million organizations. In February 2019, GuideStar merged with Foundation Center to become Candid.

Philanthropy has played a major role in American history, from the Puritans of early Massachusetts who founded Harvard College, down to the present day. Since the late 19th century philanthropy has been a major source of income for religion, medicine and health care, fine arts and performing arts, as well as educational institutions.

Donors Trust is an American non-profit donor-advised fund. It was founded in 1999 with the goal of "safeguarding the intent of libertarian and conservative donors". As a donor advised fund, Donors Trust is not legally required to disclose the identity of its donors, and most of its donors remain anonymous. It distributes funds to various conservative and libertarian organizations, and has been characterized as the "dark money ATM" of the right.

The Reynolds cancer charities refer to the four "sham charities": the Cancer Fund of America, Inc. (CFA), Cancer Support Services Inc. (CSS), Children’s Cancer Fund of America Inc. (CCFOA), and The Breast Cancer Society Inc. (BCS) that began operations in 1984 and were shut down in 2016. They were run by James T. Reynolds, James Reynold II, Kyle Effler, Rose Perkins, Kristina Reynolds and other Reynolds family members and friends. The Federal Trade Commission (FTC) described the Reynolds cancer charities as "one of the largest charity fraud cases ever". They were listed as among America's worst charities, based on high management costs, high salaries to directors, and low (1%–2.5%) proportion of income disbursed to beneficiaries. The investigation of the Reynolds' sham charities, initiated by the FTC and all fifty states plus the District of Columbia, resulted in "one of the largest actions brought to date [2015] by enforcers against charity fraud." The May 2015 historic civil suit, alleged that CFA, CSS, CCFOA, and BCS had collected more than $187 million in donations from consumers and that an "overwhelming majority" of the money went to "the perpetrators, their families and friends", and for-profit fundraisers contracted by the charities. Reynolds' and associates contracted about ten of these for-profit solicitors who "earned more than 80 cents of every dollar donated" [to CFA] for a total of $80.4 million."

Charity assessment is the process of analysis of the goodness of a non-profit organization in financial terms. Historically, charity evaluators have focused on the question of how much of contributed funds are used for the purpose(s) claimed by the charity, while more recently some evaluators have placed an emphasis on the cost effectiveness of charities.