Andrew Shaw Goudie (born 21 August 1945, in Cheltenham) is a geographer at the University of Oxford specialising in desert geomorphology, dust storms, weathering, and climatic change in the tropics. He is also known for his teaching and best-selling textbooks on human impacts on the environment. He is the author, co-author, editor, or co-editor of forty-one books (many of which have appeared in numerous editions) and more than two hundred papers published in learned journals. He combines research and some teaching with administrative roles.

Andrew Goudie was at the School of Geography and the Environment, University of Oxford [1] from 1970 to 2003. He was appointed Fellow of Hertford College in 1976, was Professor of Geography in 1984 and was Head of the School of Geography from 1984 until 1994. From 1995 until 1997, he was President of the Oxford Development Programme and Pro-Vice-Chancellor of the university. He was Master of St Cross College, Oxford. [2] from 2003 to 2011. He has been an Honorary Secretary and Vice President of the Royal Geographical Society, Executive Secretary and Chairman of the British Geomorphical Research Group, a member of the Council of the Institute of British Geographers, and President of the Geographical Association. He has also been President of the International Association of Geomorphologists.

In 1970, Goudie was elected a Member of the Institute of British Geographers (of which he was later a member of Council) and a Fellow of the Royal Geographical Society. He was Honorary Secretary of the Royal Geographical Society from 1980 until 1988 and has been a Vice-President of the Society. He has been President of the Geographical Association and of the International Association of Geomorphologists and has served as a Delegate to Oxford University Press.

Goudie was educated at Dean Close School and Trinity Hall, Cambridge (BA first class with distinction 1967, MA, PhD 1972). In 2002 he was awarded the degree of Doctor of Science by the University of Oxford. 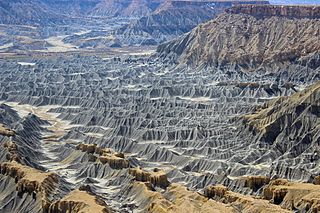 Geomorphology is the scientific study of the origin and evolution of topographic and bathymetric features created by physical, chemical or biological processes operating at or near Earth's surface. Geomorphologists seek to understand why landscapes look the way they do, to understand landform and terrain history and dynamics and to predict changes through a combination of field observations, physical experiments and numerical modeling. Geomorphologists work within disciplines such as physical geography, geology, geodesy, engineering geology, archaeology, climatology, and geotechnical engineering. This broad base of interests contributes to many research styles and interests within the field.

Nick Middleton is a British physical geographer and supernumerary fellow of St Anne's College, Oxford. He specialises in desertification.

David S. G. Thomas is a British scientist and geographer. He was born at his parents' home in River, near Dover, Kent, UK, in October 1958. He is Professor of geography at the University of Oxford, the fifth person to hold the Statuary Chair, and a Professorial Fellow of Hertford College, Oxford.

Sturt Stony Desert is an area in the north-east of South Australia, far south western border area of Queensland and the far west of New South Wales.

Sir Ronald Urwick Cooke, FRGS DL is a Professor of geography and geomorphology who was Vice-Chancellor of the University of York from 1993 to 2002.

Noel Castree FAcSS is a British geographer whose research has focused on capitalism-environment relationships and, more recently, on the role that various experts play in discourses about global environmental change. He is currently the editor-in-chief of the peer-reviewed journal Progress in Human Geography.

David Leslie Linton was a British geographer and geomorphologist, was professor of geography at Sheffield and Birmingham, best remembered for his work on the landscape development of south-east England with S. W. Wooldridge, and on the development of tors.

Marjorie Mary Sweeting, was a British geomorphologist specializing in karst phenomena. Sweeting had gained extensive knowledge on various topographies and landscapes, by travelling around the world to places such as Greece, Australia, Czechoslovakia, United States, Canada, South Africa, Belize, and most notably China. She published Karst Landforms, and Karst in China: its Geomorphology and Environment after many years of work there starting in 1977. The latter is the first comprehensive Western account of China's karst, one of the first western published works on the karst found within China, even in a male dominated field.

The British Society for Geomorphology (BSG), incorporating the British Geomorphological Research Group (BGRG), is the professional organisation for British geomorphologists and provides a community and services for those involved in teaching or research in geomorphology, both in the UK and overseas. The society’s journal, Earth Surface Processes and Landforms is published by Wiley-Blackwell and online access is available free to members. The society is affiliated with the Royal Geographical Society as an affiliated research group and with the Geological Society of London as a specialist group. 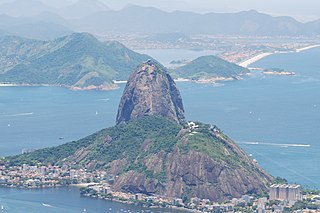 A bornhardt is a dome-shaped, steep-sided, bald rock outcropping at least 30 metres (100 ft) in height and several hundred metres in width. They are named after Wilhelm Bornhardt (1864–1946), a German geologist and explorer of German East Africa, who first described the feature.

A blockfield, felsenmeer, boulder field or stone field is a surface covered by boulder- or block-sized angular rocks usually associated with alpine and subpolar climates and periglaciation. Blockfields differ from screes and talus slope in that blockfields do not apparently originate from mass wastings. They are believed to be formed by frost weathering below the surface. An alternative theory that modern blockfields may have originated from chemical weathering that occurred in the Neogene when the climate was relatively warmer. Following this thought the blockfields would then have been reworked by periglacial action.

Andrew Warren is a British physical geographer. He is Emeritus Professor of Geography at University College London, UK. 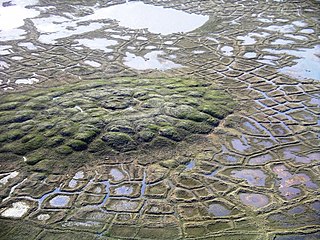 Periglaciation describes geomorphic processes that result from seasonal thawing of snow in areas of permafrost, the runoff from which refreezes in ice wedges and other structures. "Periglacial" suggests an environment located on the margin of past glaciers. However, freeze and thaw cycles influence landscapes outside areas of past glaciation. Therefore, periglacial environments are anywhere that freezing and thawing modify the landscape in a significant manner.

Paul A. Shaw is a physical geographer and a Fellow of the Royal Geographical Society.

Eiju Yatsu was a Japanese geomorphologist who taught in Japan, US and Canada. He is best known for his contributions to weathering and 'rock control' in geomorphology.

Rita Ann Moden Gardner, is a British geographer and academic, specialising in geomorphology. Since January 2019, she has been Chief Executive of the Academy of Social Sciences. She taught at St Catherine's College, Oxford (1978–1979), King's College, London (1979–1994), and finally at Queen Mary and Westfield College (1994–1996) where she was Reader in Environmental Science. From 1996 to 2018, she was Director of the Royal Geographical Society: she was the learned society's first female director.

Heather Viles is a Professor of Biogeomorphology and Heritage Conservation in the School of Geography and the Environment at Oxford University, Senior Fellow at Worcester College, and Honorary Professor at the Institute of Sustainable Heritage, University College London. She is a Fellow of the British Society for Geomorphology.