A fellow is a broad concept whose exact meaning depends on context. In learned or professional societies, it refers to a privileged member who is specially elected in recognition of their work and achievements. [1] [2] Within the context of higher educational institutions, a fellow can be a member of a highly-ranked group of teachers at a particular college or university or a member of the governing body in some universities (such as the Fellows of Harvard College); it can also be a specially selected postgraduate student who has been appointed to a post (called a fellowship) granting a stipend, research facilities and other privileges for a fixed period (usually one year or more) in order to undertake some advanced study or research, often in return for teaching services. [1] [2] In the context of research and development-intensive large companies or corporations, the title "fellow" is sometimes given to a small number of senior scientists and engineers. In the context of medical education in North America, a fellow is a physician who is undergoing a supervised, sub-specialty medical training (fellowship) after having completed a specialty training program (residency).

In education and academia there are several kinds of fellowships, awarded for different reasons.

The term teaching fellow or teaching assistant is used, in the United States and United Kingdom, in secondary school, high school and middle school setting for students or adults that assist a teacher with one or more classes. [3]

In US medical institutions, a fellow refers to someone who has completed residency training (e.g. in internal medicine, pediatrics, general surgery, etc.) and is currently in a 1 to 3 year subspecialty training program (e.g. cardiology, pediatric nephrology, transplant surgery, etc.).

As an academic position

The title of research fellow may be used to denote an academic position at a university or a similar institution; it is roughly equivalent to the title of lecturer in the teaching career pathway.[ citation needed ]

As a financial grant

In the context of graduate school in the United States and Canada, a fellow is a recipient of a postgraduate fellowship. Examples include the NSF Graduate Research Fellowship, the DoD National Defense Science and Engineering Graduate Fellowship , the Guggenheim Fellowship, the Rosenthal Fellowship, Woodrow Wilson Teaching Fellowship and the Presidential Management Fellowship. It is granted to prospective or current students, on the basis of their academic or research achievements.

Fellowships as a training program

Fellowships may involve a short placement for capacity building, [12] [13] e.g., to get more experience in government, such as the American Association for the Advancement of Science's fellowships [14] and the American Academy of Arts and Sciences Fellowship programs. Some institutions offer fellowships as a professional training program as well as a financial grant, such as the Balsillie School of International Affairs, where tuition and other fees are paid by the fellowship.

Fellowships as a special membership grade

Fellows are often the highest grade of membership of many professional associations or learned societies, for example, the Chartered Institute of Arbitrators or Royal College of Surgeons. Lower grades are referred to as members (who typically share voting rights with the fellows), or associates (who may or may not, depending on whether "associate" status is a form of full membership). Additional grades of membership exist in, for example, the IEEE and the ACM.

How a fellowship is awarded varies for each society, but may typically involve some or all of these:

At the ancient universities of the University of Oxford, the University of Cambridge, and Trinity College, Dublin, members of the teaching staff typically have two affiliations: one as a reader, lecturer, or other academic rank within a department of the university, as at other universities, and a second affiliation as a fellow of one of the colleges of the university. The fellows, sometimes referred to as university dons, form the governing body of the college. They may elect a council to handle day-to-day management. All fellows are entitled to certain privileges within their colleges, which may include dining at High Table (free of charge) and possibly the right to a room in college (free of charge).[ citation needed ]

At Cambridge, retired academics may remain fellows[ citation needed ]. At Oxford, however, a Governing Body fellow would normally be elected a fellow emeritus and would leave the Governing Body upon his or her retirement.[ citation needed ] Distinguished old members of the college, or its benefactors and friends, might also be elected 'Honorary Fellow', normally for life; but beyond limited dining rights this is merely an honour. Most Oxford colleges have 'Fellows by Special Election' or 'Supernumerary Fellows', who may be members of the teaching staff, but not necessarily members of the Governing Body.

Some senior administrators of a college such as bursars are made fellows, and thereby become members of the governing body, because of their importance to the running of a college[ citation needed ].

At Harvard University and some other universities in the United States, "fellows" are members of the Board of Trustees who hold administrative positions as non-executive trustee rather than academics.[ citation needed ]

In industries intensive in science, medicine, and research & development, companies may appoint a very small number of top senior researchers as corporate, technical or industry fellows, either in Science or in Engineering. These are internationally recognized leaders who are among the best in the world in their respective fields. [15] [16] [17]

Corporate, Technical or Industry Fellow in either Science or Engineering is the most senior rank or title one can achieve in a scientific or engineering career, though fellows often also hold business titles such as Vice President [18] [19] or Chief Technology Officer. [20] [21]

Notable examples of fellows in scientific, medical and other research-intensive organizations include:

The title fellow can be used for participants in a professional development program run by a nonprofit or governmental organization. This type of fellowship is a short term work opportunity (1–2 years) [36] for professionals who already possess some level of academic or professional expertise that will serve the nonprofit mission. Fellows are given a stipend as well as professional experience and leadership training.

Massey College is a graduate residential college at the University of Toronto that was established, built and partially endowed in 1962 by the Massey Foundation and officially opened in 1963. It was modeled around the traditional Cambridge and Oxford collegiate system and features a central court and porters lodge. Similar to St. John's College, Cambridge, and All Souls College, Oxford, senior and junior fellows of Massey College are nominated from the university community and occasionally the wider community, and are elected by the governing board of the college. The President of the University of Toronto, the Dean of graduate studies and three members of the Massey Foundation are ex officio members of the governing board, chaired by the elected member of the governing board. Members of the governing board are elected for five years; the Principal of the college is elected for seven years.

The American Society for Engineering Education (ASEE) is a non-profit member association, founded in 1893, dedicated to promoting and improving engineering and engineering technology education. The purpose of ASEE is the advancement of education in all of its functions which pertain to engineering and allied branches of science and technology, including the processes of teaching and learning, counseling, research, extension services and public relations.

Geraint Ellis Rees FMedSci is Dean of the UCL Faculty of Life Sciences, UCL Pro-Provost, UCL Pro-Vice-Provost (AI) and a Professor of Cognitive Neurology at University College London. He is also a Director of UCL Business and a trustee of the charities the Guarantors of Brain and in2science

Anne Cooke, is a British biologist and academic, specialising in immunology and autoimmune diseases. From 2000 to 2013, she was Professor of Immunobiology at the University of Cambridge. She was a Fellow of King’s College, Cambridge between 1992 and 2013.

Jean Duthie Beggs CBE FRS FRSE DSc is a Scottish geneticist. She is the Royal Society Darwin Trust Professor in the Wellcome Trust Centre for Cell Biology at the University of Edinburgh.

The Newton International Fellowship, named after Sir Isaac Newton, is an international postdoctoral award for selected foreign academics to carry out research at institutions in the United Kingdom.

Manchanahalli Rangaswamy Satyanarayana Rao known by the abbreviation M. R. S. Rao, is an Indian scientist, born on 21 January 1948 at Mysore, India. He has been awarded the fourth highest civilian award Padma Shri in Science and Engineering category by the Government of India. He was the President of Jawaharlal Nehru Centre for Advanced Scientific Research (JNCASR), Bangalore, India (2003-2013)

Michael J. Shelley is an American applied mathematician who works on the modeling and simulation of complex systems arising in physics and biology. This has included free-boundary problems in fluids and materials science, singularity formation in partial differential equations, modeling visual perception in the primary visual cortex, dynamics of complex and active fluids, cellular biophysics, and fluid-structure interaction problems such as the flapping of flags, stream-lining in nature, and flapping flight. He is also the co-founder and co-director of the Courant Institute's Applied Mathematics Lab. 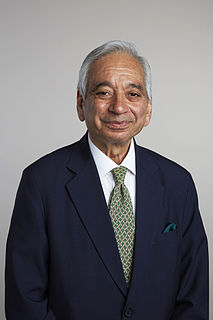 Kamaljit Singh Bawa, FRS is an evolutionary ecologist, conservation biologist and a distinguished professor of Biology at the University of Massachusetts, Boston. He is also the founder of Ashoka Trust for Research in Ecology and Environment (ATREE). In 2012, Bawa received the first Gunnerus Sustainability Award, the world's major international award for work on sustainability. He is an elected member of the American Academy of Arts and Sciences. He was elected a Member of the American Philosophical Society in 2019.

Lai-Sheng Wang is an experimental physical chemist currently teaching at Brown University. Wang is known for his work on atomic gold pyramids and planar boron clusters.

David Chaim Rubinsztein FRS FMedSci is the Deputy Director of the Cambridge Institute of Medical Research (CIMR), the Academic Lead of the Alzheimer's Research UK (ARUK) Cambridge Drug Discovery Institute, Professor of Molecular Neurogenetics at the University of Cambridge. and a UK Dementia Research Institute Professor.

Tara Keck is an American-British neuroscientist and Professor of Neuroscience and Wellcome Trust Senior Research Fellow, at University College London working in the Department of Neuroscience, Physiology, and Pharmacology. She studies experience-dependent synaptic plasticity, its effect on behaviour and how it changes during ageing and age-related diseases. She has worked in collaboration with the United Nations Population Fund on approaches for healthy ageing.

Athena Safa Sefat, born 1977 in Iran is a Canadian/American physicist, with research focus on quantum materials and correlated phenomena. She was a senior scientist at Oak Ridge National Laboratory and led the DOE Basic Energy Science on "Probing Competing Chemical, Electronic, and Spin Correlations for Quantum Materials Functionality". She is currently a Program Manager at U.S. Department of Energy (DOE), Office of Science, Basic Energy Sciences, with Division of Materials Sciences and Engineering.

Judith S. Eisen is an American neuroscientist and professor of biology at the University of Oregon. Eisen conducts fundamental research in the specification and patterning of the vertebrate nervous system with a focus on developmental interactions between the nervous system, immune system, and host-associated microbiota. Eisen is a member of the Institute of Neuroscience at the University of Oregon.