Last updated June 04, 2022
Name given to an enslaved person

A slave name is the personal name given by others to an enslaved person, or a name inherited from enslaved ancestors. The modern use of the term applies mostly to African Americans and West Indians who are descended from enslaved Africans who retain their name given to their ancestors by the enslavers.

In Rome, slaves were given a single name by their owner. A slave who was freed might keep his or her slave name and adopt the former owner's name as a praenomen and nomen. As an example, one historian says that "a man named Publius Larcius freed a male slave named Nicia, who was then called Publius Larcius Nicia." [2]

Historian Harold Whetstone Johnston writes of instances in which a slave's former owner chose to ignore custom and simply chose a name for the freedman. [3]

A number of African-Americans and Afro-Caribbeans have changed their names out of the belief that the names they were given at birth were slave names. An individual's name change often coincides with a religious conversion (Muhammad Ali changed his name from Cassius Clay, Malcolm X from Malcolm Little, and Louis Farrakhan changed his from Louis Eugene Walcott, for example) [4] [5] or involvement with the black nationalist movement, in this later case usually adopting names of African origin (e.g., Amiri Baraka and Assata Shakur). [6]

Some organizations encourage African-Americans to abandon their slave names. The Nation of Islam is perhaps the best-known of them. In his 1965 book, Message to the Blackman in America , Nation of Islam leader Elijah Muhammad writes often of slave names. Some of his comments include:

The black nationalist US Organization also advocates for African-Americans to change their slave names and adopt African names. [9]

Irish singer Sinéad O'Connor stated in 2017 that she had changed her legal name to Magda Davitt, saying in an interview that she wished to be "free of the patriarchal slave names." [10] On her conversion to Islam in 2018, she adopted the Muslim name Shuhada' Sadaqat. [11] 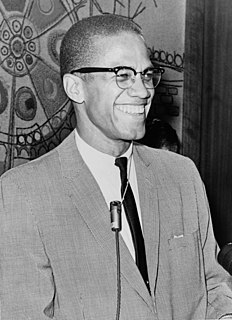 Malcolm X was an African-American Muslim minister and human rights activist who was a prominent figure during the civil rights movement. A spokesman for the Nation of Islam until 1964, he was a vocal advocate for black empowerment and the promotion of Islam within the black community. A posthumous autobiography, on which he collaborated with Alex Haley, was published in 1965.

The Nation of Islam (NOI) is a religious and political organization founded in the United States by Wallace Fard Muhammad in 1930. A black nationalist organization, the NOI focuses its attention on the African diaspora, especially on African Americans. While it identifies itself as promoting a form of Islam, its beliefs differ considerably from mainstream Islamic traditions. Scholars of religion characterise it as a new religious movement. It operates as a centralized and hierarchical organization. Its critics, including the Southern Poverty Law Center and the Anti-Defamation League, have accused it of being a black supremacist hate group that promotes racial prejudice towards white people, anti-semitism, and anti-LGBT rhetoric. Muslim critics accuse it of promoting teachings that are not authentically Islamic. 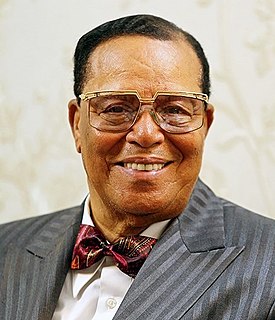 Louis Farrakhan is an American religious leader, black supremacist, anti-white conspiracy theorist, and former singer who heads the Nation of Islam (NOI). Prior to joining the NOI, he was a calypso music singer who went by the stage name Calypso Gene. Earlier in his career, he served as the minister of mosques in Boston and Harlem and was appointed National Representative of the Nation of Islam by former NOI leader Elijah Muhammad. He adopted the name Louis X, before being named Louis Farrakhan.

A number of organizations and academics consider the Nation of Islam to be antisemitic, stating that it has engaged in Holocaust denial and antisemitic interpretations of the Holocaust, and exaggerates the role of Jews in the African slave trade, whereas mainstream historians, such as Saul S. Friedman, have said Jews had a negligible role. The Nation of Islam has repeatedly rejected charges made against it as false and politically motivated.

Elijah Muhammad was an American religious leader, black separatist, and self-proclaimed Messenger of Allah, who led the Nation of Islam (NOI) from 1934 until his death in 1975. Muhammad was also the teacher and mentor of Malcolm X, Louis Farrakhan, Muhammad Ali, and his own son, Warith Deen Mohammed. 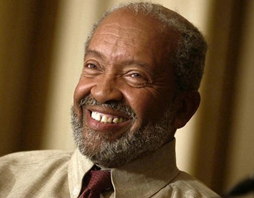 Warith Deen Mohammed, also known as W. Deen Mohammed, Imam W. Deen Muhammad and Imam Warith Deen, was an African-American Muslim leader, theologian, philosopher, Muslim revivalist, and Islamic thinker (1975–2008) who disbanded the original Nation of Islam (NOI) in 1976 and transformed it into an ostensibly orthodox mainstream Islamic movement, the Bilalians (1975), World Community of Al-Islam in the West (1976–77), American Muslim Mission (1978–85,) which later became the American Society of Muslims. He was a son of Elijah Muhammad, the leader of the Nation of Islam from 1933 to 1975. 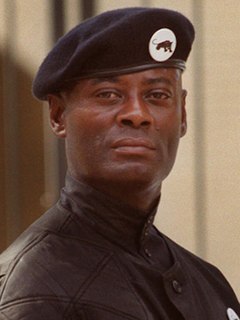 Khalid Abdul Muhammad was an African-American Muslim minister and activist who became a prominent figure in the Nation of Islam and later the New Black Panther Party. After a racially inflammatory 1993 speech at Kean College, Muhammad was condemned and removed from his position in the Nation of Islam by Louis Farrakhan. He was also censured by both Houses of the United States Congress.

In the beliefs of the Nation of Islam (NOI), Yakub was a black scientist who lived 6,600 years ago and began the creation of the white race/whites. He is said to have done this through a form of selective breeding which is referred to as "grafting", while he was living on the island of Patmos. The Nation of Islam's theology states that Yakub is the biblical Jacob. 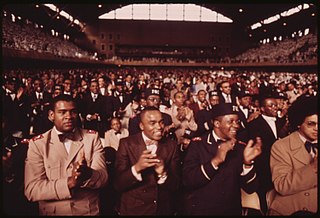 Saviours' Day is a holiday of the Nation of Islam commemorating the birth of its founder, Master Wallace Fard Muhammad, officially stated to be February 26, 1877. It was established by Elijah Muhammad.

Muhammad Speaks was one of the most widely read newspapers ever produced by an African-American organization. It was the official newspaper of the Nation of Islam from 1960 to 1975, founded by a group of Elijah Muhammad's ministers, including Malcolm X. After Elijah Muhammad's death in 1975, it was renamed several times after Warith Deen Mohammed moved the Nation of Islam into mainstream Sunni Islam, culminating in The Muslim Journal. A number of rival journals were also published, including The Final Call under Louis Farrakhan, claiming to continue the message of the original.

This article is about the beliefs and theology of the Nation of Islam.

The Tribe of Shabazz was, according to the Nation of Islam, a supposed ancient black nation that migrated into central Africa, led by a leader named Shabazz. The concept is found primarily in the writings of Wallace Fard Muhammad and Elijah Muhammad. According to the Autobiography of Malcolm X, all the races except the white race were descendants of the Tribe of Shabazz.

Shabazz is the name of a black architect whose tribe founded the populations of Africa according to the doctrine of the Nation of Islam (NOI). It is similar to the Persian name Shahbaz.

Ava Muhammad is an American Black Muslim. In 1998 she became the first female Minister to preside over a mosque and region in the history of the NOI. Her job as national spokesperson for Minister Farrakhan is among the most prominent in the nation — a post formerly held by Malcolm X under Nation of Islam patriarch Elijah Muhammad. Minister Ava Muhammad is also a member of the Muslim Girls Training (MGT).

Black nationalism is a type of nationalism or pan-nationalism which espouses the belief that black people are a race and it seeks to develop and maintain a Black racial and national identity. Black nationalist activism revolves around the social, political, and economic empowerment of Black communities and people, especially to resist their assimilation into white culture and maintain a distinct Black identity.

Muhammad Ali was initially raised as a Baptist before entering Islam.

Malcolm X, an African American Muslim minister and human rights activist who was a popular figure during the civil rights movement, was assassinated in Manhattan, New York City on February 21, 1965. While preparing to address the Organization of Afro-American Unity at the Audubon Ballroom in the neighborhood of Washington Heights, Malcolm X was shot multiple times and killed. Three members of the Nation of Islam were charged with the murder and given indeterminate life sentences, but in November 2021, two of the men were exonerated.