Arlind Sejdiu (born 11 August 2001) is a Finnish professional footballer who plays for FC Honka, as a forward. [1] He is of Kosovo Albanian descent and originally from Mitrovica, Kosovo. [2]

The Democratic League of Kosovo is one of the three largest political parties in Kosovo, alongside its longtime rival, the Democratic Party of Kosovo, & Vetevendosje.

The politics of Kosovo takes place in a framework of a multi-party parliamentary representative democratic republic, whereby the President (Presidenti) is the head of state and the Prime Minister (Kryeministri) the head of government. Parliamentary elections are held every four years, the most recent in 2019.

Fatmir Sejdiulisten (help·info) is a Kosovar politician. He was the leader of the Democratic League of Kosovo (LDK) and was the first President of Kosovo.

Anton Çeta was a Roman Catholic ethnic Albanian folklorist, academic and university professor from Yugoslavia. He was born in Đakovica, completed elementary school in his hometown and secondary school in Tirana and Korça, Albania. He graduated in Romance languages and culture at the University of Belgrade Faculty of Philosophy. For a period of time he worked as assistant professor at the department of Albanian Studies in Belgrade. From 1960 to 1968 he lectured on Old Albanian Literature, The History of Literature, and Latin language at the University of Pristina.

Klubi i futbollit Vëllaznimi, commonly known as KF Vëllaznimi, or simply as Vëllaznimi is a football club based in Gjakova, Kosovo. They currently play in the second division of football in Kosovo, First Football League of Kosovo.

Klubi Futbollistik Trepça '89, commonly known as Trepça '89, is a professional football club based in Mitrovica, Kosovo. The club plays in the Football Superleague of Kosovo, which is the top tier of football in the country. 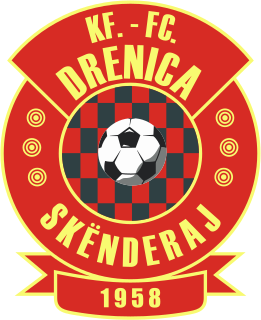 KF Drenica, commonly known as Drenica is a professional football club based in Skenderaj, Kosovo. The club plays in the Football Superleague of Kosovo, which is the top tier of football in the country.

The Cathedral of Saint Mother Teresa in Pristina is a Roman Catholic cathedral being constructed in Pristina, Kosovo. In 2007, the Government of Kosovo approved plans for the building. The cathedral is dedicated to the Albanian-Indian Roman Catholic nun and missionary, Saint Teresa of Calcutta.

Football Club Ballkani, commonly known as Ballkani, is a professional football club based in Suharekë, Kosovo. The club play in the Football Superleague of Kosovo, which is the top tier of football in the country.

Isa Mustafa is a Kosovar politician who is the leader of the Democratic League of Kosovo (LDK). Mustafa was Mayor of Pristina from December 2007 to December 2013 and served as Prime Minister of Kosovo between December 2014 and September 2017. 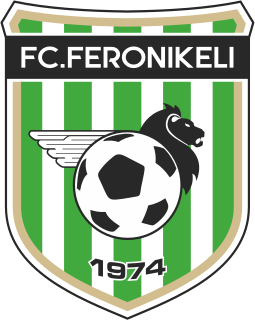 KF Feronikeli, commonly known as Feronikeli is a professional football club based in Drenas, Kosovo. The club play in the Football Superleague of Kosovo, which is the top tier of football in the country.

Sejdiu is an Albanian surname. Notable people with the surname include:

Dardan Sejdiu is a Kosovo Albanian politician. He served as the leader of the parliamentary group of Social Democratic Party of Kosovo in the Assembly of the Republic of Kosovo. He also served as Deputy Mayor of Prishtina as a member of the capital of the Kosovo between 2014 and 2017, being a member of Vetëvendosje at the time. Previously, he has been engaged for four years as President of the Management Board of the Slovenian-Kosovo Pension with a key role in managing this fund for the whole of Kosovo. Sejdiu was a member of Vetevendosje from 2011 to 2018.

The Group of the Independent Deputies(Albanian: Grupi i Deputetëve të Pavarur) also known as GDP were a parliamentary group in the Assembly of the Republic of Kosovo made up of former members of the Vetëvendosje movement (LV). Dardan Sejdiu was the head of the parliamentary group.