The commander in chief on the formation of the Army Group Centre (22 June 1941) was Fedor von Bock.

Order of battle at formation

On 22 June 1941, Nazi Germany and its Axis allies launched their surprise offensive into the Soviet Union. Their armies, totaling over three million men, were to advance in three geographical directions. Army Group Centre's initial strategic goal was to defeat the Soviet armies in Belarus and occupy Smolensk. To accomplish this, the army group planned for a rapid advance using Blitzkrieg operational methods for which purpose it commanded two panzer groups rather than one. A quick and decisive victory over the Soviet Union was expected by mid-November. The Army Group's other operational missions were to support the army groups on its northern and southern flanks, the army group boundary for the later being the Pripyat River.

Bitter fighting in the Battle of Smolensk as well as the Lötzen decision delayed the German advance for two months. The advance of Army Group Centre was further delayed as Hitler ordered a postponement of the offensive against Moscow in order to conquer Ukraine first.

The commander in chief as of 19 December 1941 was Günther von Kluge (for a short time before Christmas of 1941, this role was fulfilled by Günther Blumentritt).

1942 opened for Army Group Centre with continuing attacks from Soviet forces around Rzhev. The German Ninth Army was able to repel these attacks and stabilise its front, despite continuing large-scale partisan activity in its rear areas. Meanwhile, the German strategic focus on the Eastern Front shifted to southwestern Russia, with the launching of Operation Blue in June. This operation, aimed at the oilfields in the southwestern Caucasus, involved Army Group South alone, with the other German army groups giving up troops and equipment for the offensive.

Despite the focus on the south, Army Group Centre continued to see fierce fighting throughout the year. While the Soviet attacks in early 1942 had not driven the Germans back, they had resulted in several Red Army units being trapped behind German lines. Eliminating the pockets took until July, the same month in which the Soviets made another attempt to break through the army group's front; the attempt failed, but the front line was pushed back closer to Rzhev. The largest Soviet operation in the army group's sector that year, Operation Mars, took place in November. It was launched concurrently with Operation Uranus, the counteroffensive against the German assault on Stalingrad. The operation was repulsed with very heavy Soviet losses, although it did have the effect of pinning down German units that could have been sent to the fighting around Stalingrad.

Following the disaster of Stalingrad and poor results of the Voronezh defensive operations, the army high command expected another attack on Army Group Centre in early 1943. However, Hitler had decided to strike first. Before this strike could be launched, Operation Büffel was launched to forestall any possible Soviet spring offensives, by evacuating the Rzhev Salient to shorten the frontline.

The commander in chief as of 12 October 1943 was Ernst Busch.

The following major anti-partisan operations were conducted in the rear of Army Group Centre, alongside many smaller operations:

Increasing coordination of the partisan activity resulted in the conducting of Operation Concert against the German forces.

In the spring of 1944, Stavka started concentrating forces along the front line in central Russia for a summer offensive against Army Group Centre. The Red Army also carried out a masterful deception campaign (Maskirovka) to convince the Wehrmacht that the main Soviet summer offensive would be launched further south, against Army Group North Ukraine. The German High Command was fooled and armored units were moved south out of Army Group Centre.

The offensive, code-named Operation Bagration, was launched on 22 June 1944. 185 Red Army divisions comprising 2.3 million soldiers and 4,000 tanks and assault guns smashed into the German positions on a front of 200 km. The 800,000-strong Army Group Centre was crushed. It is estimated that 400,000 Germans were killed, wounded, or captured, including 57,000 prisoners who were paraded through Moscow on 17 July. The Soviet forces raced forward, liberating Minsk on 3 July, the rest of Belorussia by mid-July, and reaching the Vistula and the Baltic States by early August. In terms of casualties this was the greatest German defeat of the entire war.

The commander in chief of Army Group Centre as of 28 June 1944 was Walter Model.

The commander in chief as of 16 August 1944 was Georg Hans Reinhardt.

Defensive campaign in Poland and Slovakia

Discussion of the army group's situation in January 1945 should note that the army groups in the east changed names later that month. The force known as "Army Group Centre" at the start of the Soviet Vistula-Oder Offensive on 12 January 1945 was renamed "Army Group North" less than two weeks after the offensive commenced. At the start of the Vistula-Oder Offensive, the Soviet forces facing Army Group Centre outnumbered the Germans on average by 2:1 in troops, 3:1 in artillery, and 5.5:1 in tanks and self-propelled artillery. [2] The Soviet superiority in troop strength grows to almost 3:1 if 200,000 Volkssturm militia are not included in German personnel strength totals.

Defence of the Reich campaign

The last Soviet campaign of the war in the European theater, which led to the fall of Berlin and the end of the war in Europe with the surrender of all German forces to the Allies. The three Soviet Fronts involved in the campaign had altogether 2.5 million men, 6,250 tanks, 7,500 aircraft, 41,600 artillery pieces and mortars, 3,255 truck-mounted Katyusha rocket launchers (nicknamed "Stalin Organs" by the Germans), and 95,383 motor vehicles. The campaign started with the battle of Oder-Neisse. Army Group Centre commanded by Ferdinand Schörner (the commander in chief as of 17 January 1945) had a front that included the river Neisse. Before dawn on the morning of 16 April 1945 the 1st Ukrainian Front under the command of General Konev started the attack over the river Neisse with a short but massive bombardment by tens of thousands of artillery pieces.

Some of the Army Group Centre continued to resist until 11 May 1945, by which time the overwhelming force of the Soviet Armies sent to liberate Czechoslovakia in the Prague Offensive gave them no option but to surrender or be killed.

By 7 May 1945, the day that German Chief-of-Staff General Alfred Jodl was negotiating surrender of all German forces at SHAEF, the German Armed Forces High Command (AFHC) had not heard from Schörner since 2 May 1945. He had reported that he intended to fight his way west and surrender his army group to the Americans. On 8 May 1945, a colonel from the Allied Forces High Command was escorted through the American lines to see Schörner. The colonel reported that Schörner had ordered the men under his operational command to observe the surrender but that he could not guarantee that he would be obeyed everywhere. Later that day, Schörner deserted his command and flew to Austria where on 18 May 1945 he was arrested by the Americans.

Ferdinand Schörner was a German army officer and Nazi war criminal. He was a general and later Field Marshal in the Wehrmacht of Nazi Germany during World War II. He commanded several army groups and was the last Commander-in-chief of the German Army. 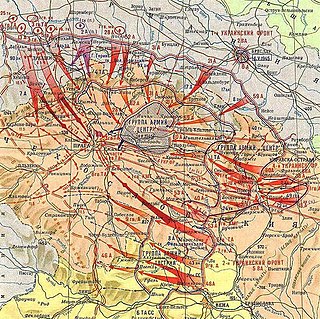 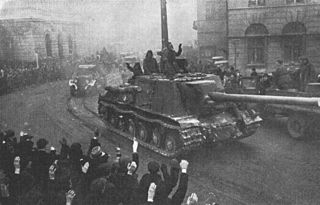 The Vistula–Oder Offensive was a Red Army operation on the Eastern Front in the European theatre of World War II in January 1945. The army made a major advance into German-held territory, capturing Kraków, Warsaw and Poznań. The Red Army had built up their strength around a number of key bridgeheads, with two fronts commanded by Marshal Georgy Zhukov and Marshal Ivan Konev. Against them, the German Army Group A, led by Colonel-General Josef Harpe, was outnumbered 5:1. Within days, German commandants evacuated the concentration camps, sending the prisoners on their death marches to the west, where ethnic Germans also started fleeing. In a little over two weeks, the Red Army had advanced 300 miles (483 km) from the Vistula to the Oder, only 43 miles (69 km) from Berlin, which was undefended. However, Zhukov called a halt, owing to continued German resistance on his northern flank (Pomerania), and the advance on Berlin had to be delayed until April.

The 4th Panzer Division was an armored division in the Army of German Wehrmacht.

The I SS Panzer Corps was a German armoured corps of the Waffen-SS. It saw action on both the Western and Eastern Fronts during World War II. 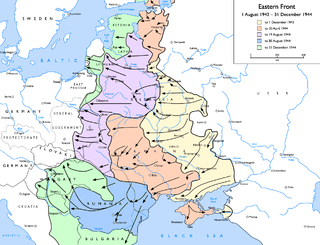 The Second Battle of Târgu Frumos, part of the First Jassy-Kishinev Offensive, was a military engagement primarily between the Wehrmacht and Red Army forces in May 1944, near Iași, Romania.

The 17th Panzer Division was a formation of the Wehrmacht in World War II. It was formed in November 1940 from the 27th Infantry Division. It took part in Operation Barbarossa, the invasion of the Soviet Union in June 1941, and in the winter of 1941–42 participated in the Battle of Moscow. In November 1942, the division was sent to the southern sector of the Eastern Front where it participated in Operation Winter Storm, the failed attempt to relieve the surrounded troops at Stalingrad. The division was held in reserve during the Battle of Kursk in 1943, and thereafter retreated through Ukraine and Poland, before ending the war in Czechoslovakia.

The 3rd Panzer Army was a German armoured formation during World War II, formed from the 3rd Panzer Group on 1 January 1942.

XXXXI Panzer Corps was a Panzer (armoured) corps in the German Army during World War II.

The Upper Silesian Offensive was a strategically significant Soviet offensive on the Eastern Front of World War II in 1945. It was aimed at capturing the considerable industrial and natural resources located in Upper Silesia and involved forces of the 1st Ukrainian Front under Marshal Ivan Konev. Due to the importance of the region to the Germans, considerable forces were provided to Army Group Centre for its defence and the Germans were only slowly pushed back to the Czech border. Fighting for the region lasted from mid January right until the last day of the war in Europe on May 8, 1945.

The Riga Offensive (known in was part of the larger Baltic Offensive on the Eastern Front during World War II. It took place late in 1944, and drove German forces from the city of Riga.

The Nikopol–Krivoi Rog Offensive was an offensive by the Red Army's 3rd Ukrainian Front and elements of the 4th Ukrainian Front against the German 6th Army in the area of Nikopol and Krivoi Rog in Dnipropetrovsk Oblast in central Ukraine between 30 January and 29 February 1944. It took place on the Eastern Front of World War II and was part of the wider Dnieper–Carpathian Offensive, a Soviet attack against Army Group South to retake the rest of Ukraine that fell to Germany in 1941.

The LIII Army Corps was a corps of the German Army during World War II. It was first deployed in 1941 and was active as part of various armies under Army Group Centre until 1944, when it was destroyed during the Soviet Red Army operations Bagration and Kutuzov in June and July 1944. The corps suffered enormous casualties as a result of the Soviet attacks. All of its divisions were destroyed and all but a few of the soldiers were killed or captured by the Soviet Union. A new unit named LIII Army Corps was subsequently deployed in December 1944, when it was assigned to 7th Army and fought on the western front until surrendering to United States Army forces in April 1945.