Avantgarde Music is an Italian record label, formed as a continuation of Obscure Plasma Records, focusing on black and doom metal artists. The label had a sub-label called Wounded Love Records, which has released albums by Dolorian and Taake. [1] A new sub-label, Flowing Downward, [2] had been founded in 2018, specializing in atmospheric black metal bands specifically.

Avantgarde Music's first release was the 1994 funeral doom classic Stream from the Heavens by Thergothon. [3] The label has since signed many well-known black, death and doom metal bands such as Behemoth, Carpathian Forest, Mayhem and Unholy. 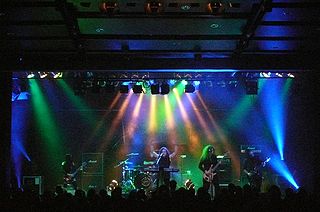 Virgin Black is an Australian gothic doom band. The band was signed to The End Records and Germany's Massacre Records, through which it released 4 albums and 1 EP. A fifth album, originally planned for release in 2006, was released independently in 2018. Formed in 1995 in Adelaide, they have achieved international acclaim during their career, receiving praise from such magazines as Orkus, Metal Hammer, Legacy and The Village Voice.

Evoken is an American funeral doom metal band from Lyndhurst, New Jersey, United States. Evoken is one of the earliest U.S. doom/death metal bands that are still active today, along with Novembers Doom and Rigor Sardonicous. 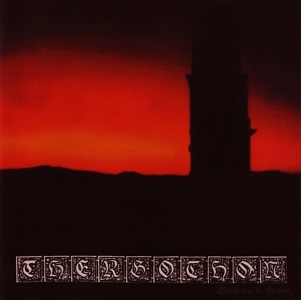 Stream from the Heavens is the only studio album by Finnish doom metal band Thergothon. It was recorded in late 1992 and released after many delays on June 15, 1994 through the Italian record label Avantgarde Music. The band had eventually disbanded a year before the release of the album. Stream from the Heavens continues the funeral doom subgenre that Thergothon pioneered with their 1991 demo Fhtagn nagh Yog-Sothoth. The album was re-issued on CD in 1999 and also in 2004 by Belgian label Painiac as a 12" LP, limited to 500 copies. 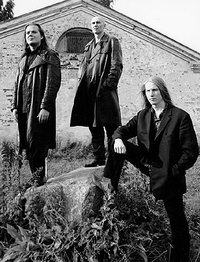 Doom is an EP and the debut release by Arizonan death metal group Job for a Cowboy. It was released in 2005 through the independent Arizona label King of the Monsters, and later reissued in 2006 by Metal Blade Records. The EP is noted for being Job for a Cowboy's only deathcore release, as the band would later abandon the genre in favor for a pure death metal sound proceeding this release. This is the only release to feature guitarist Andrew Arcurio.

Sound Riot Records is an independent record label founded in March 1994 in Brazil. The company started as a small mailorder service for demo-tapes and 7"EPs. In the same year, the CD distribution started and Sound Riot Records became the official distributor for European record labels such as Displeased, Misanthropy, Holy, No Fashion, Cold Meat Industry, Avantgarde Music, and among others.

Desolate North is the debut studio album by the funeral doom metal band Celestiial, first released by Bindrune Recordings on June 6, 2006. It comprises the five tracks from Celestiial's demo, Ashen, combined with three more tracks recorded separately. It was written, performed and recorded entirely by Tanner Anderson, the member of Celestiial, and was never written to be an album or to be performed. The Bindrune CD release is out-of-print, but Desolate North is still available digitally and in LP-format, the latter having been released by music distributor Handmade Birds in 2011.

Death-doom is an extreme subgenre of heavy metal. It combines the slow tempos and pessimistic or depressive mood of doom metal with the deep growling vocals and double kick drumming of death metal. The genre emerged in the late-1980s and gained a certain amount of popularity during the 1990s, but had become less common by the turn of the 21st century. In turn, death-doom gave rise to the closely related genre of funeral doom as well as to the more melodic, gloomy and romantic gothic metal.

Astarte was an all-female black metal band from Athens, Greece, named after the goddess Astarte.

Stijn Van Cauter is a doom metal and ambient music producer from Belgium. He has several solo projects, including Beyond Black Void, I Dream No More, and Fall of the Grey-Winged One. His most notable solo project is Until Death Overtakes Me.

Kauan is an atmospheric doom metal/post-rock band from Chelyabinsk, Russia formed in 2005.

Vials of Wrath are an American Christian metal band, who play a mixture of unblack metal and death metal music, with one member Dempsey "DC" Woodrow Mills Jr. He is from Princeton, West Virginia, however the band was formed in 2011 in Charlotte, NC. The band has released three studio albums, Seeking Refuge in 2013, Days Without Names in 2015, and Dark Winter Memories in 2019. The project have released four extended plays, Vials of Wrath, in 2011, Let There Be Light, in 2013, Ataraxia and The Ways of Old in 2018.