Virdy Megananda (born 6 September 1974), known popularly as Bebi Romeo, is an Indonesian musician. He began his career in the mid-1990s as the vocalist of band Bima. Before their disbandment, the band released their only studio album, Sebuah Awal (1996), which featured single "Dua Hati". Bebi achieved his prominence in music scene after forming band Romeo in 1998. The band's most popular hit "Bunga Terakhir" (1999) was composed by Bebi himself. He has released four studio albums as the vocalist of the band. [1]

Bebi Romeo has regularly written and produced hit songs for many notable Indonesian recording artists, such as Krisdayanti, Ari Lasso, Chrisye, Rita Effendy, Reza Artamevia, and Afgansyah Reza. At the 2000 Anugerah Musik Indonesia, Bebi received the award for Best Record of the Year for "Mencintaimu" (sung by Krisdayanti). [2] In 2012, Bebi wrote "Do You Really Love Me" as a collaboration with American vocal group Boyz II Men. [3] He became one of the judges for the first season of X Factor Indonesia , alongside Anggun, Ahmad Dhani and Rossa. [4]

As the vocalist of Bima

As the vocalist of Romeo

As composer and solo artist

Nidji is a band from Jakarta, Indonesia. Formed on February 1, 2002, Nidji's name comes from the Japanese word "Niji" (虹), meaning "Rainbow". The band's music can be classified under the alternative pop genre, and the band has cited Coldplay and The Killers as major influences. The band currently consists of Yusuf Ubay (vocals/saxophone), Andro Regantoro (bass), Randy Danistha (keyboards/synthesizers), Ramadhista Akbar and Andi Ariel Harsya (guitars), and Adri Prakarsa (drums).

Chrismansyah Rahadi, born Christian Rahadi but better known by his stage name of Chrisye, was an Indonesian progressive pop singer and songwriter. In his 40-year career he won many awards and accolades; in 2011 Rolling Stone Indonesia declared him the third-greatest Indonesian musician of all time.

Aluna Sagita Gutawa, better known as Gita Gutawa, is an Indonesian soprano, actress, and songwriter. She is also the daughter of composer Erwin Gutawa.

Jockie Soerjoprajogo was an Indonesian musician and songwriter. Jockie began his musical career while a junior high school student in Balikpapan, East Kalimantan. After working with bands in Jakarta and Surabaya, in 1973, he joined with Ahmad Albar, Donny Fattah and Ludwig Leeman to form God Bless; he would remain with this band intermittently until the 2000s. Jockie also worked with artists such as Chrisye and Iwan Fals, ultimately writing two songs—"Kehidupan" ("Life") and "Kesaksian" ("Witness")—that were listed by Rolling Stone Indonesia as among the best Indonesian songs of all time.

Ahmad Syech Albar is an Indonesian rock star and founding member of God Bless; in the band he is known as Iyek.

God Bless is an Indonesian rock band founded in 1973 by Ahmad Albar, Jockie Soerjoprajogo, Fuad Hassan, Donny Fattah, and Ludwig Lemans. It continues to be active and has received several awards from the Indonesian music industry.

Prisia Nasution is an Indonesian martial artist, model, and actress.

Dewi Sastaviyana Panduwinata, better known by her stage name Vina Panduwinata, is an Indonesian singer and songwriter. The song "Kumpul Bocah" is cited as her signature song. Her song "Burung Camar" was listed by Rolling Stone Indonesia as the 28th-best Indonesian song of all time.

"Kidung Abadi" is a song written by father and daughter team Erwin and Gita Gutawa for the Kidung Abadi Chrisye concert; the concert was held on 5 April 2012 to commemorate the fifth anniversary of Chrisye's death. The song was created over a period of three months by splicing syllables from previously recorded vocals by Chrisye. At the concert, spliced black-and-white footage of Chrisye was shown lip synching to the song while Erwin's orchestra performed the music. The song was well received: the audience gave it a rowdy ovation, while critics praised its lyrics and described it as one of the best parts of the concert.

During his 40-year career, the Indonesian pop singer Chrisye (1949–2007) released 20 studio albums, 2 tribute or cover albums, 2 soundtrack albums, 10 compilation albums, an indie album, and 56 singles. He also recorded the soundtrack to three feature films, acted in two, and released 26 music videos. In 2008 Rolling Stone Indonesia listed five albums to which Chrisye contributed as among the best Indonesian albums of all time.

X Factor Indonesia is an Indonesian television music competition to find new singing talent; the winner of which receives a 1 billion rupiahs recording contract with Sony Music Indonesia. The first season was started on RCTI on December 28, 2012 and ended on May 24, 2013. Fatin Shidqia was announced as the winner with debut single "Aku Memilih Setia", and Rossa emerged as the winning mentor. 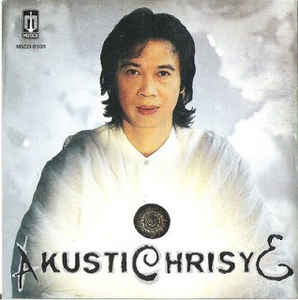 AkustiChrisye is a 16th studio album by the Indonesian singer Chrisye released in 1996 which was produced by Erwin Gutawa. It includes acoustic versions of several of his earlier songs, as well as new material.

Reza Rahadian Matulessy is an Indonesian actor who rose to prominence following his role in Perempuan Berkalung Sorban or (Woman with a Turban). Born in Bogor, he took up acting while in senior high school and made his feature film debut in 2004. Since receiving his first Piala Citra in 2009, he has acted in over a dozen films, ranging from comedies and romances to dramas and biopics. 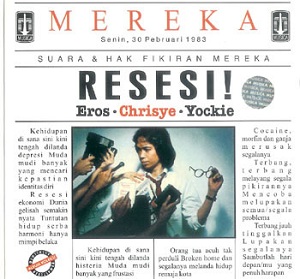 Resesi is a 1983 album by the Indonesian singer Chrisye. Recorded in collaboration with Jockie Soerjoprajogo and Eros Djarot after the latter's return from Germany, Resesi, which is Chrisye's sixth studio album, was inspired by the sound of The Police and featured songs influenced by CB radio and social criticism. It was a commercial hit upon release, selling 350,000 copies and being certified silver. In 2007 Rolling Stone Indonesia listed it as the 82nd best Indonesian album of all time.

Prenjak is an Indonesian short film.

Jakarta International Expo, or JIExpo, is a convention, exhibition and entertainment complex located at Pademangan in central Jakarta, Indonesia. Opened in 2010, it was developed by the Central Cipta Murdaya group. Built in the area of the former Kemayoran Airport. JIExpo recently underwent an expansion from 2016 to 2019, adding an international theatre and convention center.