Ben Austin Blair (born 26 March 1979 in Westport, New Zealand) is a rugby union footballer. He played four tests for New Zealand. He scored 37 points on his All Blacks debut against Ireland A in 2001 at Ravenhill in Belfast, however as this was not a test match he was not capped. His first Test match appearance came in November that year against Scotland.

Blair made his Canterbury debut in 1999 and his Crusaders debut in 2001. He won the Super 12 with the Crusaders in 2002, as well as the NPC and the Ranfurly Shield with Canterbury. He also scored an NPC First Division record of 37 points for Canterbury, against Counties Manukau in only his fourth NPC game.

In 2006, he moved to the Highlanders, before moving to the Cardiff Blues, with whom he played between 2007 and 2012. During his time in Cardiff he scored 1078 points, making him the all-time top points scorer for the team. [1] He scored two tries for Cardiff Blues, in the EDF Energy Cup final against Gloucester at Twickenham in April 2009. [2]

He was with SU Agen Lot-et-Garonne of the Top 14, however he was forced to retire due to injury without playing a single game for the side [3] 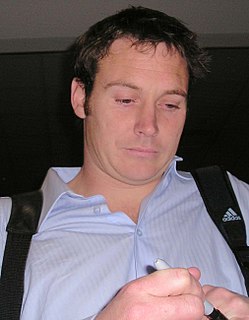 Andrew Philip Mehrtens is a former New Zealand rugby union footballer. He was regarded as a top Fly-half, having played first for Canterbury in 1993, before being selected for the All Blacks in 1995 when he played in the 1995 World Cup.

Douglas Charles Howlett is a retired professional New Zealand rugby union player. He was primarily a wing, but he also covered fullback at national and international levels. He finished his career with Munster Rugby in Ireland. With an outstanding 49 tries in 62 tests, Howlett is currently the seventh-highest try scorer in rugby union history and first on the all-time highest try scorers' list for the All Blacks. 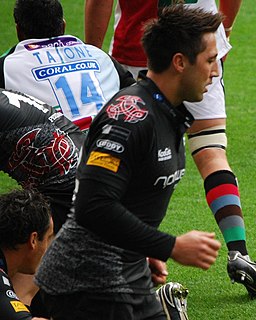 Gavin Lloyd Henson is a Welsh rugby union player who currently plays for Dragons in the Pro14. He attracted much media attention as part of a Wales national team which achieved Grand Slams in the Six Nations Championship in 2005 and 2008. He has also played for the British and Irish Lions, touring in 2005 to New Zealand but has never appeared at a World Cup.

Justin Warren Marshall, MNZM is a New Zealand former rugby union player. He played 81 games for the New Zealand All Blacks between 1995 and 2005. 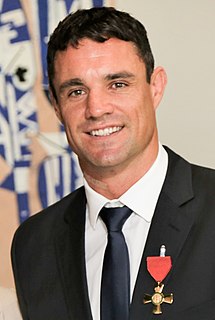 Sonny William "Bill" Williams is a New Zealand professional rugby league footballer who plays as a second-row forward for the Toronto Wolfpack in the Betfred Super League, and New Zealand at international level.

Leon Raymond MacDonald is a retired New Zealand rugby union footballer, and now head coach for the Auckland Blues rugby team, who played 56 tests for the national team, All Blacks. He played as a first five-eighth (fly-half), centre, and fullback.

Nathan Keith Mauger is a rugby union player. He spent the entirety of his Super Rugby career with the Canterbury Crusaders. He played for the All Blacks in 2002 in which he played 2 games but never played a test. He made his debut against Ireland A and played his latest game against Scotland A. His position is centre. He is the brother of All Black, Aaron Mauger. Mauger scored an NPC record 12 tries in the 2001 season for Canterbury.

Robert Maxwell Deans is a New Zealand rugby union coach and former player, currently the head coach of Japanese club Panasonic Wild Knights. He was head coach of the Australian national team between 2008 and 2013. Deans had previously coached the Crusaders for eight seasons and was an assistant coach of New Zealand between late 2001 and 2003. As the coach of the Crusaders, Deans has won more Super rugby titles than any other. He has also coached Canterbury in the National Provincial Championship, winning the title in 1997. As a player, Deans represented Canterbury, first playing at fly half, and later fullback. He also played nineteen matches for the All Blacks, including five tests.

Norman Michael Clifford Maxwell is a former New Zealand rugby union player. His usual position is at lock. He played for Northland and Canterbury in the NPC and he also represented Crusaders in the Super 12 rugby competition. He entered New Zealand rugby by playing for the NZ secondary schools in 1994, after which he represented NZ in the under 19 competition in 1995, he played for the colts in 1996 and 1997 and after which he joined the New Zealand Măori team in 1997-98. He also won the award for the most outstanding Măori player in 1999. He made his All Black debut on 18 June 1999 when he played against Samoa. He also played for the UK Barbarians against South Africa, since then he has played 36 test for the All Blacks and scoring five (5) tries in the process. He officially played his last test for the All Blacks against France on 27 November 2004.

Jamie Huw Roberts is a Welsh rugby union player. He has played for Wales since 2008, and has represented the British and Irish Lions on their tours to South Africa in 2009 and Australia in 2013. Roberts is currently playing for Stormers in Super Rugby. His usual position is centre.

Stephen Leigh Halfpenny is a Welsh rugby union player who plays as a fullback or wing for the Scarlets, Wales and the British and Irish Lions. Halfpenny is the third highest record points scorer for Wales after Neil Jenkins and Stephen Jones. 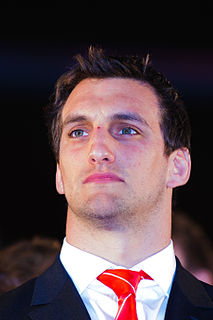 Matthew Brendon Todd is a New Zealand rugby union footballer, who plays as an Openside Flanker for the Panasonic Wild Knights in the Japanese Top League competition.

Benjamin Culmer Hurst is a former New Zealand rugby union player who played as a half-back. Hurst played for the Crusaders and the Highlanders wining two Super Rugby titles.

‹ The template below ( 2002 Crusaders rugby team ) is being considered for deletion. See templates for discussion to help reach a consensus. ›
This page is based on this Wikipedia article
Text is available under the CC BY-SA 4.0 license; additional terms may apply.
Images, videos and audio are available under their respective licenses.