The Boise Hawks are an independent baseball team of the Pioneer League, which is not affiliated with Major League Baseball (MLB) but is an MLB Partner League. Home games are played at Memorial Stadium in Garden City, Idaho, a small city surrounded by Boise.

From their establishment in 1987 through 2020, the Hawks were members of the Class A Short Season Northwest League. In conjunction with a contraction of Minor League Baseball in 2021, the team shifted to the Pioneer League, which was converted from an MLB-affiliated rookie league to an independent baseball league and granted status as an MLB Partner League.

Prior to moving to the Boise area, the team was the Tri-Cities Triplets, who played in Richland, Washington, for four seasons after moving over from Walla Walla in 1983. [4] An affiliate of the Texas Rangers for the first two seasons in Richland, they operated as an independent in 1985 and 1986. The Triplets were sold in the fall of 1986 to Diamond Sports and moved to Idaho for the 1987 season. [5] [6] Diamond Sports was headed by the Triplets' general manager Mal Fichman. [7] [8] [9] [10] [11] [12]

Their debut game was on the road and drew over 7,100 at Spokane, aided by the appearance of Hank Aaron. [6] [13] Continuing as an independent for their first three seasons in Boise, they joined the California Angels organization in 1990; the Angels were previously affiliated with the Bend Bucks for two seasons. [14] The Hawks made the playoffs that first season under the Angels and then won the league title four times in the next five years.

After eleven seasons with the Angels, the Hawks moved their affiliation in 2001 to the Chicago Cubs, who were with the Eugene Emeralds for the two previous seasons. [15] [16] Under the Cubs, the Hawks won two league titles and were runners-up three times. After fourteen years with Chicago, the Hawks switched in 2015 to the Rockies, who were previously affiliated with the Tri-City Dust Devils in Pasco for fourteen seasons. [17] The Boise Hawks had the “Dream Team” in 2012. This team had future big leaguers: Dan Vogelbach, Willson Contreras, Albert Almora Jr., Feliz Pena, Stephen Bruno, Marco Hernández, Trey Martin, Yasiel Balancourt, and Pierce Johnson. They also had the MILB Nickname Champ: Rock Shoulders

Due to the COVID-19 pandemic, the entire 2020 season for the minor leagues was cancelled. The following winter, as part the reorganization of minor league baseball, the Northwest League was elevated to the classification of High Single-A and renamed High-A West. The league was contracted to six teams and the Hawks were not extended an invitation to continue as a franchise affiliated with a major league organization. The franchise announced they will continue as members of the independent Pioneer League, an MLB Partner League . [18]

Prior to the cancelation of the 2020 season and subsequent minor league reorganization, the team was slated to appear as the "Boise Papas Fritas" in six 2020 home games as part of the "Copa de Diversion" program. [19]

The Hawks play their home games at Memorial Stadium in Garden City, north of the Western Idaho Fairgrounds. [20] The facility on the banks of the Boise River has a seating capacity of 3,500; it opened in 1989 for the Hawks' third season, its last without an affiliation. The stadium was privately built by an investor group led by Bill Pereira and son Cord Pereira. For their first two seasons, the Hawks played their home games at Bill Wigle Field on the campus of Borah High School. [9] [20]

Prior to the Hawks, Boise hosted two Northwest League franchises in the 1970s. The Boise A's played two seasons (1975, 1976), then relocated to Canada at Medicine Hat, Alberta. In 1978, the Boise Buckskins played just one season, went bankrupt, and ceased operations. Both clubs played at Borah Field (now Bill Wigle Field).

Boise had been a longtime member of the Pioneer League, then in Class C. The teams were originally known as the Pilots, then as the Yankees (1952, 1953). The club reverted to the Pilots moniker in 1954. Upon signing a player development contract with the Milwaukee Braves, Boise became the Braves and continued the relationship until 1963. Renowned broadcaster Bob Uecker played catcher for the league champion Boise Braves in 1956 and 1958. [21] The Pioneer League teams played at Airway Park, later known as Braves Field, about a half mile (0.8 km) east of Bronco Stadium, in Municipal Park in east Boise, now the site of the headquarters of the Idaho Department of Fish and Game.

The Boise Hawks are owned by Agon Sports & Entertainment LLC, and the company president is Jeff Eisemann. 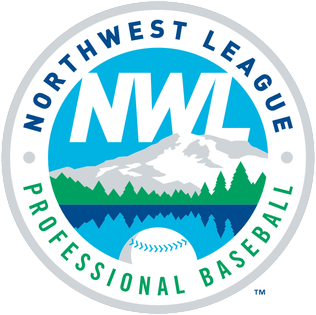 The Northwest League is a Minor League Baseball league that operates in the Northwestern United States and Western Canada. A Class A Short Season league for most of its history, the league was promoted to High-A as part of Major League Baseball's 2021 reorganization of the minor leagues. The league operated as the High-A West in 2021, then resumed its original moniker in 2022.

The Pioneer League is an independent baseball league that operates in the Rocky Mountain region of the United States. Its teams are not directly affiliated with Major League Baseball (MLB). It is designated as an MLB Partner League.

John Garrett Olerud, Jr., nicknamed "Johnny O", is an American former professional baseball player. He played in Major League Baseball as a first baseman from 1989 through 2005, most notably as a member of the Toronto Blue Jays team that won two consecutive World Series championships in 1992 and 1993. He also played for the New York Mets, Seattle Mariners, New York Yankees and the Boston Red Sox.

The Spokane Indians are a Minor League Baseball team located in Spokane Valley, the city immediately east of Spokane, Washington, in the Pacific Northwest. The Indians are members of the High-A Northwest League (NWL) as an affiliate of the Colorado Rockies. Spokane plays its home games at Avista Stadium, which opened in 1958 and has a seating capacity of 6,752.

The Tri-City Dust Devils are a Minor League Baseball team in the northwest United States, based in Pasco, Washington. The Dust Devils are members of the Northwest League and are affiliated with the Los Angeles Angels. Tri-City plays their home games at Gesa Stadium, which opened in 1995 and has a seating capacity of 3,654.

Memorial Stadium is an outdoor baseball park in the western United States, located in Boise, Idaho. The home field of the Boise Hawks of the independent Pioneer League, it has a current seating capacity of 3,452 on land owned by Ada County, adjacent to the Western Idaho Fairgrounds on the banks of the Boise River. 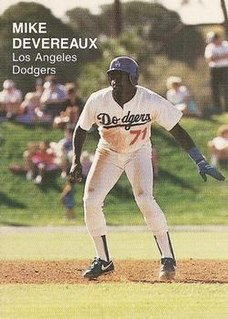 Michael Devereaux is an American former Major League Baseball outfielder. He was drafted by the Los Angeles Dodgers in the fifth round of the 1985 amateur draft and made his debut on September 2, 1987. Along with the Dodgers, Devereaux played for the Baltimore Orioles in two separate stints, and the Chicago White Sox, Atlanta Braves and Texas Rangers.

Gesa Stadium is a Minor League Baseball park in the northwest United States, located in Pasco, Washington. Opened in 1995, it is the home field of the Tri-City Dust Devils of the High-A West.

The Tri-City Atoms were a minor league baseball team located in Kennewick, Washington. The Atoms, unique in name, were one of many team names to represent Tri-City. The Tri-Cities in southeastern Washington, which include Kennewick, Richland, and Pasco, have fielded a number of minor league baseball teams in the Northwest League and its predecessor, the Western International League from 1955 to 1974. 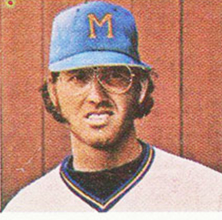 Danny Lee Thomas was a Major League Baseball player who played for the Milwaukee Brewers in late 1976 and early 1977. During his brief major league career, he became known as the "Sundown Kid" because of his well-publicized refusal to play on seventh-day Sabbath.

Kenneth Charles Hobart is a former professional football player, a quarterback in the USFL and CFL, where he played from 1985–1990.

Frederick Charles Brayton, usually known as Chuck Brayton or Bobo Brayton, was an American college baseball head coach; he led the Washington State Cougars for 33 seasons, from 1962 to 1994. He is the winningest coach in school history, with a record of 1,162 wins, 523 losses and eight ties—the fourth-best total in NCAA history at the time he retired.

The 1983 Idaho Vandals football team represented the University of Idaho in the 1983 NCAA Division I-AA football season. The Vandals, led by second-year head coach Dennis Erickson, were members of the Big Sky Conference and played their home games at the Kibbie Dome, an indoor facility on campus in Moscow, Idaho.

Joe Devine Airway Park was a minor league baseball stadium in the western United States, located in Boise, Idaho. Opened 83 years ago in 1939, the ballpark was the home of Boise's teams in the Class C Pioneer League, which briefly moved to Class A in 1963, the final year of the Braves and the ballpark.

The Triple-Cities Triplets were a minor league baseball team in the northwest United States, located in Richland, Washington, one of the Tri-Cities. The Triplets were members of the Class A short-season Northwest League for four seasons, from 1983 through 1986.

Reinaldo Albert Almora Jr. is an American professional baseball center fielder who is currently a free agent. He previously played in MLB for the Chicago Cubs, New York Mets and Cincinnati Reds.

Harris Field is a college baseball park in the western United States, located in Lewiston, Idaho. An on-campus venue with a seating capacity of 5,000, it is the home field of the Warriors of Lewis–Clark State College, a top program in National Association of Intercollegiate Athletics (NAIA). Since 1984, LCSC has won nineteen national titles and had six runner-up finishes.

The 1990 Idaho Vandals football team represented the University of Idaho in the 1990 NCAA Division I-AA football season. The Vandals were led by second-year head coach John L. Smith, were members of the Big Sky Conference and played their home games at the Kibbie Dome, an indoor facility on campus in Moscow, Idaho.