Since retiring as a player, Kerr has managed Albion Rovers and East Kilbride.

Kerr started his career with Newcastle United, but failed to hold down a regular first team place. Despite this, he won three caps for Scotland under the management of Berti Vogts. [1] When Kerr was released by Newcastle in 2004, he signed for his home town club Motherwell. [2] His career then suffered a major setback when he damaged an anterior cruciate ligament in a pre-season friendly, causing him to be out of football for almost nine months. [3] He finally made his debut for the club against Aberdeen on 9 April 2005. [4] After recovering from his injury, Kerr re-established his place in Motherwell's first-team squad, and he scored his first goal for the club with a spectacular strike in a 4–4 draw with Celtic in July 2005. [5]

In 2007, Kerr left Motherwell and signed a two-year contract with Hibernian. [6] Kerr scored (what proved to be the winner in a 1–0 victory) on his debut for Hibernian against Edinburgh derby rivals Hearts on 6 August 2007. [7] He played regularly under John Collins, but found it harder to hold down a first team place under Mixu Paatelainen and was released on 1 September 2008. [8]

It was reported by BBC Sport in September 2008 that Kerr was in signing talks with Major League Soccer club Toronto FC. [9] Kerr failed to agree terms with Toronto and then had unsuccessful trial periods with Brighton & Hove Albion and Oldham Athletic. [10] Kerr told the Daily Record during January 2009 that he may have to end his playing career due to his failure to find a new club since leaving Hibs. [11] Soon afterwards, however, new Inverness CT manager Terry Butcher invited Kerr on trial and he was signed on 2 February. [12] He made his debut for Inverness against former side Hibernian in a 2–0 win and scored his first goal against Hamilton. Inverness were relegated on the last day of the season and Kerr was subsequently released by the club.

In June 2016, Kerr was appointed to a coaching position by Albion Rovers. [19] After Darren Young left the club in May 2017, Kerr was appointed first-team manager on 8 May 2017. [20] He had a difficult first season, with Rovers being relegated to Scottish League Two in April 2018, and Kerr decided to leave the club soon afterwards. [21]

On 18 May 2018, Kerr was appointed manager of Lowland League club East Kilbride. [22] Kerr resigned his position as manager on 15 October 2018, to become assistant manager of Partick Thistle under Gary Caldwell. [23] Caldwell and Kerr were sacked by Thistle in September 2019. [24]

Stuart Ross Malcolm is a Scottish football coach and former player who is currently the manager of Forfar Athletic.

The 2007–08 Scottish League Cup was the 62nd staging of the Scotland's second most prestigious football knockout competition, also known for sponsorship reasons as the CIS Insurance Cup. 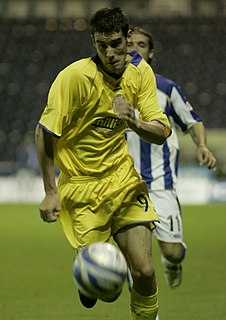 Brian Graham is a Scottish football player and coach, who plays for Scottish League One club Partick Thistle, and is also the manager of Partick Thistle W.F.C. in the Scottish Women's League Two.

Season 2008–09 for Hibernian was their tenth consecutive season of play in the Scottish Premier League. The SPL season began on 9 August 2008 with a 1–0 defeat at Kilmarnock. The team were eliminated from each cup competition at the first hurdle, due to defeats by IF Elfsborg in the last Intertoto Cup, Greenock Morton in the Scottish League Cup and Edinburgh derby rivals Hearts in the Scottish Cup. The team was inconsistent in the league, and only squeezed into the top six by a single point ahead of Motherwell. This led to the resignation of manager Mixu Paatelainen at the end of the season. One bright spot for the club was the performance of the under–19 team, which won the Scottish league & cup double. 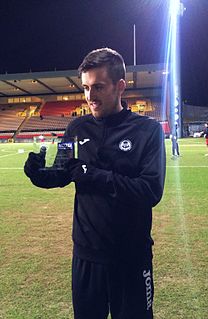 Callum Booth is a Scottish footballer, who plays as a left back for St Johnstone. Booth, who joined Hibernian aged 10, played for the youth team that won a league and cup double in 2009. After loan spells with Arbroath and Brechin City in 2010, he broke into the Hibernian first team in 2011. He was selected less frequently during 2012 and was loaned to Livingston for the 2012–13 season and then to Raith Rovers the following season. Booth moved to Partick Thistle in January 2015, initially on loan. After three years at Firhill he signed for Dundee United in May 2018, leaving the club in August 2019.

The 2013–14 season was Motherwell's twenty ninth consecutive season in the top flight of Scottish football and the first in the newly established Scottish Premiership, having been promoted from the Scottish First Division at the end of the 1984–85 season. They finished the season in second place, behind Celtic, earning entry to the Europa League again, having been knocked out of the 2013–14 seasons at the Third Qualifying Round stage by FC Kuban Krasnodar. They also competed in the League Cup, reaching the Quarter-Final, and the Scottish Cup where they reached the Fourth Round.

The 2014–15 Scottish Cup was the 130th season of Scotland's most prestigious football knockout competition. The tournament was sponsored by bookmaker William Hill in what was the fourth season of a five-year partnership.

The 2015–16 Scottish Cup was the 131st season of Scotland's most prestigious football knockout competition. The tournament was sponsored by bookmaker William Hill in what was the fifth season of a five-year partnership. The final was contested between second-tier clubs for the first time ever with no Premiership clubs reaching the final.

The 2015–16 season is Dundee United's 107th season, having been founded as Dundee Hibernian in 1909 and their third season in the Scottish Premiership. United will also compete in the League Cup and the Scottish Cup.

Simon Murray is a Scottish professional footballer who plays as a striker for Scottish League Two club Queen’s Park.