Brunei, officially the Nation of Brunei, the Abode of Peace, is a country located on the north coast of the island of Borneo in Southeast Asia. Apart from its coastline with the South China Sea, the sovereign state is completely surrounded by the Malaysian state of Sarawak. It is separated into two parts by the Sarawak district of Limbang. Brunei is the only sovereign state completely on the island of Borneo; the remainder of the island's territory is divided between the nations of Malaysia and Indonesia. Brunei's population was 423,196 in 2016.

The Brunei national football team nicknamed Tebuan, is the national team of the Brunei and is controlled by the National Football Association of Brunei Darussalam. The team was founded in 1959 and joined FIFA in 1969. In the past, they have also frequently featured in the Malaysian league and cup competitions as one of the state representative sides.

Brunei is one of the weakest nations in sport terms but has greatly improved since 1999.

The Brunei national cricket team was the team that represented the country of Brunei in international cricket. It was organised by the Brunei Darussalam National Cricket Association, which became an affiliate member of the International Cricket Council in 1992. However, the association had its membership revoked in 2015, meaning the team's current status is unclear. Brunei played its first recorded match in 1983, but did not appear in an international game until the 1996 ACC Trophy. The side did not appear in another Asian Cricket Council (ACC) tournament until 2004, but made regular appearances throughout the remainder of the decade. Brunei's last major tournament to date was the 2010 ACC Trophy Challenge in Thailand.

DST Group Brunei Premier League was the top-tier football league of Brunei until it was replaced by the Brunei Super League in 2012. It is currently the second tier in Brunei football, with two promotion places up for grabs. 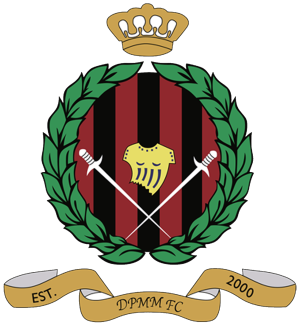 Duli Pengiran Muda Mahkota Football Club is a professional football club based in Bandar Seri Begawan, Brunei. The club played in the Brunei Premier League in the early 2000s, winning the league title in 2002 and 2004. The club then decided to play in Malaysia, and joined the Malaysian Premier League as a foreign-based team in for the 2005–06 season. They won promotion to the Malaysian Super League at the end of their first season in Malaysian football, and then finished 3rd and 10th in the following two season in the Super League. The club then left the Malaysian league and joined Singapore's Singapore Premier League for the 2009 season. They won the Singapore League Cup, but were then forced to withdraw from the league competition five games before the end of the season after FIFA suspended the Football Association of Brunei Darussalam for government interference in its affairs, thus barring teams from Brunei from taking part in overseas competitions. All the club's league results for 2009 were therefore expunged. At the end of the suspension, they re-entered the S.League and won the title in 2015, just after a near-miss in 2014.

The National Football Association of Brunei Darussalam used to enter a team in Malaysian football competitions. The team won the Malaysia Cup in 1999.

The Brunei FA Cup or DST FA Cup for sponsorship reasons is Brunei's premier knockout tournament in men's football (soccer). The current format is administered by the National Football Association of Brunei Darussalam (NFABD) since 2012.

This article details the fixtures and results of the Brunei national football team. The National Football Association of Brunei Darussalam was given a ban in 2008 by FIFA for government interference, which was lifted in 2011. The games below, therefore, are Brunei's first since April 2009.

The Brunei national rugby union sevens team currently competes in the IRB Asian Sevens Series. They are traditionally seen as "minnows". For example, in the 1989 Hong Kong Sevens, they lost 52-0 to Australia, who managed to score nine tries against them. Results have improved gradually since then culminating in victories over Laos and Indonesia during the inaugural IRB Asian Sevens Series in 2009.

The Brunei Super League or DST Super League for sponsorship reasons, is a Bruneian professional league for association football. It is at the top flight of the Bruneian football league system and it is managed by the National Football Association of Brunei Darussalam (NFABD). The league is contested between several teams and operates on a system of promotion and relegation with the Brunei Premier League. The clubs participating in this top flight league need to pass a set of requirements and verification process, particularly related to professionalism and infrastructure feasibility.

The 2016 Brunei Super League was the 4th season of the Brunei Super League, the top Bruneian professional league for association football clubs, since its establishment in 2012. The season began on 12 March 2016 and concluded on 30 September 2016.