Byron Dwight Houston (born November 22, 1969) is an American former professional basketball player. A 6'5", 250-pound power forward, he played collegiately for Oklahoma State University and was selected by the Chicago Bulls in the first round (27th pick overall) of the 1992 NBA draft. In an National Basketball Association (NBA) career that lasted four seasons, Houston played for the Golden State Warriors, Seattle SuperSonics and Sacramento Kings. He then played in the PBA [1] in 1997.

In June 2006, Houston was removed from a children's basketball camp in Oklahoma because he was registered as a sex offender in that state. [2] Houston has been convicted of four separate incidents of Indecent Exposure in Oklahoma County, Oklahoma. He is a registered sex offender. On June 13, 2007, Houston was arrested on counts of indecent exposure, engaging in a lewd act and driving with a canceled license. [3] On September 16, 2007, he was sentenced to four years in prison for violating probation stemming from this offense. Defense witnesses have claimed that Houston suffers from bipolar disorder and other conditions. [4]

Alvin Cyrrale Robertson is an American retired basketball player who played in the National Basketball Association (NBA) from 1984 to 1993, and for one final season in 1995–96. Robertson holds the record for the most steals per game played, averaging 2.71 steals per game for his career. He is the only guard in NBA history to have recorded a quadruple-double.

Bryant Reeves is an American retired professional basketball player. Reeves spent his entire career with the National Basketball Association's Vancouver Grizzlies, playing with the team from 1995 until 2001. He was nicknamed "Big Country" by his college teammate Byron Houston after Reeves was amazed following his first airplane flight across the United States, having grown up in the small community of Gans, Oklahoma.

Kenneth "The Jet" Smith is an American sports commentator and former professional basketball player in the National Basketball Association (NBA). He played in the NBA from 1987 to 1997 as a member of the Sacramento Kings, Atlanta Hawks, Houston Rockets, Detroit Pistons, Orlando Magic, and Denver Nuggets. He won two NBA championships with Houston.

Pierre Antoine Pierce is an American professional basketball player. A former member of the University of Iowa Hawkeyes men's team, Pierce was convicted of several crimes relating to a violent incident with a former girlfriend, leading to his dismissal from the Hawkeyes and eventual imprisonment. The 6-foot-4-inch and 195 lb (88 kg) point guard/shooting guard was the highest scoring player on the team at the time of his dismissal.

Mario Antoine Elie is an American basketball coach and former basketball player in the National Basketball Association (NBA). Elie grew up in New York City and played college basketball at American International College, before being drafted in the seventh round of the 1985 NBA draft as the 160th overall pick by the Milwaukee Bucks.

Peter Francis Newell was an American college men's basketball coach and basketball instructional coach. He coached for 15 years at the University of San Francisco, Michigan State University and the University of California, Berkeley, compiling an overall record of 234 wins and 123 losses. He led the University of California to the 1959 NCAA men's basketball championship, and a year later coached the gold medal-winning U.S. team at the 1960 Summer Olympics, a team that would be inducted as a unit to the Naismith Memorial Basketball Hall of Fame in 2010. After his coaching career ended he ran a world-famous instructional basketball camp and served as a consultant and scout for several National Basketball Association (NBA) teams. He is often considered to be one of the most influential figures in the history of basketball.

Elvin Ernest Hayes is an American retired professional basketball player and radio analyst for his alma-mater Houston Cougars. He is a member of the NBA's 50th Anniversary All-Time Team, and an inductee in the Naismith Memorial Basketball Hall of Fame. 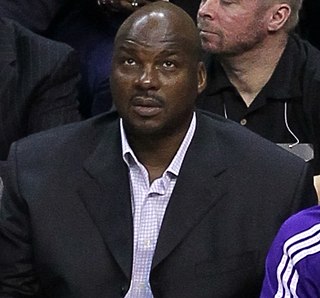 Chuck Connors Person is an American former basketball player and coach. Person played 14 seasons in the National Basketball Association (NBA) and was the 1987 NBA Rookie of the Year. Person played college basketball at Auburn University and was selected fourth overall in the 1986 NBA draft by the Indiana Pacers, for whom he played six seasons. He also played for the Minnesota Timberwolves, San Antonio Spurs, Charlotte Hornets and Seattle SuperSonics. His 17-year coaching career ended when Person was ensnared in a college recruitment scandal and pleaded guilty to a bribery charge.

Ruben Nathaniel Patterson is an American former professional basketball player. During his career, he played as a small forward and shooting guard. During his college career at the University of Cincinnati, Patterson earned third-team All-American honors and helped lead the Bearcats to Conference USA titles in both of his seasons there. Drafted by the Los Angeles Lakers in 1998, Patterson began his career with the Greek team AEK Athens BC before joining the Lakers in his rookie season. Later, he played for the NBA teams Seattle SuperSonics, Portland Trail Blazers, Denver Nuggets, Milwaukee Bucks, and Los Angeles Clippers before ending his career with the Lebanese team Champville SC.

Stephen Graham is an American former professional basketball player coach. Graham's twin brother, Joey, was his college teammate and has also played in the NBA. He is currently a player development coach with the Denver Nuggets.

Christopher Bernard Porter is an American professional basketball player who last played for the Hawke's Bay Hawks of the National Basketball League (NBL). Known for his large afro hairstyle and giant vertical leap, he created excitement early in his career with his dunking and rebounding abilities. Largely seen as too undersized to play power forward at the NBA level, his style fit in perfectly with coach Cliff Ellis' style of full court pressure while playing at Auburn.

David "Big Daddy D" Lattin is a former basketball player. He was the starting center for the Texas Western Miners in their NCAA championship year in 1966. During his playing career, he was listed at 6 feet 6 inches tall and 225 lbs.

Dwight E. Davis is a retired American professional basketball player. After playing college basketball at the University of Houston from 1969–72, Davis was selected as the 3rd overall pick of 1972 NBA draft by the Cleveland Cavaliers. Nicknamed "Double D", Davis played for five seasons in the NBA.

Cole David Aldrich is a former American professional basketball player for the Tianjin Golden Lions of the Chinese Basketball Association (CBA). He previously played for the Oklahoma City Thunder, Houston Rockets, Sacramento Kings, New York Knicks, Los Angeles Clippers and Minnesota Timberwolves. He played three seasons of college basketball for the University of Kansas before being drafted by the New Orleans Hornets with the 11th overall pick in the 2010 NBA draft.

In basketball, a double-double refers to a player, in a single game, accumulating ten or more of two of the following five statistical categories: points, rebounds, assists, steals, and blocked shots. The first "double" in the term refers to the two (double) categories and the second "double" refers to accumulating ten or more in that category. Similarly, a triple-double, quadruple-double, and quintuple-double refer to a player accumulating ten or more in three, four, or all five of the statistical categories, respectively. While double-doubles and triple-doubles occur regularly each NBA season, only four quadruple-doubles have ever officially been recorded in the NBA, and a quintuple-double has never officially been recorded at the professional, collegiate, or even high school boys' level. A similar coined term is the five-by-five, which refers to the accumulation of at least five in all five statistical categories.

The 1978–79 Oklahoma Sooners men's basketball team represented the University of Oklahoma in competitive college basketball during the 1978–79 NCAA Division I season. The Oklahoma Sooners men's basketball team played its home games in the Lloyd Noble Center and was a member of the National Collegiate Athletic Association's (NCAA) former Big Eight Conference at that time. The team posted a 21–10 overall record and a 10–4 conference record to finish first in the Conference for head coach Dave Bliss. This was the only Big Eight Conference Regular Season Championship for Bliss.

John Harding Lucas II is an American professional basketball coach and former player. He serves as the player development coach of the Houston Rockets of the National Basketball Association (NBA). He played basketball and tennis at the University of Maryland, College Park and was an All-American in both.