The inbred strain of C57BL mice was created in 1921 by C. C. Little at the Bussey Institute for Research in Applied Biology. [1] The substrain "6" was the most popular of the surviving substrains. Little's supervisor William E. Castle had obtained the predecessor strain of C57BL/6, "mouse number 57", from Abbie Lathrop who was breeding inbred strains for mammary tumor research in collaboration with Leo Loeb at the time. [2]

C57BL/6 mice have a dark brown, nearly black coat. They are more sensitive to noise and odours and are more likely to bite than the more docile laboratory strains such as BALB/c. [3] They are good breeders. [1]

Group-housed B6 male mice display barbering behavior, in which the dominant mouse in a cage selectively removes hair from its subordinate cage mates. Mice that have been barbered have large bald patches on their bodies, commonly around the head, snout, and shoulders, although barbering may appear anywhere on the body. Both hair and whiskers may be removed. [4]

C57BL/6 has many unusual characteristics that make it useful for some work and inappropriate for other: It is unusually sensitive to pain and to cold, and analgesic medications are less effective in it. [1] [5] Unlike most mouse strains, it drinks alcoholic beverages voluntarily. It is more susceptible than average to morphine addiction, atherosclerosis,[ citation needed ] and age-related hearing loss. [6]

The C57BL/6 mouse was the second-ever mammalian species to have its entire genome published. [1]

The dark coat make the mouse strain convenient for creating transgenic mice: it is crossed with a light-furred 129 mouse, and the desirable crosses can be easily identified by their mixed coat colors. [1]

There now exist colonies of mice derived from the original C57BL/6 colony that have been bred in isolation from one another for many hundreds of generations. Owing to genetic drift these colonies differ widely from one another (and, it goes without saying, from the original mice isolated at the Bussey Institute). Responsible scientists, including those at accredited repositories, are careful to point out this fact and take pains to distinguish sublines such as C57BL/6J (the established subline at The Jackson Laboratory) from C57BL/6N, etc. But even within these sublines, the potential for drift exists in colonies maintained by individual laboratories who do not have a systematic practice of reestablishing breeders from a centralized, vetted stock.

By far the most popular laboratory rodent, the C57BL/6 mouse accounts for half to five-sixths of all rodents shipped to research laboratories from American suppliers. [1] Its overwhelming popularity is due largely to inertia: it has been widely used and widely studied, and therefore it is used even more. [1]

In 1993 the first C57BL/6 gene targeted knockout mouse was published by Frank Koentgen. [7]

In 2015 C57BL/6NTac females provided by Taconic Biosciences were sent to the International Space Station on SpaceX CRS-6. [9]

A model organism is a non-human species that is extensively studied to understand particular biological phenomena, with the expectation that discoveries made in the model organism will provide insight into the workings of other organisms. Model organisms are widely used to research human disease when human experimentation would be unfeasible or unethical. This strategy is made possible by the common descent of all living organisms, and the conservation of metabolic and developmental pathways and genetic material over the course of evolution.

Inbred strains are individuals of a particular species which are nearly identical to each other in genotype due to long inbreeding. A strain is inbred when it has undergone at least 20 generations of brother x sister or offspring x parent mating, at which point at least 98.6% of the loci in an individual of the strain will be homozygous, and each individual can be treated effectively as clones. Some inbred strains have been bred for over 150 generations, leaving individuals in the population to be isogenic in nature. Inbred strains of animals are frequently used in laboratories for experiments where for the reproducibility of conclusions all the test animals should be as similar as possible. However, for some experiments, genetic diversity in the test population may be desired. Thus outbred strains of most laboratory animals are also available, where an outbred strain is a strain of an organism that is effectively wildtype in nature, where there is as little inbreeding as possible. 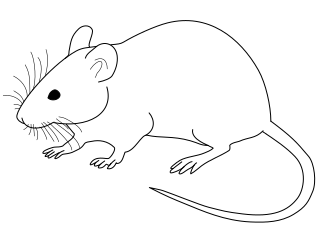 The laboratory mouse or lab mouse is a small mammal of the order Rodentia which is bred and used for scientific research or feeders for certain pets. Laboratory mice are usually of the species Mus musculus. They are the most commonly used mammalian research model and are used for research in genetics, psychology, medicine and other scientific disciplines. Mice belong to the Euarchontoglires clade, which includes humans. This close relationship, the associated high homology with humans, their ease of maintenance and handling, and their high reproduction rate, make mice particularly suitable models for human-oriented research. The laboratory mouse genome has been sequenced and many mouse genes have human homologues. 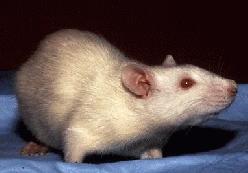 A laboratory rat or lab rat is a brown rat of the subspecies Rattus norvegicus domestica which is bred and kept for scientific research. While less commonly used for research than mice, rats have served as an important animal model for research in psychology and biomedical science.

BALB/c is an albino, laboratory-bred strain of the house mouse from which a number of common substrains are derived. Now over 200 generations from New York in 1920, BALB/c mice are distributed globally, and are among the most widely used inbred strains used in animal experimentation. 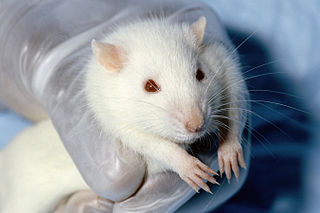 Rodents are commonly used in animal testing, particularly mice and rats, but also guinea pigs, hamsters, gerbils and others. Mice are the most commonly used vertebrate species, due to their availability, size, low cost, ease of handling, and fast reproduction rate.

Leo Loeb, was a German-American physician, educator, and experimental pathologist.

A genetically modified mouse or genetically engineered mouse model (GEMM) is a mouse that has had its genome altered through the use of genetic engineering techniques. Genetically modified mice are commonly used for research or as animal models of human diseases, and are also used for research on genes. Together with patient-derived xenografts (PDXs), GEMMs are the most common in vivo models in cancer research. Both approaches are considered complementary and may be used to recapitulate different aspects of disease. GEMMs are also of great interest for drug development, as they facilitate target validation and the study of response, resistance, toxicity and pharmacodynamics.

A recombinant inbred strain is an organism with chromosomes that incorporate an essentially permanent set of recombination events between chromosomes inherited from two or more inbred strains. F1 and F2 generations are produced by intercrossing the inbred strains; pairs of the F2 progeny are then mated to establish inbred strains through long-term inbreeding.

Jacqueline N. Crawley is an American behavioral neuroscientist and an expert on rodent behavioral analysis. Since July 2012, she is the Robert E. Chason Chair in Translational Research in the MIND Institute and professor of psychiatry and behavioral sciences at the University of California, Davis School of Medicine in Sacramento. Previously, from 1983–2012, she was chief of the Laboratory of Behavioral Neuroscience in the intramural program of the National Institute of Mental Health. Her translational research program focuses on testing hypotheses about the genetic causes of autism spectrum disorders and discovering treatments for the diagnostic symptoms of autism, using mouse models. She has published more than 275 peer-reviewed articles in scientific journals and 110 review articles and book chapters. According to Scopus, her works have been cited over 36,000 times, giving her an h-index of 99. She has co-edited 4 books and is the author of What's Wrong With my Mouse? Behavioral Phenotyping of Transgenic and Knockout Mice, which was very well received.

The tail flick test is a test of the pain response in animals, similar to the hot plate test. It is used in basic pain research and to measure the effectiveness of analgesics, by observing the reaction to heat. It was first described by D'Amour and Smith in 1941.

Justin S. Rhodes is an American neuroscientist and a professor in the Department of Psychology at the University of Illinois at Urbana-Champaign. He is affiliated with the Neuroscience Program, Program of Ecology, Evolution, & Conservation Biology, the Carl R. Woese Institute for Genomic Biology, and the Neurotech group at Beckman Institute for Advanced Science and Technology. After receiving a Bachelor of Science in biology at Stanford University, Rhodes obtained a PhD in zoology in 2002 from University of Wisconsin–Madison, under the supervision of Theodore Garland, Jr.. After completing a postdoctoral fellowship at Oregon Health & Science University, he held a position as an instructor at Lewis & Clark College for a year before accepting a full-time faculty position in 2005 in the biological division of the Department of Psychology at the University of Illinois. His lab investigates a broad array of topics in the field of neuroscience with particular emphasis in exercise-induced hippocampal neurogenesis, neural circuitry involved in addictive behaviors, and brain plasticity in clownfish.

Abbie E. C. Lathrop was a rodent fancier who bred fancy mice and inbred strains for animal models, particularly for research on development and hereditary properties of cancer.

Jeffrey S. Mogil, FCAHS, FRSC is a Canadian neuroscientist and the E.P. Taylor Professor of Pain Studies and Canada Research Chair in the Genetics of Pain at McGill University. He is known for his work in the genetics of pain, for being among the first scientists to demonstrate sex differences in pain perception, and for identifying previously unknown factors and confounds that affect the integrity of contemporary pain research. He has an h-index of 90.

The Japanese house mouse or Japanese wild mouse is a type of house mouse that originated in Japan. Genetically, it is a hybrid between the southeastern Asian house mouse and the eastern European house mouse. It is thus not a unique subspecies, but is treated as such for its characteristic features. It is among the smallest house mice. Different strains such as MSM/Ms, JF1, Japanese waltzing mouse, C57BL/6J and MSKR exist following cross breeding with other house mice, and are used in different genetic and medical investigations.