In single-celled organisms, cell proliferation is largely responsive to the availability of nutrients in the environment (or laboratory growth medium).

In multicellular organisms, the process of cell proliferation is tightly controlled by gene regulatory networks encoded in the genome and executed mainly by transcription factors including those regulated by signal transduction pathways elicited by growth factors during cell–cell communication in development. [4] In addition, intake of nutrients in animals can induce circulating hormones of the Insulin/IGF-1 family, which are also considered growth factors, and that function to promote cell proliferation in cells throughout the body that are capable of doing so. 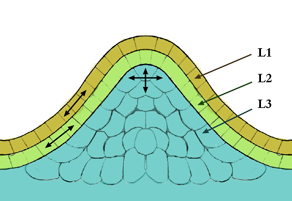 The meristem is a type of tissue found in plants. It consists of undifferentiated cells capable of cell division. Cells in the meristem can develop into all the other tissues and organs that occur in plants. These cells continue to divide until a time when they get differentiated and then lose the ability to divide.

Paracrine signaling is a form of cell signaling, a type of cellular communication in which a cell produces a signal to induce changes in nearby cells, altering the behaviour of those cells. Signaling molecules known as paracrine factors diffuse over a relatively short distance, as opposed to cell signaling by endocrine factors, hormones which travel considerably longer distances via the circulatory system; juxtacrine interactions; and autocrine signaling. Cells that produce paracrine factors secrete them into the immediate extracellular environment. Factors then travel to nearby cells in which the gradient of factor received determines the outcome. However, the exact distance that paracrine factors can travel is not certain. 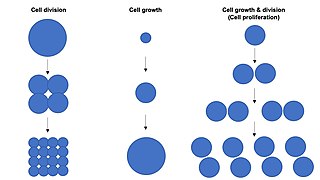 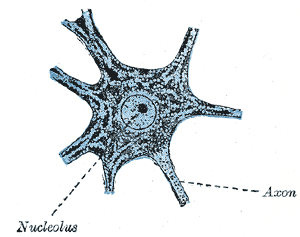 The G0 phase describes a cellular state outside of the replicative cell cycle. Classically, cells were thought to enter G0 primarily due to environmental factors, like nutrient deprivation, that limited the resources necessary for proliferation. Thus it was thought of as a resting phase. G0 is now known to take different forms and occur for multiple reasons. For example, most adult neuronal cells, among the most metabolically active cells in the body, are fully differentiated and reside in a terminal G0 phase. Neurons reside in this state, not because of stochastic or limited nutrient supply, but as a part of their developmental program.

Endoreduplication is replication of the nuclear genome in the absence of mitosis, which leads to elevated nuclear gene content and polyploidy. Endoreplication can be understood simply as a variant form of the mitotic cell cycle (G1-S-G2-M) in which mitosis is circumvented entirely, due to modulation of cyclin-dependent kinase (CDK) activity. Examples of endoreplication characterized in arthropod, mammalian, and plant species suggest that it is a universal developmental mechanism responsible for the differentiation and morphogenesis of cell types that fulfill an array of biological functions. While endoreplication is often limited to specific cell types in animals, it is considerably more widespread in plants, such that polyploidy can be detected in the majority of plant tissues.

Compartments can be simply defined as separate, different, adjacent cell populations, which upon juxtaposition, create a lineage boundary. This boundary prevents cell movement from cells from different lineages across this barrier, restricting them to their compartment. Subdivisions are established by morphogen gradients and maintained by local cell-cell interactions, providing functional units with domains of different regulatory genes, which give rise to distinct fates. Compartment boundaries are found across species. In the hindbrain of vertebrate embryos, rhobomeres are compartments of common lineage outlined by expression of Hox genes. In invertebrates, the wing imaginal disc of Drosophila provides an excellent model for the study of compartments. Although other tissues, such as the abdomen, and even other imaginal discs are compartmentalized, much of our understanding of key concepts and molecular mechanisms involved in compartment boundaries has been derived from experimentation in the wing disc of the fruit fly.

In cell biology, contact inhibition refers to two different but closely related phenomena: contact inhibition of locomotion (CIL) and contact inhibition of proliferation (CIP). CIL refers to the avoidance behavior exhibited by fibroblast-like cells when in contact with one another. In most cases, when two cells contact each other, they attempt to alter their locomotion in a different direction to avoid future collision. When collision is unavoidable, a different phenomenon occurs whereby growth of the cells of the culture itself eventually stops in a cell-density dependent manner. Both types of contact inhibition are well-known properties of normal cells and contribute to the regulation of proper tissue growth, differentiation, and development. It is worth noting that both types of regulation are normally negated and overcome during organogenesis during embryonic development and tissue and wound healing. However, contact inhibition of locomotion and proliferation are both aberrantly absent in cancer cells, and the absence of this regulation contributes to tumorigenesis.

Myogenesis is the formation of skeletal muscular tissue, particularly during embryonic development.

Decapentaplegic (Dpp) is a key morphogen involved in the development of the fruit fly Drosophila melanogaster and is the first validated secreted morphogen. It is known to be necessary for the correct patterning and development of the early Drosophila embryo and the fifteen imaginal discs, which are tissues that will become limbs and other organs and structures in the adult fly. It has also been suggested that Dpp plays a role in regulating the growth and size of tissues. Flies with mutations in decapentaplegic fail to form these structures correctly, hence the name. Dpp is the Drosophila homolog of the vertebrate bone morphogenetic proteins (BMPs), which are members of the TGF-β superfamily, a class of proteins that are often associated with their own specific signaling pathway. Studies of Dpp in Drosophila have led to greater understanding of the function and importance of their homologs in vertebrates like humans.

Stem-cell niche refers to a microenvironment, within the specific anatomic location where stem cells are found, which interacts with stem cells to regulate cell fate. The word 'niche' can be in reference to the in vivo or in vitro stem-cell microenvironment. During embryonic development, various niche factors act on embryonic stem cells to alter gene expression, and induce their proliferation or differentiation for the development of the fetus. Within the human body, stem-cell niches maintain adult stem cells in a quiescent state, but after tissue injury, the surrounding micro-environment actively signals to stem cells to promote either self-renewal or differentiation to form new tissues. Several factors are important to regulate stem-cell characteristics within the niche: cell–cell interactions between stem cells, as well as interactions between stem cells and neighbouring differentiated cells, interactions between stem cells and adhesion molecules, extracellular matrix components, the oxygen tension, growth factors, cytokines, and the physicochemical nature of the environment including the pH, ionic strength and metabolites, like ATP, are also important. The stem cells and niche may induce each other during development and reciprocally signal to maintain each other during adulthood. 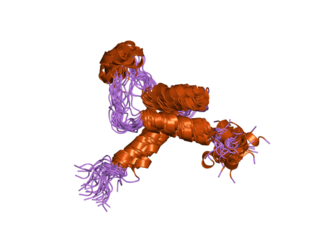 TEAD2, together with TEAD1, defines a novel family of transcription factors, the TEAD family, highly conserved through evolution. TEAD proteins were notably found in Drosophila (Scalloped), C. elegans, S. cerevisiae and A. nidulans. TEAD2 has been less studied than TEAD1 but a few studies revealed its role during development.

Changes in the genome that allow uncontrolled cell proliferation or cell immortality are responsible for cancer. It is believed that the major changes in the genome that lead to cancer arise from mutations in tumor suppressor genes. In 1997, Kinzler and Bert Vogelstein grouped these cancer susceptibility genes into two classes: "caretakers" and "gatekeepers". In 2004, a third classification of tumor suppressor genes was proposed by Franziska Michor, Yoh Iwasa, and Martin Nowak; "landscaper" genes.

The Hippo signaling pathway, also known as the Salvador-Warts-Hippo (SWH) pathway, is a signaling pathway that controls organ size in animals through the regulation of cell proliferation and apoptosis. The pathway takes its name from one of its key signaling components—the protein kinase Hippo (Hpo). Mutations in this gene lead to tissue overgrowth, or a "hippopotamus"-like phenotype.

The hallmarks of cancer were originally six biological capabilities acquired during the multistep development of human tumors and have since been increased to eight capabilities and two enabling capabilities. The idea was coined by Douglas Hanahan and Robert Weinberg in their paper TheHallmarks of Cancer published January 2000 in Cell.

Septate junctions are intercellular junctions found in invertebrate epithelial cells, appearing as ladder-like structures under electron microscopy. They are thought to provide structural strength and a barrier to solute diffusion through the intercellular space. They are considered somewhat analogous to the (vertebrate) tight junctions; however, tight and septate junctions are different in many ways. Known insect homologues of tight junction components are components of conserved signalling pathways that localize to either adherens junctions, the subapical complex, or the marginal zone. Recent studies show that septate junctions are also identified in the myelinated nerve fibers of the vertebrates.

Liver regeneration is the process by which the liver is able to replace lost liver tissue from growth from the remaining tissue. The liver is the only visceral organ that possesses the capacity to regenerate. The liver can regenerate after either surgical removal or chemical injury. It is known that as little as 51% of the original liver mass can regenerate back to its full size. The process of regeneration in mammals is mainly compensatory growth because only the mass of the liver is replaced, not the shape. However, in lower species such as fish, both liver size and shape can be replaced.

Neurogenesis is the process by which nervous system cells, the neurons, are produced by neural stem cells (NSCs). It occurs in all species of animals except the porifera (sponges) and placozoans. Types of NSCs include neuroepithelial cells (NECs), radial glial cells (RGCs), basal progenitors (BPs), intermediate neuronal precursors (INPs), subventricular zone astrocytes, and subgranular zone radial astrocytes, among others.

Dragana Rogulja is a Serbian neuroscientist and circadian biologist who is an Assistant Professor in Neurobiology within the Harvard Medical School Blavatnik Institute of Neurobiology. Rogulja explores the molecular mechanisms governing sleep in Drosophila as well as probing how circadian mechanisms integrate sensory information to drive behavior. Rogulja uses mating behavior in Drosophila to explore the neural circuits linking internal states to motivated behaviors.