Cesare Maniago (born January 13, 1939) is a Canadian former professional ice hockey goaltender. Maniago played the majority of his National Hockey League (NHL) career for the Minnesota North Stars, for whom he stands second all-time in games played in goal.

Originally the property of the Toronto Maple Leafs, the young goalie played seven games for the Leafs in the 1960–61 season. Picked up by the Montreal Canadiens in the inter-league draft the following season, Maniago underwent a lengthy apprenticeship in the minor leagues, spending the better part of five years on the farm. The high point of his years with Montreal was a 14-game stint in relief of the ailing Jacques Plante during the 1963 season. He had a sparkling season for the Minneapolis Bruins of the Central Hockey League in 1965, winning the league's most valuable player award, after which he was dealt to the New York Rangers. Maniago competed against Ed Giacomin and Don Simmons for the starting goal position in 1966, playing 28 games for the last place team. On March 12, 1966, in Chicago, Maniago allowed the Chicago Black Hawks' star left winger Bobby Hull's 51st goal of the season, the first time in league history that any player had scored more than 50 goals in one year. After the game, Maniago insisted that Chicago's crafty forward Eric Nesterenko had interfered with him during the play: "Nesterenko lifted the blade of my stick, and the puck went under it." [1] Giacomin firmly won the job the next season as the much-improved Rangers made the playoffs, and Maniago played in just six games as his backup.

With expansion arriving the next season, Maniago had his opportunity. He was the first draft choice of the expansion Minnesota North Stars, immediately becoming their number one goaltender, a job he kept for the next nine seasons. Maniago's play led the North Stars into the playoffs five of their first six seasons. One of his best years was his first with the team, where he had career highs in wins and shutouts while leading underdog Minnesota into the 1967-68 West Division semi-finals. The North Stars struggled the next season, finishing in last place and missing the playoffs.

Unable to find a suitable goalie to help Maniago with the workload (the other goalies the team tried went a combined 11-35-16 in Minnesota's first three seasons) the North Stars obtained Gump Worsley's rights from the Canadiens, talking him out of retirement in 1970. The late-season addition rejuvenated the struggling team, who finished strongly, ending up in third place. Over the next three seasons the tandem led the North Stars into the playoffs, including an appearance against Montreal in the 1971 semifinals. In this series, Minnesota was the first expansion team to defeat an Original Six team in a playoff game, beating the Canadiens twice.

Starting in 1974, the fortunes of the Minnesota club sagged and Maniago's play suffered as well. After that season Worsley retired, leaving Maniago as the sole experienced goalie on the struggling team. After the 1976 season, he was traded to the Vancouver Canucks, for whom he played his two final seasons.

Maniago retired with 190 wins in 568 games, recording 30 shutouts and a career 3.27 goals against average, leading Minnesota goaltenders in every meaningful statistical category. At the time of his retirement, he was in the top 25 in NHL history in shutouts, fifth in all-time losses and twelfth in all-time games played.

After his retirement, Maniago served several seasons as the Canucks' goaltender coach.

Maniago remains second in all-time games played and minutes played in net for the Minnesota/Dallas franchise behind Marty Turco, and is third in wins and shutouts to Ed Belfour and Turco. 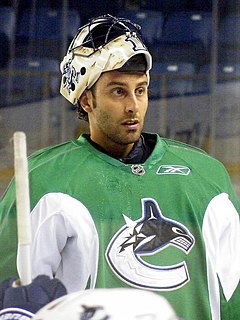 Roberto Luongo is a Canadian former professional ice hockey goaltender. He played 19 seasons in the National Hockey League (NHL) for the New York Islanders, Florida Panthers and the Vancouver Canucks. Luongo is a two-time NHL Second Team All-Star and a winner of the William M. Jennings Trophy for backstopping his team to the lowest goals against average in the league. He was a finalist for several awards, including the Vezina Trophy as the league's best goaltender, the Lester B. Pearson Award as the top player voted by his peers, and the Hart Memorial Trophy as the league's most valuable player (2007). Luongo is second all time in games played as an NHL goaltender (1,044) and third all time in wins (489). He employed the butterfly style of goaltending.

Marty Vincent Turco is a Canadian former professional ice hockey goaltender who played 11 seasons in the National Hockey League (NHL). He played nine seasons with the Dallas Stars and one season each with the Chicago Blackhawks and Boston Bruins. Due to his puck-handling prowess, Canadian hockey personality Don Cherry named Turco "the smartest goalie in the NHL". Turco currently serves as an in-studio analyst at NHL Network.

Lorne John "Gump" Worsley was a professional ice hockey goaltender. Born and raised in Montreal, Quebec, 'Gump' was given his nickname because friends thought he looked like comic-strip character Andy Gump.

The 2000–01 NHL season was the 84th regular season of the National Hockey League. With the addition of the expansion Columbus Blue Jackets and the Minnesota Wild, 30 teams each played 82 games. The Stanley Cup winners were the Colorado Avalanche, who won the best of seven series 4–3 against the New Jersey Devils. The focus of Colorado's Stanley Cup run was on star defenceman Ray Bourque, who was on a quest to win his first Stanley Cup championship in his illustrious 22-year career. 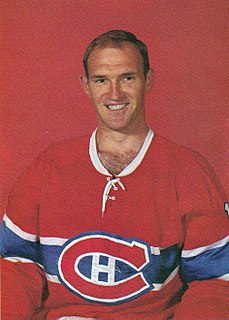 Charles Edward Hodge was a Canadian ice hockey player who played as a goaltender for the Montreal Canadiens, Vancouver Canucks, and Oakland Seals of the National Hockey League. 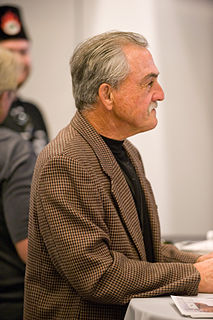 The 1968–69 NHL season was the 52nd season of the National Hockey League. Twelve teams each played 76 games. For the second time in a row, the Montreal Canadiens faced the St. Louis Blues in the Stanley Cup finals. Montreal won their second consecutive Stanley Cup as they swept the Blues in four, an identical result to the previous season.

The 1977–78 NHL season was the 61st season of the National Hockey League. The Montreal Canadiens won their third Stanley Cup in a row, defeating the Boston Bruins four games to two in the Stanley Cup Finals.

Gilles Gilbert is a Canadian former professional ice hockey goaltender who was drafted in the third round of the 1969 NHL Amateur Draft from the London Knights. He played in the National Hockey League (NHL) for the Minnesota North Stars and Detroit Red Wings, but most notably for the Boston Bruins.

Mike Smith is a Canadian professional ice hockey goaltender for the Edmonton Oilers of the National Hockey League (NHL). He has previously played for the Dallas Stars, Tampa Bay Lightning, Arizona Coyotes, and the Calgary Flames. He is the 11th goaltender in NHL history to score a goal, which he did in the 2013–14 season against the Detroit Red Wings in Phoenix.

Gilles Emile Meloche is a Canadian professional ice hockey coach, scout and former player. Meloche played as a goaltender in the National Hockey League (NHL) for the Chicago Black Hawks, California Golden Seals, Cleveland Barons, Minnesota North Stars and Pittsburgh Penguins. He is currently a special assignment scout for the Pittsburgh Penguins. Until 2013 he was the team's longtime goaltending coach, during which time the team won three Stanley Cups. Meloche was born in Montreal, Quebec. 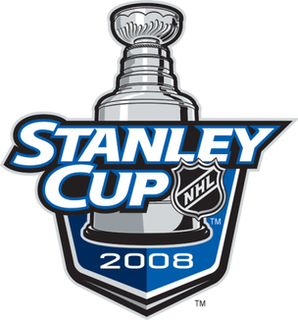 The 1959–60 Montreal Canadiens season was the club's 51st season of play. The team had another outstanding season, placing first in the league and winning the Stanley Cup for the fifth consecutive season, and the 12th time in team history.

Antti Niemi is a Finnish professional ice hockey goaltender currently an unrestricted free agent who most recently played for Jokerit of the Kontinental Hockey League (KHL).