Last updated August 20, 2021
For other uses, see Shut Out (disambiguation).
Not to be confused with Penalty shootout.

In team sports, a shutout (US) or clean sheet (UK) is a game in which one team prevents the other from scoring any points. While possible in most major sports, they are highly improbable in some sports, such as basketball.

Shutouts are usually seen as a result of effective defensive play even though a weak opposing offense may be as much to blame. Some sports credit individual players, particularly goalkeepers and starting pitchers, with shutouts and keep track of them as statistics; others do not.

A shutout in American football is uncommon but not exceptionally rare. Keeping an opponent scoreless in American football requires a team's defense to be able to consistently shut down both pass and run offenses over the course of a game. The difficulty of completing a shutout is compounded by the many ways a team can score in the game. For example, teams can attempt field goals, which have a high rate of success. The range of NFL caliber kickers makes it possible for a team with a weak offense to get close enough (within 50 yards) to the goalposts and kick a field goal. Of 2,544 regular season NFL games from 2000–2009, 89 (3.5%) were shutouts.

There are at least five instances in American football in which a team had been shut out throughout an entire season, and four in which a team has shut out all of their opponents in the season (the longest of these being the ten-game perfect season in which the 1933 Providence Huskies did not concede a single point). [1]

The achievement of a shutout is much more difficult in Canadian football, where scoring and offensive movement is generally more frequent and a single point can be scored simply by punting the ball from any point on the field into the end zone.

In association football and other sports with a goalkeeper, the goalie may be said to "keep a clean sheet" if they prevent their opponents from scoring during an entire match. Because football is a relatively low-scoring game, it is common for one team, or even both teams, to score no goals. [2] A theory as to the term's origin is that sports reporters used separate pieces of paper to record the different statistical details of a game. If one team did not allow a goal, then that team's "details of goals conceded" page would appear blank, leaving a clean sheet. [2]

In Major League Baseball, a shutout (denoted statistically as ShO or SHO [3] ) refers to the act by which a single pitcher pitches a complete game and does not allow the opposing team to score a run. If two or more pitchers combine to complete this act, no pitcher will be awarded a shutout, although the team itself can be said to have "shut out" the opposing team. The only exception to this is when a pitcher enters a game before the opposing team scores a run or makes an out and then completes the game without allowing a run to score. That pitcher is then awarded a shutout, although not a complete game.

The all-time career leader in shutouts is Walter Johnson, who pitched for the Washington Senators from 1907 to 1927. He accumulated 110 shutouts, [4] which is 20 more than second placed Grover Cleveland Alexander. [5] The most shutouts recorded in one season was 16, which was a feat accomplished by both Grover Alexander (1916) and George Bradley (1876). [6] These records are considered among the most secure records in baseball, as pitchers today rarely earn more than one or two shutouts per season with a heavy emphasis on pitch count and relief pitching. Complete games themselves have also become rare among starting pitchers. As of 2021, the current active leader in shutouts is Clayton Kershaw of the Los Angeles Dodgers, who he has recorded 15 shutouts, which ties him for 463rd all time. Only four pitchers whose entire careers were in the post-1920 live-ball era threw as many as 60 career shutouts, with Warren Spahn leading those pitchers with 63. [7]

In ice hockey, a shutout (SO) is credited to a goaltender who successfully stops the other team from scoring during the entire game. A shutout may be shared between two goaltenders, but will not be listed in either of their individual statistics. The record holder for most regular-season career shutouts in the National Hockey League (NHL) is Martin Brodeur with 125 (see the all-time regular season shutout leaders). The modern-day record for a team being shut out in a season is held by the Columbus Blue Jackets at 16, during the 2006–07 season. In the event a shutout happens while using several goaltenders, the shutout will be credited to the team who shut out the opponent. However, no single goaltender will be awarded the shutout. This has happened several times in NHL history:

Clean sheets are not common in either rugby union or league, since it is relatively simple to score a penalty kick. The 2005 Gillette Rugby League Tri-Nations final was the first time that Australia had been "nilled" since 1981.[ citation needed ] There is no alternative term for the occurrence of a team failing to score, except to say that the team scored "nil" (or "zero" or "nothing" in North America). For example, the December 2006 Celtic League match between Munster and Connacht ended 13–0 to Munster; [12] it was, therefore, said that Munster won "thirteen–nil."

Generally, a team that is well-disciplined defensively, as well as behaviorally (not giving away penalty kicks), is most likely to not concede scores. This may also occur if there is a significant difference in class between the two teams, for example, when Scotland beat Spain (who were playing in their only Rugby World Cup) 48–0 in the 1999 Rugby World Cup, [13] or when Australia beat Namibia 142–0 in the 2003 Rugby World Cup. [14] 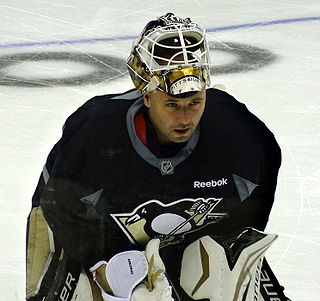 Tomáš Vokoun is a Czech former professional ice hockey goaltender. He played in the National Hockey League (NHL) for the Pittsburgh Penguins, Washington Capitals, Florida Panthers, Nashville Predators and the Montreal Canadiens, with whom he was originally drafted in the ninth round, 226th overall, in the 1994 NHL Entry Draft.

Joseph Georges Gonzague Vézina was a Canadian professional ice hockey goaltender who played seven seasons in the National Hockey Association (NHA) and nine in the National Hockey League (NHL), all with the Montreal Canadiens. After being signed by the Canadiens in 1910, Vézina played in 327 consecutive regular season games and a further 39 playoff games, before leaving early during a game in 1925 due to illness. Vézina was diagnosed with tuberculosis, and died on March 27, 1926.

The 1927–28 NHL season was the 11th season of the National Hockey League. Ten teams played 44 games each. The New York Rangers won the Stanley Cup beating the Montreal Maroons, becoming the first NHL team based in United States to win it.

The 1928–29 NHL season was the 12th season of the National Hockey League. Ten teams played 44 games each. This was the first Stanley Cup final that saw two United States-based teams compete for the cup. The Boston Bruins defeated the New York Rangers two games to none in the best-of-three final. 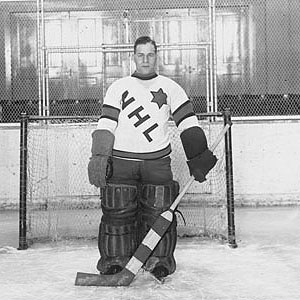 Charles Robert Gardiner was a Canadian professional ice hockey goaltender who played for the Chicago Black Hawks in the National Hockey League. Born in Edinburgh, Scotland, Gardiner moved with his family to Canada as a child. Playing all of his junior hockey in or around Winnipeg, Manitoba, Gardiner joined the Black Hawks in 1927. He played seven seasons with Chicago, winning two Vezina Trophies for allowing the fewest goals, was named to the First All-Star team three times and Second All-Star team once in recognition as one of the best goalies in the league. In 1934, Gardiner became the only NHL goaltender to captain his team to a Stanley Cup win. A few months after winning the Cup, Gardiner died from a brain hemorrhage brought on by a tonsillar infection. When the Hockey Hall of Fame was established in 1945, Gardiner was named one of the inaugural inductees. 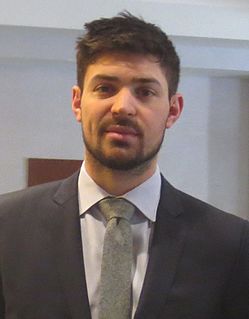 The 1976–77 Montreal Canadiens season was the Canadiens' 68th season. The team is regarded to be the greatest NHL team ever composed. The Canadiens won their 20th Stanley Cup in 1976–77, taking the NHL championship. They set an NHL record for most points in a season by a team with 132 points. They outscored their opponents by 216 goals, a differential average of 2.7 goals per game.

The 1972–73 Montreal Canadiens season, the club's 64th season, led to the Canadiens winning their 18th Stanley Cup in club history.

The 1959–60 Montreal Canadiens season was the club's 51st season of play. The team had another outstanding season, placing first in the league and winning the Stanley Cup for the fifth consecutive season, and the 12th time in team history.

The 1944–45 Toronto Maple Leafs season was the club's 28th season in the NHL. Toronto finished in third place in the regular season, with a 24–22–4 record, earning 52 points. The Leafs eliminated their archrivals Montreal Canadiens in the first round of the playoffs, and then defeated the Detroit Red Wings in seven games in the 1945 Stanley Cup Finals.

The 1987–88 Montreal Canadiens season was the team's 79th season. The club qualified for the playoffs, defeated the Hartford Whalers in the first round, but were eliminated in the Adams Division finals versus the Boston Bruins four games to one.

The 1968–69 St. Louis Blues season was the second in the history of the franchise. The Blues won the NHL's West Division title for the first time in their history. In the playoffs, the Blues swept the Philadelphia Flyers and the Los Angeles Kings, winning both series four games to none, before losing the Stanley Cup Finals in four straight to the Montreal Canadiens for the second straight season.

The 1964–65 Chicago Black Hawks season was the Hawks' 39th season in the NHL, and the club was coming off a second-place finish in 1963–64, as Chicago won a team record 36 games and also set a club record with 84 points. The Hawks would defeat the Detroit Red Wings in 7 games in the NHL semi finals, but would fall to the Montreal Canadiens in the Stanley Cup Final in another hard fought 7 game series.

The 1926–27 Montreal Canadiens season was the team's 18th season, and tenth in the National Hockey League (NHL). The team rebounded from its last place finish to place second in the Canadian Division and qualify for the playoffs. The Canadiens defeated the rival Maroons in a two-game series before losing to the eventual Stanley Cup winner Ottawa Senators in the semi-finals.